Many medals and lots of Bad Bass sweat

On Saturday, a bunch of us ran in the Brazen Bad Bass trail event at Lake Chabot. The weather was perfect and the event was, as usual, a blast. 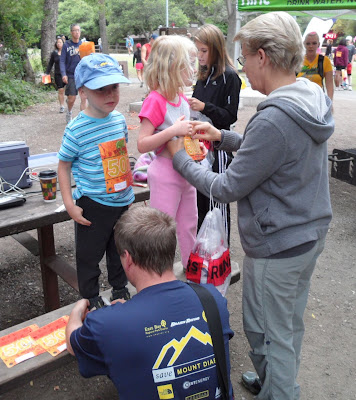 What was exciting about this was that all of the Notthatlucas's and the grandkids and their parents were participating. Even better, a couple of cousins from Ohio and Miss Irbua (not her real name) joined us. In this picture, the grandkids are getting bibbed up and timing chips put on their shoes. 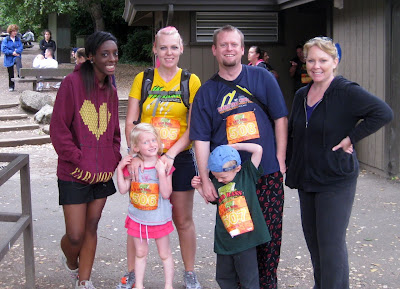 All ready to go and just waiting for the race to start. Well, Riley isn't quite ready - he's still trying to work out the most aerodynamic way to wear his hat. 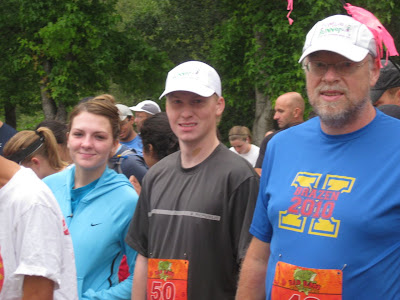 Nevar (also known as The Flirting Nun), The Boy, and I all ran the Half Marathon. Here we are lined up and ready to go (it started before the 5K). 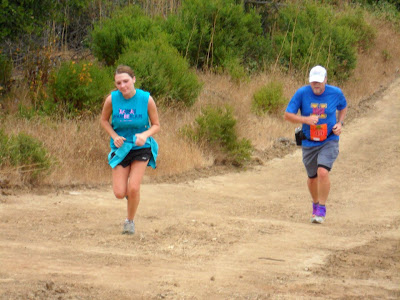 The Half had a challenging hill a few miles after the start. In this picture you see The Flirting Nun and I running up it. What you don't see is that we started running when we saw The Boy with the camera, and we stopped shortly after we heard the shutter click. 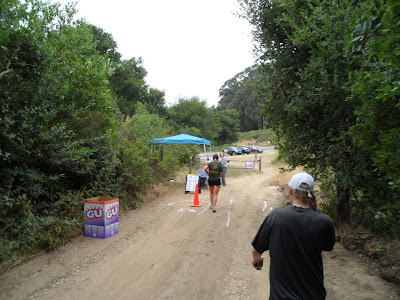 At the top of the hill was this wonderful aid station with lots of good things to eat and drink. It was hard not to just pull up a chair and call it a day. 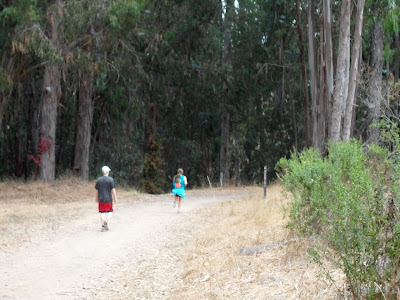 After that aid station, we headed off into the meat of the course, with lots of nicely wooded dirt trails. 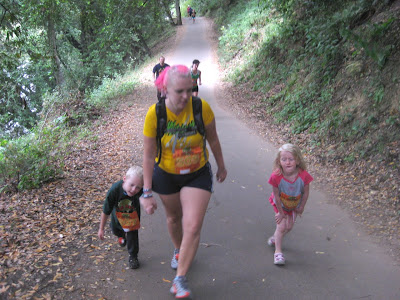 The 5K trail was fairly flat and mostly paved, but did have some hills. 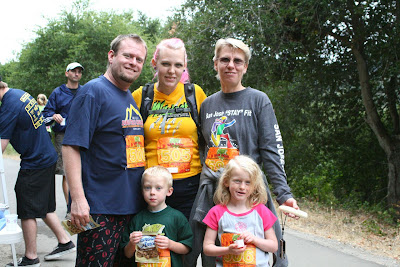 Some of the 5K people at their aid station. The promise of cookies and such is what kept the grandkids going. 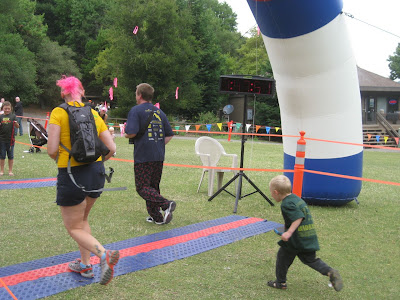 And go they did. Here you can see Riley really pushing to cross that finish line. He really got into it (when he wasn't distracted by a shiny rock, a duck, a tree, gravel, and so on). 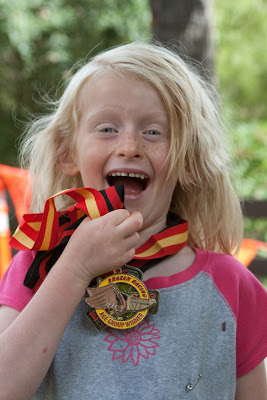 I love this picture! Brazen awards bonus medals to the first three finishers in each age group. Darci finished first in her age group, which really excited her (almost as much as getting to eat LOTS of cookies).

Actually, four of us finished in the top three in our age groups: Darci, Riley, The Flirting Nun, and, weirdly, me. (The Boy finished fourth in his age group, missing third by just a few minutes.) Now for the part we will never mention again - in all cases there were only three or fewer in our age groups. So, short of not finishing the race due to a refusal to leave an aid station, the four of us were guaranteed a third place or better finish. But that secret goes with us to our graves. 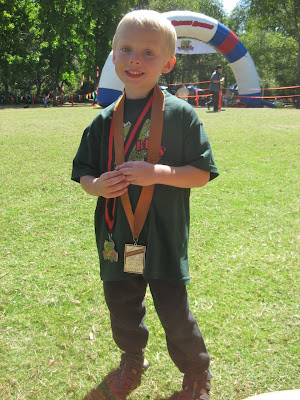 Riley with his two medals.

Now, back to the Half Marathon. 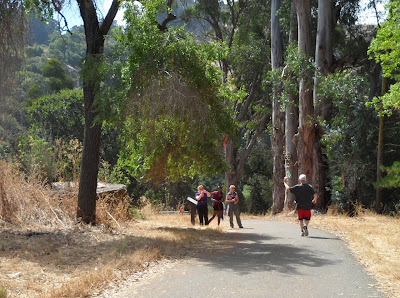 Rehtaeh, Irbua, and Mrs Notthat, once they finished the 5K, headed out on the Half course to meet up with us. This added another 5K to their day, meaning they effectively did a 10K, which was quite impressive. Here, The Boy is waving as he passes by them. Then he saw the camera. 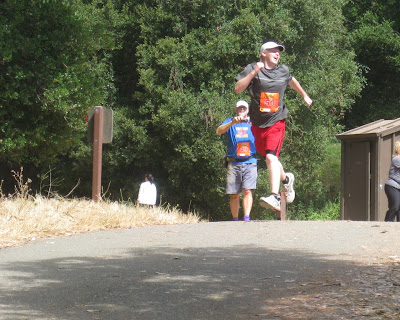 And did an amazing jump considering he had just run a bit over 11 miles at this point. 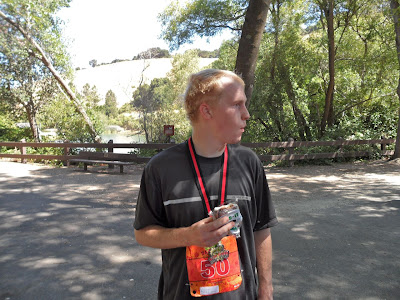 At the finish, The Boy enjoyed an It's It ice cream bar. These taste really good after doing all that running. 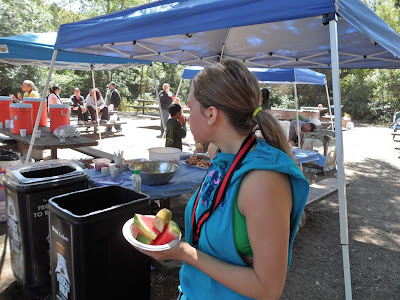 Weirdly, The Flirting Nun went for the fruit. 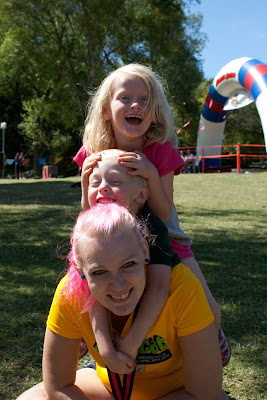 The grandkids really enjoyed the event and spent a lot of timing picking on their mom. 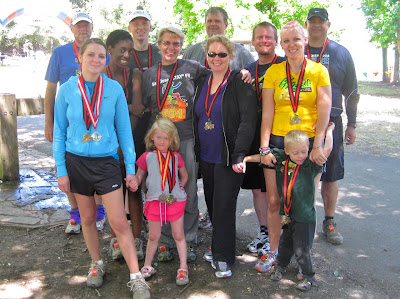 And here's the whole group with all their bling. In the back row, you also see Werdna and Luap, both of whom also did the Half.

For The Boy and The Flirting Nun, this was their first running event of any kind, and both did fantastic. I was a bit concerned about their endurance as well as them keeping themselves hydrated and fed along the way, so I hung with them and was their camel, carrying a water bottle for each. The Flirting Nun stumbled and fell once, but I didn't see it and didn't get a picture (and pleas for a reenactment fell on deaf ears). I fell once as well, and was also blessed with no witnesses (but with much more obvious trail rash).

My goal was to get all the Half people across the finish line, standing up, injury free, and in less than three hours. We all managed that, with a few minutes to spare.

My other goal was to introduce the grandkids and Rehtaeh to this sort of event, hoping they would get hooked and want to keep doing it. I think that worked too.

Everyone left happy and tired.

And asking for when the next event was happening.

I echo Ms. That. It's very nice to see Darci with her well deserved understanding of the Joy of Victory. And it's nice to see WHM and the rest of the family. You guys are obsessed. And it's great.

Great ~ I loved this post. So sorry about the fog in SF...we simply forgot it was the middle of summer.

Hi - I found your blog after Googling "Bad Bass Half" to get more info. I'm thinking about doing this race -- just how bad are the hills?! I saw the course elevation map, but I'd love to hear from a runner who's actually done this race. Ever since I moved back to CA a few years ago, I seem to (inadvertently) run in lots of hilly races. Thank you so much!

Hi Rhea! I like hilly races, so I might be a bit biased. This race (Half Marathon distance) has three hills of note: The first one is not so bad and was added for the New Years version of this race (I'm assuming it will carry over to Bad Bass since it got rid of a short out and back the Half people used to have to do). The second hill is tough, but it's over pretty quick (it won't feel like it at the time). The third hill is a surprise of sorts once you are getting close to done - you go down a hill to an aid station, then come back up it (my least favorite since it is late in the race). If you do the 10K you only have that second hill. Brazen races are great - I highly recommend them if you've never done one. This one is a medium compared to some of their other races, with respect to hills. It's pretty with a fair number of bathrooms around the course. Let me know if you have any other questions.

Awesome, thanks so much! OK, I am thinking of doing this race if I can get up to the East Bay from LA on Friday night, the night before the race. If I do, I'll look for you (assuming you're running it) to say hi.

my running blog (which needs to be updated): bexgirl.blogspot.com

Rhea - I'm planning on being there (look for the goofy guy with purple gaiters). From looking at your blog I can see you are much faster than me (most people are) so hopefully I will see you at the start at least.