Working Cardiac at the NFEC plus Bonus Dropbagology Thoughts


The North Face Endurance Challenge in the Marin Headlands is the last big trail race of the year. The amazing trails and $30,000 in prize money attract many elite runners, making this a great race to spectate at if you are a bit of a trail runner groupie.

I had never managed to run or spectate at this event, but this year it worked out that I could volunteer at the Cardiac aid station, where the 50M runners come through twice and the 50K runners once.

The 50M race starts at the very dark hour of 5AM, and I thought it would be fun to watch the start, then head out to the aid station. I figured it would take an hour to drive to the start, but I really was not sure what to expect congestion-wise (there's a one-way tunnel that can really back up traffic); the cool part was that as a volunteer, I had aVIP parking pass (which turned out to be worth WAY more than its weight in gold).

I was early. Seriously early. The encouraging part was that it wasn't raining. It rained on me all the way up to the Golden Gate Bridge, then stopped, and never rained on me again the whole day.

Eventually, 5 AM and the start of the 50M race arrived. The runners were broken into four waves, with the faster runners heading out first. I had hoped to recognize and yell at a few of the elites and friends when they started, but it was dark, and the headlamps made it really hard to see faces. It was fun to watch the start (it took about 8 minutes to get everyone out on the trail), but a bit of a disappointment since I was unable to locate most of the people I knew who were running. (Here's a link to a video I took of the later waves heading out.)

I managed to run into Asset, who as a complete surprise, had managed to talk Rehtaeh (not their real names) into coming along to work at Cardiac. I also ran into Nek (not his real name) who was also working at the aid station. We drove up to the Pantoll parking lot where we were to pay $8 to park, and then have to walk 0.7 miles to the actual aid station.

A really great surprise was being met there by a race official who paid for our parking and gave us a nice muddy ride to the aid station.

Normally, the Cardiac aid station is a bit of a confusing intersection of the trails, with runners going in different directions depending on the distance they are running and whether they had already been there (for the 50M distance). The week before this race though, had been really rainy and had forced a couple of course changes, the biggest being abandoning going down to Muir Woods due to a bridge that had washed out. 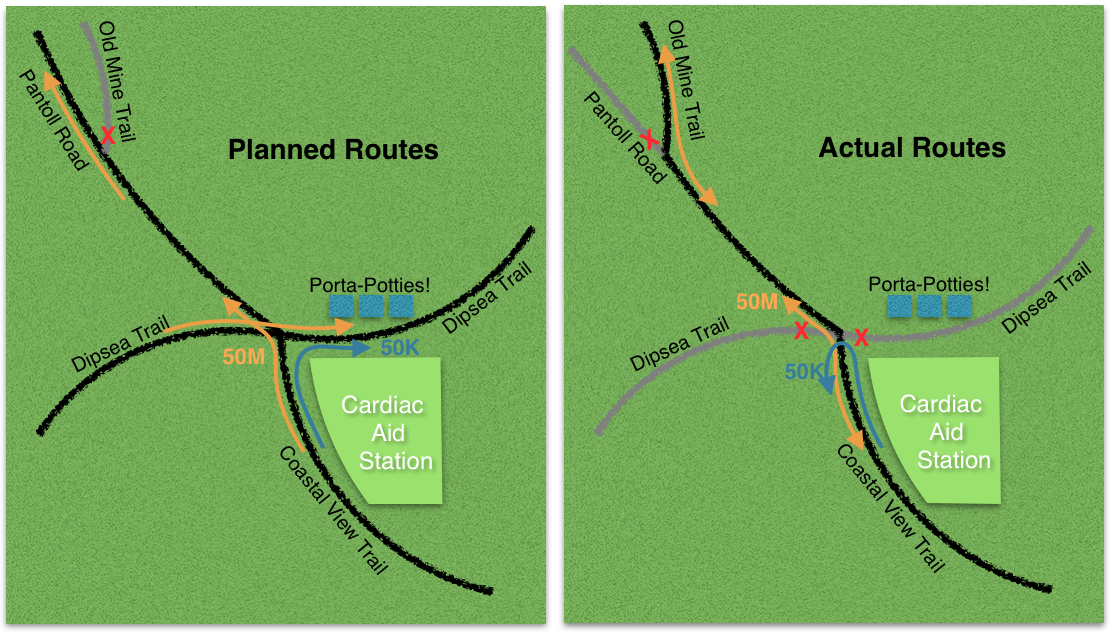 As we were setting up, one of the trail marking runners appeared and told us that a brand new change had just been made due to three trees that had fallen overnight, blocking the Dipsea trail from Stinson Beach. As you can sort of see in the above drawings, all these changes actually simplified our aid station significantly. 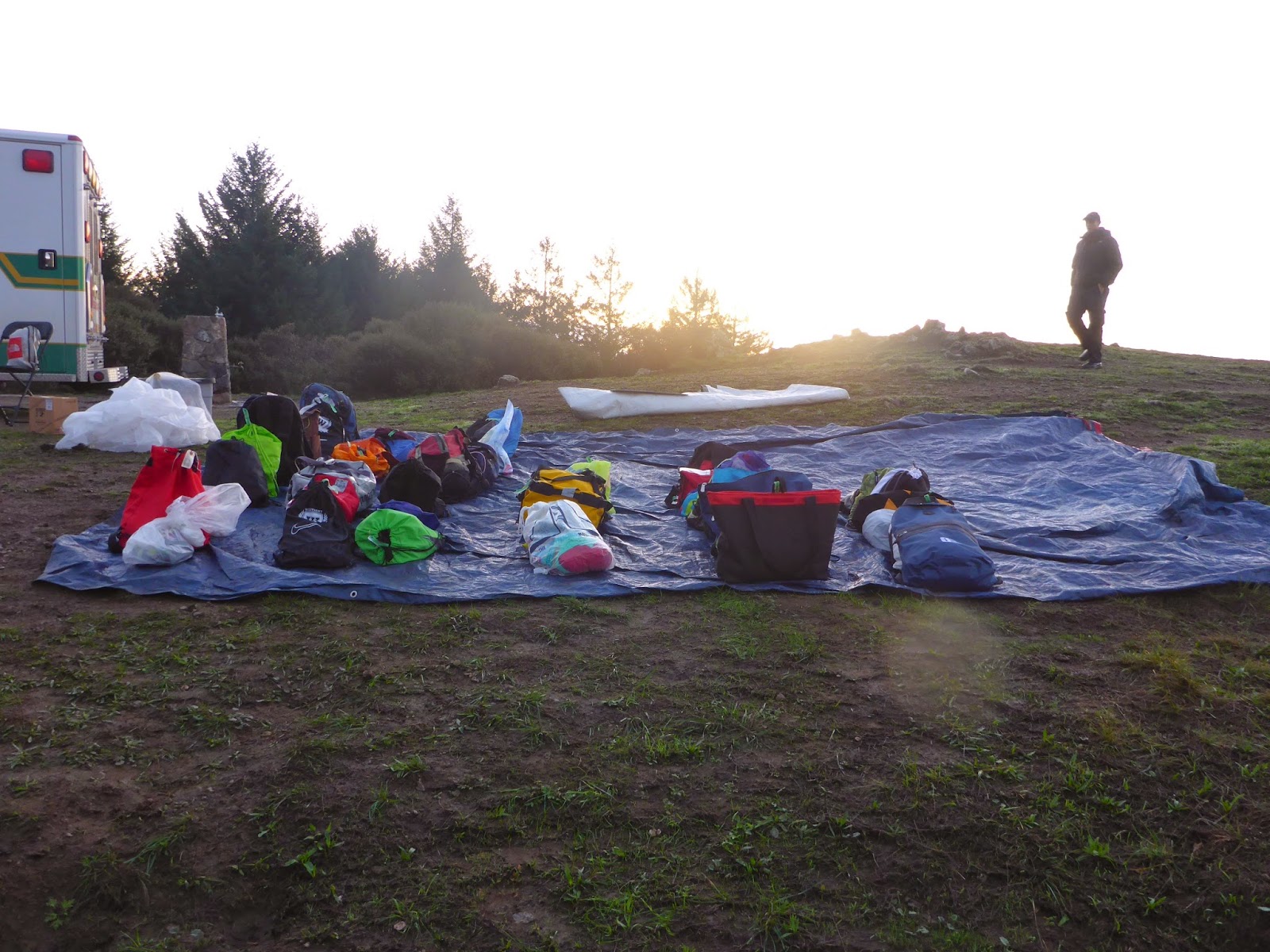 Nek and I volunteered to be the primary drop bag guys. The 50M runners had the option to provide a drop bag for this aid station. There were about 600 50M runners, and we had about 50 bags (those from runners that had turned then in on Thursday or Friday). Not all runners provide a drop bag, but most do, and it was obvious we were missing a LOT of them. (The rest of them, those turned in just before the race, showed up a couple hours later in two vehicles. Unfortunately they were too late for the faster runners.) 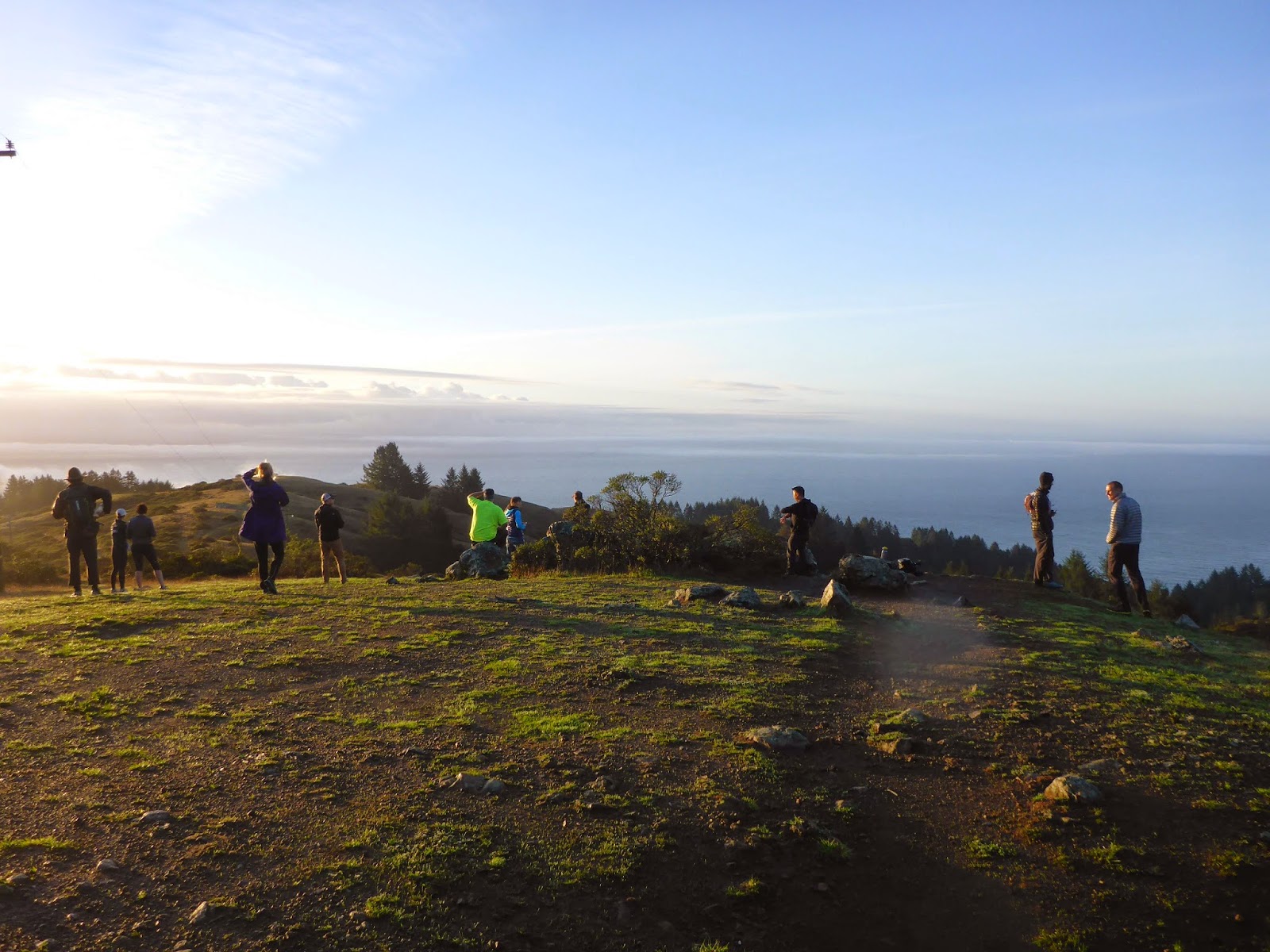 Since you cannot park at the aid station, I figured we would have very few, if any, spectators show up. I was wrong. Some were there for specific runners, but many were just groupies like me.

The first runner appeared at about 7:45. Asset (in yellow) had the job of putting an "X" in a tiny square on the runner's bibs as they showed up. This proved to be totally futile since the bibs were wet and even a Sharpie was unable to leave a mark, and the runners generally arrived in bunches, and with $30,000 on the line, they were not inclined to wait in a line. So the bib marking was abandoned very quickly. (A better idea would have been to have a hole punch. An even better idea would have been have timing tag readers here since there was no practical way to deal with the crowds.)

When the rest of the drop bags showed up, we had no time to do any proper sorting, and instead had to be happy with just setting them in groups of 100. This made finding the proper bag significantly harder than it should have been, but we quickly learned a few key questions to ask to help in the search (our goal was 10 seconds or less). This made the day harder than it needed to be, but most runners were understanding and were thrilled when we were able to find their bag. 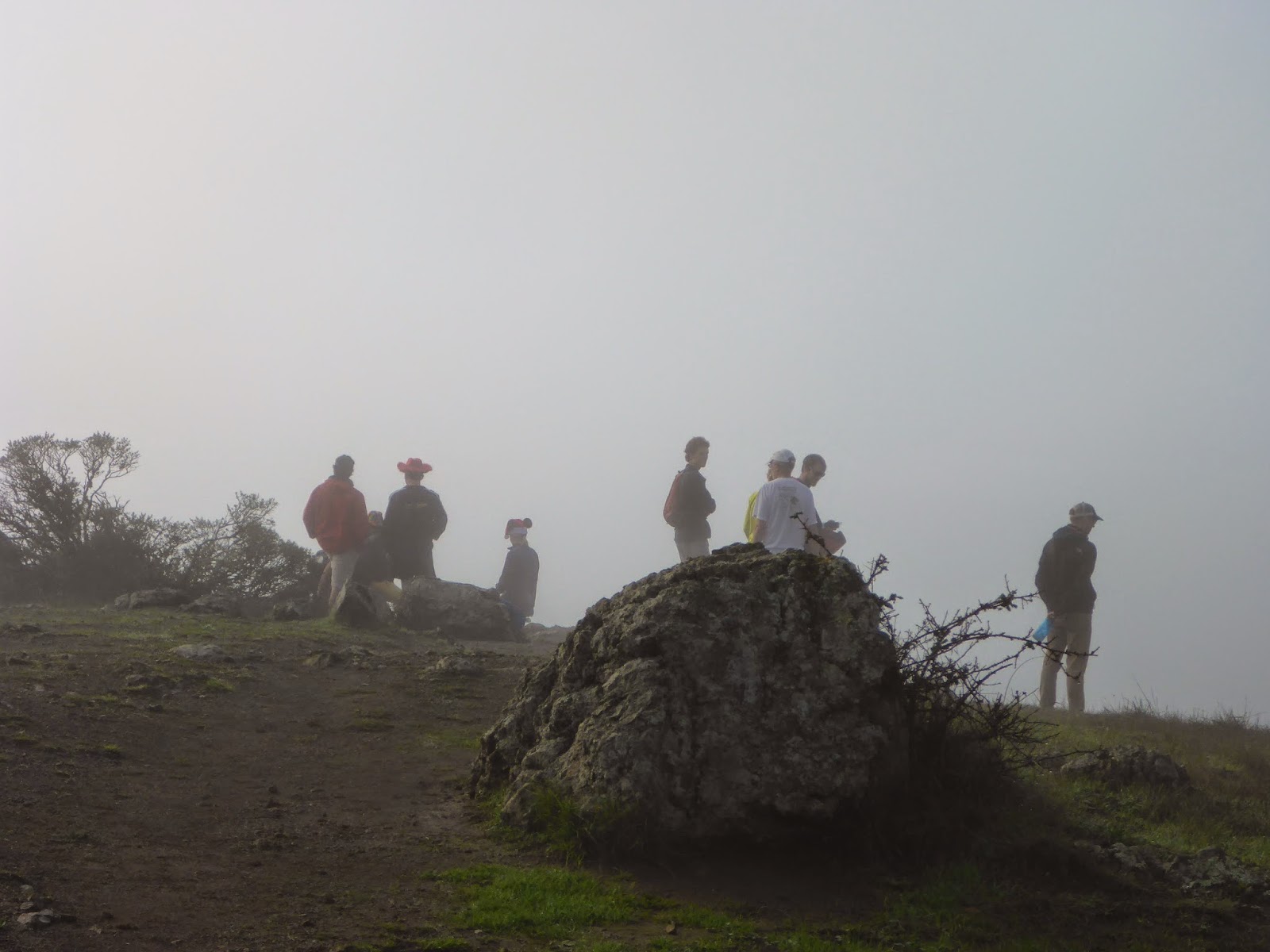 We had sunshine until about 9 AM when the fog rolled in. We were all so thrilled to not have to deal with rain and wind that a bit of cool fog was not an issue at all.

I've worked many trail race aid stations, including at Western States and HURT, and came into this race figuring it would be about the same.

The sheer number of runners was shocking - for most of the day we had a crowd at the aid station. It was a challenge tracking their bib numbers and pointing them in the right direction, and that doesn't begin to count the complexity of the drop bags (since we saw the 50M runners twice, we often had to go looking for a bag we had found about three hours earlier).

The thing that boggled me was how much harder this would have been if the course had not been forced to be simplified - just directing the runners was a big task.

Fortunately we had just enough volunteers and we had Veejar running the show efficiently with his own particular charm and perkiness that kept everyone chugging along.

We ended up with far more runners dropping here than I would have thought (the lack of easy access made this an inefficient place to be driven out of, not to mention you had just climbed a huge hill - hence the name Cardiac - with some big downhill from here (especially for the 50K). The trail conditions though were very challenging, which I'm sure helped many of the drops to decide to be done.

As far as supplies, there were very few slip ups in addition to the drop bags arriving so late (we were supposed to have baggies to put the runner's headlamps in for returning to the start area, we had no salt caps, and came close to running out of cups), but we never ran out of any of the important things like water, soda, soup, and toilet paper. A nice, thoughtful touch was bringing sandwiches for all the volunteers.

The biggest disappointment working this aid station though was that I missed seeing several friends due to just being so dang busy.

A big question is whether I would volunteer to do this again. I think so, but I would probably skip going to the start first, just to get a bit more sleep. It was a huge blast watching the fast runners fly through there (and there were a LOT of them), with the huge bonus of seeing so many friends.

Most long (50K or longer) trail races offer the option of a drop bag - long races can have multiple bags. The idea is that a runner can put things in a bag, like food, clothing, a headlamp, and such, that they might need once they get to that point in a race. They also offer a place to stash something you no longer need, such as a jacket.

For this race, a lot of runners changed their socks and shoes since the wet and muddy conditions made a mess of the ones they started with. The obvious problem is that it takes time to change your socks and shoes, and it's not like the trails were suddenly dry - your dry, clean shoes were going to quickly match the ones you just changed out of.

The only other aid station I've volunteered at with drop bags is Last Chance at the Western States 100. There were three things that made that a lot easier than at NFEC: 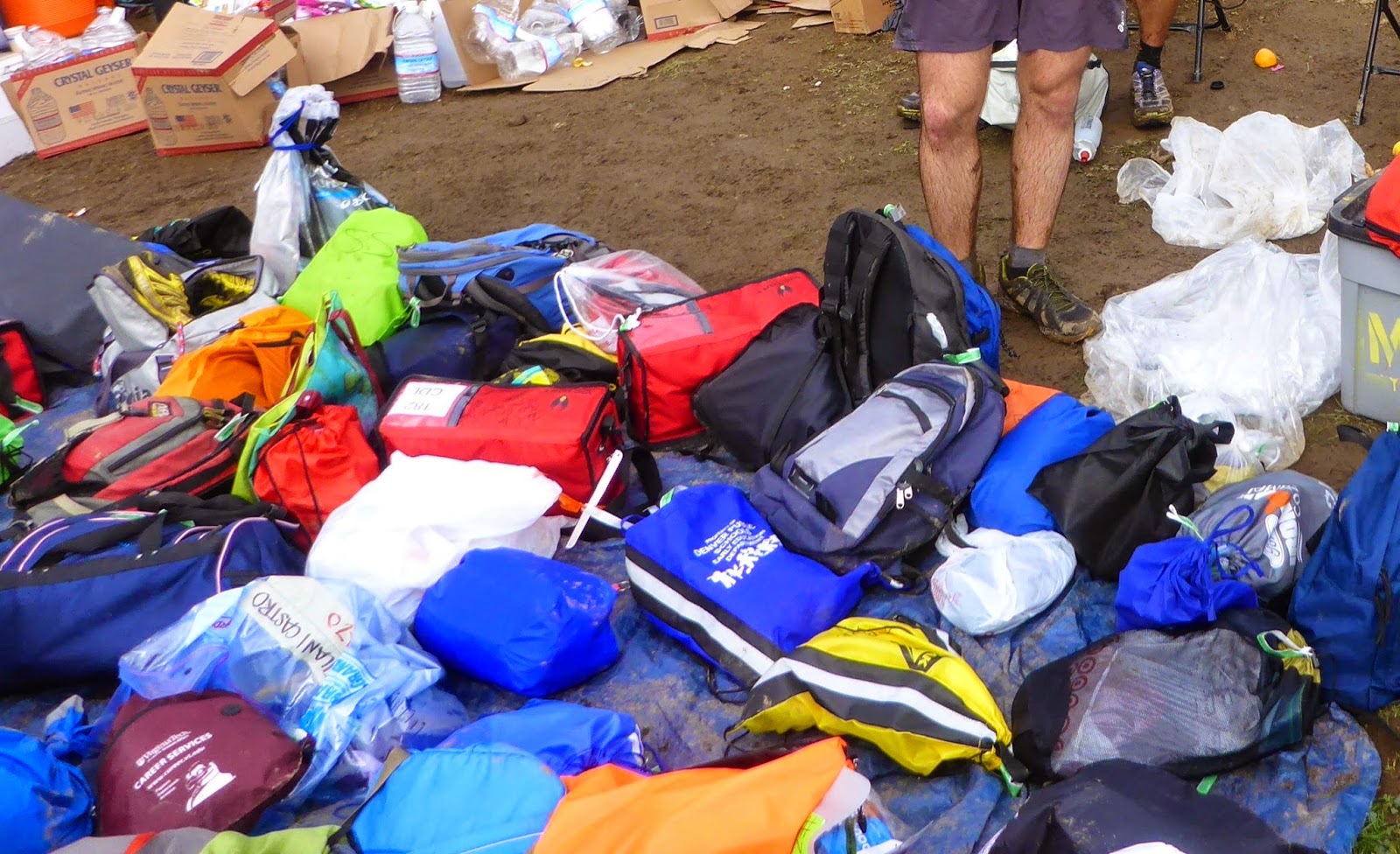 Just about anything can be a drop bag, including ziploc and grocery bags. By far the best bags were the Victory bags (the red rectangular ones you see above) since these could easily be marked on their top.

If you look really hard, you can see the small green tags that were used to label the bags. These made it really challenging when trying to locate a particular runner's bag. Obviously, the more unique the bag, the easier it is to find, and if you want to speedily get through an aid station, that can be a big help. The other big help was that some runners wrote their bib number in nice big digits. (On the other hand, some runners had several numbers from previous races written on their bags, which was the opposite of helpful.)

One problem I saw often was that the green tags fell off when the bag was opened. This makes it tough to locate your bag later, whether on your second pass through here or at the finish line (the bags are all hauled to the finish line once the station closes). A good alternative was to use a strip of duct tape and to write your bib number in large numbers.

Another problem was that a lot of the bags were not secure, and things fell out of them. Once that happened, it was impossible to work out where they belonged, and those things ended up going into a lost and found box.

There were also a number of random pairs of shoes and socks left out that I suspect runners did not want to put back into their bags since they were such a mess. Some wise runners put empty plastic bags in the drop bags just for this reason. Others tidied up their bags when they returned.

It was a bit of a learning experience working with these drop bags, and hopefully one I've learned from.

Awwww, who am I kidding - learning like this is not my strong suit.

PS: You can see more of my pictures here.
Posted by notthatlucas at 6:26 PM 6 comments: