I really like the Razorback Endurance Race. In an effort to do her best to create a race director's nightmare, but a runner's panacea, Tracy has grown this event into something for just about everyone.

It's primarily a timed race, with 24 hour, 12 hour, and 6 hour events. There is also a 100 mile event that can have up to a 36 hour cutoff. For the 6 hour race there were three start times you could choose from: early Saturday, late Saturday, and early Sunday.

Not enough options? You also got to choose your preferred course:
One thing you can't do, is pick a course then change your mind. So choose wisely. (And if you do choose wisely, you just might find yourself a winner. But I'm getting ahead of myself.) 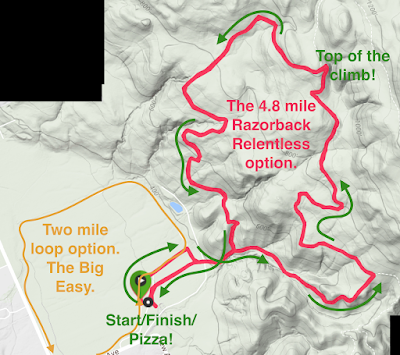 I ran this race a couple of years ago - at that time there were more distance options and I tried for a 100K (and ended up with a 50K) in what turned out to be a mudfest when a storm passed through. Last year was similar - a big storm put a damper on the race. (Rain doesn't affect the paved course much, but that trail course quickly turns to soup.) So this year, the race was pushed back by a month or so to reduce the chances of rain (and given how wet this winter has been, that was wise).

Last year I ran my second 50 miler at the Run-de-Vous race that just so happens to use that same Big Easy course. I knew that I could handle the flat and paved, but given a choice, I will almost always opt for the trails. And so I did at this year's race.

And I was the only 6 hour runner to do that.

There's a good reason not to choose the trail course for the short 6 hour event - it takes longer to get a lap done. For a lap to count, you have to complete it before the time expires. Each 2 mile loop might take you 30 minutes or so. If you finish a loop with 45 minutes left, it's safe to go out and get another lap done. For the trail course, I figured it would take me about 90 minutes to get a lap done. If I finished a lap with 45 minutes left, I'm pretty much done - there is no chance of me getting another lap done in time, which meant the trail course, if your timing was bad (mine was), would end up leaving you with a good chunk of useless time left. 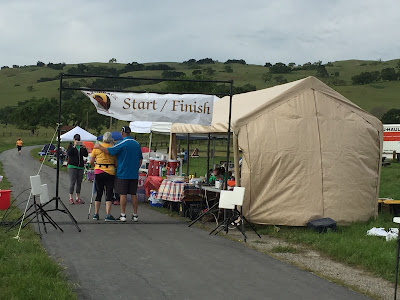 Not only was I the only one to choose the 6 hour trail option, I was the only one to choose to start at 6 PM (with my finish being at midnight). I am not a night person, but races at night fascinate me. Plus I get to sleep in (the other options started at 6 AM). 6 PM was also the end of the 12 hour race, and I got to see a couple of fun finishes. 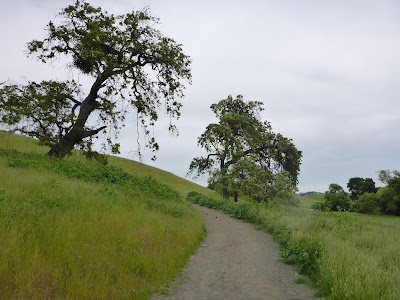 The first quarter mile or so of the trail course is on the paved loop trail, then we veered off on a gravel trail. By starting at 6 PM, I was going to get to do a lap in daylight, which was a good thing since it allowed me to get reacquainted with the course.

It was so green with the wet winter, but the trails were almost completely dry. They were a bit chewed up in places (apparently the cows use the trails for dance practice when it rains), so you needed to be a bit careful where you stepped, but that just added to the charm. 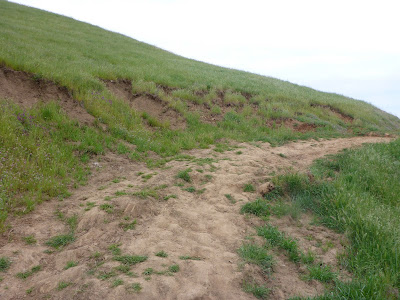 I was surprised by areas like above, where the hillsides had slid onto the trail. This would have been nearly impassable back when it was muddy.

Once you got to about halfway up the climb, you turned onto this fun single-track trail, often lined with those maiming plants.

There were cows. And the cows seemed to enjoy tormenting the runners. They would stare at you as you came up on them, blocking the trail, playing a game of chicken with you. In the end, they would always get out of your way, barely, and let you pass. But if you were at all uncomfortable around the cows, I suspect this course was pure misery.

I think in reality, there were only three or four places over my first two loops where the cows were this close. (Once the sun set, I never saw another cow.)


My first lap ended up taking 1:14. The climbing was harder than I remembered, but that was largely because I haven't done much training on hills this year. If I could keep up this pace, I should have been able to get in four laps pretty easily. But, this was in daylight on fresh legs, and I doubted I would be able to make as good time coming down that hill in the dark. Still, four laps became my realistic goal.

I wasted little time starting my second lap, figuring I could at least get the climbing bit in before it got dark. The climb definitely felt harder this time though.

It had been very overcast the whole time I had been there, but as the sun set, the clouds started breaking up, making for some really nice views. 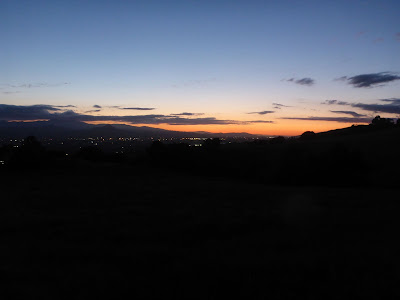 About halfway down the climb of that second lap, I finally turned on my headlamp since seeing the trail was getting dicey. But the sky was almost completely clear. (Sadly, the moon wasn't scheduled to arrive until about 4 AM, so when the sun set, it got really dark.)

I finished that second lap in about 1:26 - it had taken me 2:40 to get two laps in, which meant I couldn't fool around much if I wanted to get four in before my time was up. So I headed out almost right away.

And almost right away, my wheels fell off. The lack of hill training really caught up to me on the third lap - I struggled on any kind of an uphill. I even resorted to something I rarely do during a race - I pulled out my headphones and started listening to a podcast. This made me a bit nervous since, who knew what was lurking along the trail (frogs - it turns out there were LOTS of frogs lurking), and it would be good to hear whatever was going to eat me.

Even once I hit the top of the climb, I was unable to get my legs to do much of anything useful. I was really surprised at how quickly my race turned south. I started doing math (bad idea) and realized that getting four laps in was going to be really challenging. 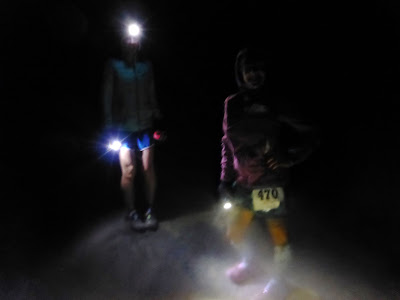 During my three laps, I ended up seeing four runners total, including Catra (above, on the right - you'll have to trust me a bit on that) as she headed out for yet another lap (she ended up doing 21 laps and winning the 100 mile trail  race - this after marking the course the day before). 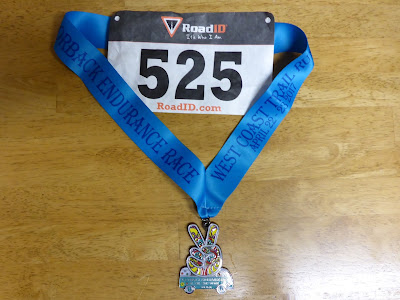 That third lap ended up taking me 1:44. It had taken me 4:24 to go three laps - I had 1:36 to get a fourth lap in. But I was toast - I had a hard time believing that I could get another lap in faster than that third lap, and if my fourth lap took longer than 1:36, it wouldn't count. So I ended up saying "uncle" with about an hour and a half on the clock, which was sad.

This is where, being on the two-mile loop, I could have probably gotten two more laps in.

So this was a pretty underwhelming performance, although honestly, I was fine with it. I was able to get some hills on my legs, I got my longest distance of the year done (14.4 miles), and I had a lot of fun playing with the cows, snakes, frogs, and views the trails gave me.

And since I was the only 6 hour runner that chose the trail course, I ended up being the winner!

A couple of years ago Mrs Notthat and I, along with The Boy and his squeeze, headed back to Colorado to do a trail race. I ran the Half and The Boy ran the 10K. Weirdly, it turned out he was the only guy in the 10K, so he won it by default, and got a nice trophy for it. He wasn't very comfortable with any of that, but I told him to enjoy getting a win. And now, here I am in a similar boat. I got a win. But there needs to be a large asterisk next to it.

This was a blast, and I would still make the same choices. I would like to be better trained though. Tracy and her team of ridiculously perky volunteers made this a blast - the food options available were amazing, making it challenging to get out of the aid station to go get another lap done.

I'll be back next year, and may even try to talk Tracy into a 12 hour event that starts at 6 PM.

PS: You can see more of my pictures here.
Posted by notthatlucas at 3:31 PM 1 comment: