… or "How I kept from going totally insane for four months."

Along came the GVRAT

Mr. Lake (not his real name, and I would be surprised if he would even answer to it), or Laz as he is more commonly known, recognized that there was a need for a summer challenge. Mr. Lake has a knack for coming up with challenges. (Barkley Marathons, Big's Backyard Ultra, A Race for the Ages (ARFTA), and others.)

He had already established a very challenging race across Tennessee called the Last Annual Vol State Road Race. It's 314 miles from a spot on the northern end of the state to a spot on the southern end. From Missouri to Georgia. With no aid stations. And a ten day cutoff.

Like going across Tennessee, but the long way, diagonally, from a point at the southwest corner to a point at the northeast corner. The longest possible distance. And even though it's virtual and people would cover the distance while staying near home, it needed a real course - not a straight line as the buzzard flies.

It was billed as a 1000K course (math people will want to call it a 1M course), but precision is not a strong point of Mr. Lake, and it ended up being just under 1022K. Or right around 635 miles.

But we had four months to finish, from May 1 to August 31. 123 days.  All you had to do was cover about 5.2 miles per day. Every day. You could choose to cover 20 miles on one day and take a few days off, and many took that approach. Others, like me, took the approach of consistently shooting for  around five miles a day. You could start in June or July and just cover more miles per day and catch up.

A quirk of the course was that you spent a considerable amount of time outside of Tennessee. The first 25 miles was spent in Arkansas (followed by spending a stupidly long time trying to get across Memphis). At a bit over halfway, you dipped down into Georgia. And as you neared the finish, you found yourself crossing into Virginia for about 30 miles before dipping back down into Tennessee to finish. Very much not the way a buzzard would fly it.

Speaking of buzzards, a fun addition to the race was a wake of buzzards (I looked this up and find it appropriate) as pacers. Important point (maybe) - they were all female. A second important point - they never took a day off. Your progress was always with respect to a buzzard. Their names:

And I should also mention the Gingerbread Man. Not a pacer, but a "runner" intended to lead the whole way. And he did.

I managed to make it across the state in 118 days (along with 257 others). I had no double-digit days and no zero days. I'm proof that just about anyone could take on this challenge. (The biggest finish day was the next to the last day, day 122 with 841 finishers. The final day had 632 finishers.)

I decided to create a spreadsheet to track my runs/walks and progress. (The column with sporadic green shows whether I am ahead of the buzzard or behind it. The blue cells indicate runs as opposed to walks. There was a lot of walking done.) I kept thinking of things to add to it as I went along, and because of it, I can give you a few of my stats:

I spent a remarkable amount of time wandering around in our neighborhood. A typical day would be a morning dog walk followed by a lunch or evening run/walk - always with my eyes set on getting around five miles in.

I tried to make the neighborhood miles as interesting as possible, but they still got very redundant. Early on, there was a lot of chalk on the sidewalk that would help. 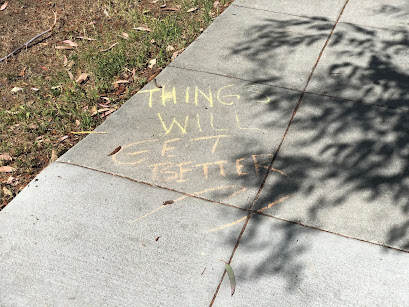 Another huge help was that the city restricted traffic on a nearby street which made it much easier to navigate while dodging others. 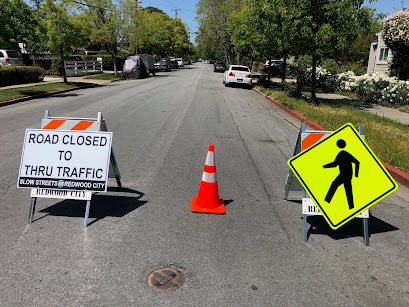 I must have passed this fence 50 times before I noticed that someone was using it to store gum for later. 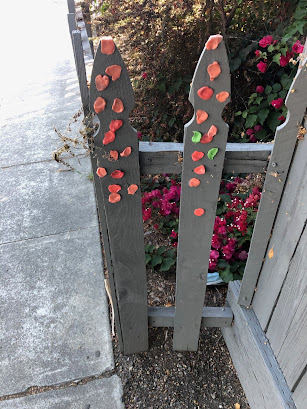 In the end, the neighborhood miles were fine. And wildly better than treadmill miles.

How did others do?

When Laz set up this event, he hoped for maybe a couple thousand people to sign up. Maybe 3,000. He ended up with nearly 20,000 people registered.

And immediately had some technical issues to deal with, such as how do you handle that many people trying to log miles every day for four months. I can only imagine the flood of emails that would come in daily about one issue or the other. After some growing pains, it became a fairly smooth process to log your miles every night, and then in the morning, you could look in a massive table to see your progress.

One thing that amazed me was how I could wind up at some random mile point, say, 413.2 miles, and look at the table to see that there were maybe 40 others at that exact same point. It was fun to picture what this would have really been like if we were all actually on the roads.

Not all 20,000 finished. 326 people never logged a single mile. 818 never even made it to Tennessee and are still wandering around Arkansas. But 13,737 did make it across.

A group I find interesting are the 32 that made it at least 99% of the way but didn't finish. (99% would put you within 6.5 miles of being done.) 10 ended at about 99.9% - most less than a mile from the finish. Some of those I believe were competing to see how close they could get to finishing without actually finishing. (Look, nobody ever said runners don't come up with stupid ideas and goals.) I do worry that some of those were runners that truly thought they had finished, but really needed just a bit more - and that makes me sad.

I'm sure Mr Lake will get an email or two.

There were also a lot of runners that had issues come up - maybe an injury, something in the family or at work - that severely restricted the time they could spend on this. Those people will be able to continue logging their miles for a bit and eventually reach their goal, and they are awesome.

And then there are the over-achievers. Those that wanted more miles. More crossings. More buzzards to chase after.

One thing that came up was whether you could enter your miles in multiple virtual events.

As it became apparent that real races were not going to be happening this summer, a number of race companies jumped on the virtual race bandwagon. There were a LOT of races similar to this that involved crossing a state (Mrs Notthat and I ran the Maryland version). There were a number of races that involved supporting local race companies (we did several of those too).

Because GVRAT was four months long, there was a lot of overlap. Which brought up the question - if I run eight miles, can I log it as eight miles for multiple races (double-dipping) or do I have to split it between the races?

All the virtual races I saw explicitly allowed you to double-dip, which makes sense since most of them were not really races, but more like training programs designed to give you a goal to shoot for. In my mind, I looked at them as ways to support local race companies and didn't feel the slightest bad about using my miles for two at once.

A number of people decided to not double-dip - if they ran simultaneous races, they ran miles specific to each race. That's pretty awesome, but well beyond what I would be able to do. If I had taken that approach, I would have only been able to participate in one race at a time, and GVRAT at four months would have been all I could have done. (Some of those people avoided GVRAT just for that reason.)

And that's about it

This event was challenging but fun - pretty much exactly what I was looking for. In addition to the event's large Facebook group, there was a Northern California-based Facebook group started by Jen where we could commiserate and whine about the buzzards. Laz would regularly post insightful things that covered everything from his bewilderment at people that refused to read the rules or do a tiny bit of research on their own, to inspiring things that made you feel great and maybe convinced you that, in spite of what you were thinking, you really could get this done. 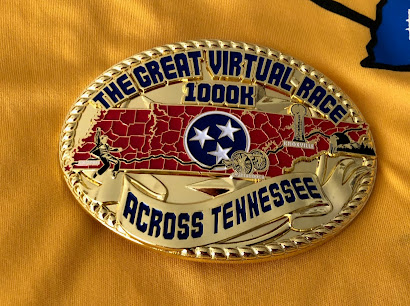 We were to have the choice of a buckle or medal once we finished, but by the time I finished, all that was left were buckles, which was fine by me. 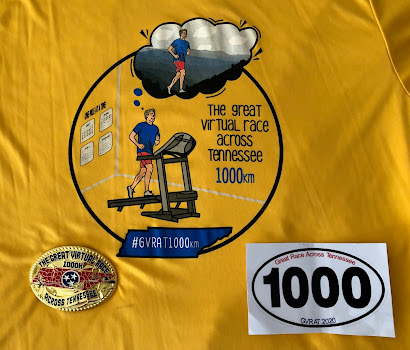 Everyone that registered got this shirt. The "1000" sticker was included with the buckle. 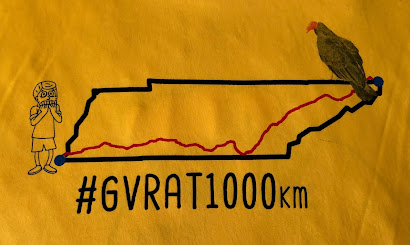 The back of the shirt, with one of those stupid buzzards.

Laz and his team really outdid themselves for this event. For almost all of us, this was going to be our one shot at participating in a Lazarus Lake event.

Well, until he created another audacious event - the Circumpolar Race Around the World (CRAW). I don't know much about this - I've been avoiding looking into it very closely - but it makes going across Tennessee look like a walk around the block.

For now I'm good with being a RAT.