Note: For you old people who hear the word "streak" and immediately think of that 70s fad that, well, got some people running in a minimalist fashion (and inspired a song called "The Streak" by Ray Stevens), you are about to be disappointed. Sorry.

I listened to Ultrarunning Podcast's interview of Wally Hesseltine this week and it got me to thinking about running streaks. Wally is a Bay Area legend - on a whim of sorts he decided in the early 80s to run a Marathon, and has run at least one race every month since, with over 500 finishes, 200 of which were of an ultra distance. He came on to my radar last year at Western States, where he missed the 30 hour cutoff by a bit under two minutes. At the age of 71.

And then I stumbled on an article in Newsweek about Jon Sutherland, who is credited with the longest known current streak of running at least a mile a day - for 17,546 days (since May of 1969). That's astonishing.

We have many local runners who have done or are doing long streaks as well (I think Catra Corbett is up to something amazing, especially considering almost none of her miles are flat and only running a mile would be a day off for her).

All of this got me to thinking what sort of streak I might have going on. (Spoiler alert - not much.) My records aren't nearly as detailed as Wally's - I don't track what passes for workouts or training, for example - but they provide the basic information I needed for this.

From the standpoint of longest streak of at least one race run a month, my longest streak was 56 months (Sept 2010 to April 2015). The streak was broken in May of 2015 for reasons I can't figure out. I don't think I was injured, but maybe. (March seems to be the leanest month for races for me.)

From the standpoint of longest streak of at least one race run, volunteered, or crewed a month, that streak is at 90 months and counting. In that 90 months (since my first Brazen race in January of 2010), there have been three months that I didn't actually run a race, which surprises me since I figured injuries would have knocked me out more than that.

On Feb 4, I ran the 10K at the Inside Trail Runs Fort Ord race, and that started a streak of running a race for 18 weeks in a row. To be clear, only three of those were Half Marathon distance - many were 10K and 5K, with one weird 1.5M race thrown in when I really should have known better. So, as cool as that streak sounds, it wasn't really all that impressive - it mostly meant I had too much free time on the weekends and nothing better to do with the bit over $1000 spent on race registrations. (I did win outright two of those races, although I was the only runner in that distance for both of those, so, well, a win is a win, I guess.) In any case, I'm not doing anything race-wise this weekend, so that will break the consecutive weekend race streak. 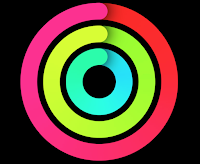 I have an Apple Watch, and probably the thing that comes closest to justifying it are the activity rings. (For those of you not familiar with the rings thing, I put some details in the PS at the end of this post.) For the month of February, work had a "Close the Rings" challenge where the goal was to close all three rings every day.

Starting on Jan 23, I had a streak of closing all three rings every day up to June 7 - 135 days of at least walking/running a mile or more. And I missed it on June 7 because the universe was against me (well, and I mostly forgot about it):


And that was it - the game was getting more and more tense, it was getting later and later (if I do any kind of exercise too close to bedtime, which is 9 PM for me, I have a really hard time sleeping), and my knee and IT band issues were not thrilled, so I called it a streak, went back to the bedroom, and finished watching the game.

I was pretty sad about that streak getting broken, but it actually has been a bit of a relief - I really need to give my issues time off, and that streak thing was keeping that from happening.

In 2010, Brazen Racing noticed that three runners had run all 15 of their races that year. It hadn't occurred to anyone that something that bizarre would ever happen, but since it did, and since it would likely never happen again, Brazen surprised those runners with an amazing shadowbox containing all that year's medals.

In 2011, those three plus fifteen more ran all the races. At that point, Brazen knew this was a real thing and decided to run with it, giving the streakers their own numbers, a shirt, the shadow box, and a red carpet ceremony.

It's now a yearly tradition for people to try to streak all the races - there are now 173 streakers, many of which have struck multiple years - even though it's significantly harder to do now that there are 27 Brazen races during the year. Making it through that gauntlet of races and not having some sort of conflict come up is a pretty astonishing feat.

For reasons unclear to me, Mrs Notthat decided that this would be our year to take a shot at streaking. We've made it through 11 races so far, and the 12th, Double Dipsea, will be claimed not by running but by volunteering (which is a perfectly acceptable way to claim a race - all the rest of our races, barring injury, will be claimed by running though).

So that streak is still going along. But the challenge of not missing a race in the next seven months is going to be huge.

And then last night, the Warriors, who had won 15 playoff games in a row, had that streak snapped.

Streaks are a weird thing - they can be really impressive, but they can also ramp up the stress and cause you to do things you likely wouldn't normally do. They can also be a lot of fun and maybe even sometimes worth the trouble.

PS: Here are the ring details.

There are three rings:


The Move and Exercise rings can be looped multiple times if you are doing something particularly strenuous (pretty much any race for me). You get "awards" for some random accomplishments.

Posted by notthatlucas at 1:35 PM 3 comments: