That was a long time between Half Marathons!

Back in May of 2017, I ran the Coastal Horseshoe Lake Half Marathon.

It was my third consecutive weekend running a Half, and it turned out to be my last Half for almost a year. My dodgy knee was starting to complain so I started doing shorter distances.

Then it was time to volunteer at Western States. My knee was feeling much better by then, so I was no longer wearing my brace. (You should be hearing that kind of music now that precedes a bad thing happening.) 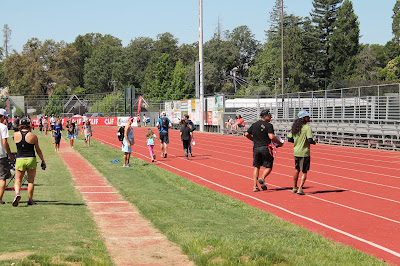 After the Last Chance aid station closed, I headed down to the least technical bit of the course - the track that the runners use to get to the finish line. I knew a ton of people in the race, so I spent a lot of time taking pictures of them as they came in the gate and ran the track to the finish. On my second to last runner, I ran on that grass bit and managed to step in a small hole that tweaked my nearly healed knee in a way that caused more pain than that knee has ever known. It was a total shock - just a very freak accident.

I ended up spending the next three months hobbling along doing a bare minimum of races (we were streaking at Brazen, and even their 5Ks can often be really challenging). I started working in some 10Ks in the fall and winter, and finally decided in late January that I could try to do another Half.

The Brazen Coyote Hills Half turned out to be really special. It was Mrs Notthat's 100th lifetime Half. (She had been sitting on 99 for several years!) At the race, she was significantly ahead of me, and I was really dragging (my fitness was shockingly lacking). The course is two laps of a 10Kish course, and I decided to drop at the end of the first lap since I really wanted to be there when she came in (Not a Canadian had warned me that she had something up her sleeve), and there was no way I was going to finish within an hour of her.

Then everything changed. Mrs Notthat took a nasty fall - other runners coming back at me on the out-and-back bit of the course were warning me that it was not good. The fact that I didn't see her going past me on that bit of trail confirmed that things were not great. She turned out to be at the aid station getting bandaged up. "It's only a flesh wound" was what I imagined her saying. She was seriously hobbled, but still determined to get the Half done. The problem was that she was now going to be pushing cutoffs if she wasn't able to move reasonably well.

So now my Half was back on - I was going to stick with her and keep her moving well enough to get past the cutoffs and get this done (or make her stop if she was really struggling). We started out pretty slow as she worked out how bad things were, but started to pick it up a bit. Now I was back to worrying whether I could keep up with her, but was determined to stick it out.


Near the end of that first lap, we were fine on the first cutoff. And Not a Canadian was waiting there. We explained what was going on and she volunteered to pace her around that second lap (even though she had already run a fast 10K). I vowed to follow along, but soon realized I had no hope of keeping up with the two of them. So I cut my second lap short and headed back so I could catch her finish.

Enough about her - back to me. This DNF convinced me that I needed to up my training before I took on another Half. The good news was that my knee did not rebel too strongly at the nine or so miles I did get in.

All of which made me decide to target the Brazen Diablo Challenge Half Marathon. If you use elevation gain to judge whether one Half is harder than another, this Half comes in at Brazen's seventh hardest - just barely beating out Lagoon Valley and Wildcat. But something about it always makes it harder than it should be.

The fun thing about this Half is that there are so many creek crossings, and this year, most of the creeks had significant water in them. We had significant sun too, although it wasn't that hot (low to mid 70s). All I wanted to do was to finish, and to do that, I had one cutoff I had to make. Three hours to get to mile 7.9 seems absurdly generous, but so many of those miles are uphill. And it goes without saying, my fitness was still not suitable for a race like this.

So I gave myself a couple of outs - if things were going badly, I could turn around at the 5K or 10K turnarounds.

The race started fine, and I kept my speed well under control (like I had any other options). 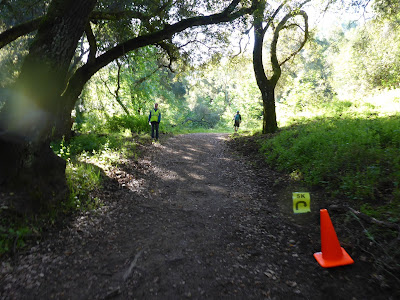 When I arrived at the 5K turnaround, I was feeling fine, so I kept pushing on to the 10K turnaround. 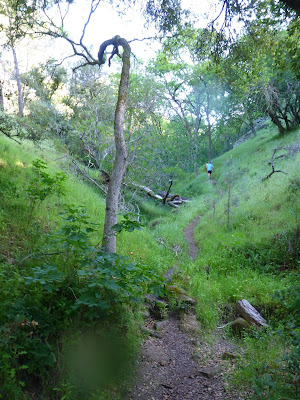 Shortly after the 5K turnaround, we jump off the wide more or less flat trail onto this single-track, and our first of two small warm up climbs. These would largely determine whether I was going to finish this Half or not. 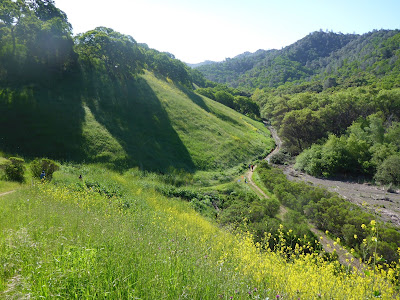 After that second climb, you get a nice downhill that's just long enough for you to forget the nasty things your brain was telling you back when you were slogging up that hill. The 10K turnaround was coming up quickly.

By the time I made it to the 10K turnaround, I had largely forgotten how those small climbs had taxed me. So I pushed on. From here on, there were no easy outs until you finished the real climb, and if you can manage that, there is no good reason not to finish (assuming you make the cutoff).

This was about mile four, and it had taken me 75 minutes to get there. I now had to go four more miles in 105 minutes. But that four miles had about 1400 feet of climbing. The climb did have a few small breaks (and LOTS of false summits), but you would find yourself swearing every time you gave back some elevation, knowing you were going to have to make up for it shortly after.

This trail is challenging - it's completely exposed so, even though it wasn't really hot, the sun took its toll on you. But the clear skies and climb rewarded you with astonishing views. (Not enough of a reward, but it helped.)

I had hoped to do this stretch without having to pause, and I did pretty good, but did end up pausing a couple of times to catch my breath (and convince myself that this wasn't really the stupidest idea I've ever had). When I finally spotted that third aid station (the one with the cutoff), I was thrilled. Near death, but thrilled.

It ended up taking me about 85 minutes to cover that four miles, so I was well within the cutoff (and I wasn't last either!). I was happy that I would be able to take a few minutes here to gather myself.

I left the aid station about 12 minutes before the cutoff, and of course, started going uphill. There isn't a lot of climbing left though, but by now these small hills seemed daunting.

Once I hit the long downhill, I was happy that I was able to run, even if it was very slow.

After about a mile though, I started having a sharp pain in my inner thigh, no doubt caused by me compensating for the knee. So I started walking for a bit, and the pain went away. Once I was closer to the bottom of the climb, I tried running again and all went fine. Well, other than me being totally exhausted.

Yaj had finished his race a bit over two hours earlier and was now out taking pictures of us mortals. He got this shot of me that does an amazing job of making me look like a real runner! 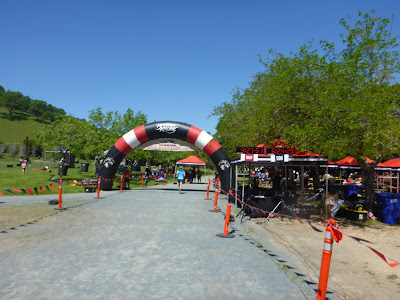 And then finally, the finish arch. It was all I could do to avoid giving it a big sweaty hug.

And then I was done. I had survived the Half. My muscles were amazingly sore, but my knee held up fine. This was my seventh finish of this Half course (there are two Brazen races a year that use it), and a bit more that 20 minutes longer than any of them at 4:27. I was number 272 out of 286 finishers. (I was the only one of six in my age group to not finish in under three hours  - old trail runners are tough and fast!)

It was awesome to get this finish. I'm not sure it was wise, but a week later, I'm feeling recovered and happy to have that Half monkey off my back. Getting farther than the Half distance might be a bit out still, but I'm more confident that that's just a training issue, which can be fixed.

PS: You can see more of my pictures here.
Posted by notthatlucas at 2:05 PM 1 comment: