Horseshoe Lake is up on Skyline Road in the middle of nowhere (right Ynot, not your real name?) with no cell service.

It also had no heat.

It was surprisingly cold at the start, with a frostbitten breeze that was way out of place in California spring time. 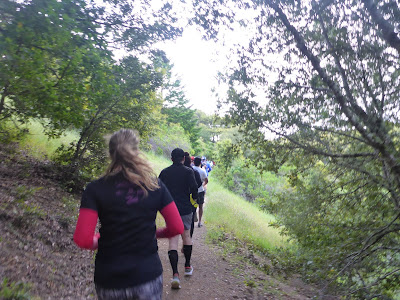 But the cold was mostly temporary - once we started on the trails, we warmed up pretty fast. We started with a sprint  through a parking lot, allowing us to sort ourselves a bit by speed, then turned on to some fun single-track. It was a bit of a conga line for a while, but it went fine.

The course is not flat, but the climbs are fairly modest. (There is 1800 feet of climbing for the out-and-back course.) 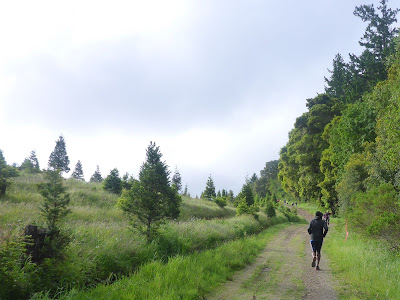 After a bit, we ran along the edge of the woods on a wider trail, and the conga lines were no more.

Ironically, many of these trails are notorious for being hot and exposed. Heat was not an issue today.

It wasn't long before I started seeing the faster runners already heading back. I get a huge kick out of this sort of thing.

Our aid station was near the turnaround, which meant we got to see it twice. "Just go out a bit less than a mile and you'll see the turnaround." What was not said was "And you'll have to climb a hill to get there. Both ways."

This was my first race where I had to grab a rubber band to prove I had gone all the way to the turnaround, which was pretty exciting! The surprise was getting to choose the color of rubber band that I wanted. I stood there trying to decide, then grabbed a purple and a blue one, felt bad for being greedy (there must have been a thousand rubber bands there - there was no chance of them running out), put the blue one back, started to leave, had second thoughts, paused, then rolled my eyes and forced myself to be happy with the purple one.

On my way back I started seeing the longer distance runners heading out for their second lap of the course.

Just before I ran into Mrs Coastal, I had seen a boy charging out on the trail that I didn't realize, until it was too late, was Coastal First Born. (He had a pacer, but I swear he was trying to drop her.) Mrs Coastal got this picture of me:

Mrs Notthat was wise and ran the 5M race, which interestingly used a completely different trail than the Half course. Mrs Coastal got this picture of Mrs Notthat gliding on some downhill:

I was getting close to the finish and was happy about that. I went into this race knowing I wasn't going to be fast - I had a goal time of 3:30 or so. At the turnaround I was already up to 1:45, and since negative splits are not in my wheelhouse, it looked like I was going to be doing good to finish in under four hours.

Once I was back to the lake, it dawned on me that I actually still had a chance at beating 3:30. What I hadn't realized was that the course was mostly uphill to the turnaround, which meant it was mostly downhill back to the finish, and I had been making reasonably good time (for me).

I started pushing a bit harder with that 3:30 goal in sight. Even the allure of toy dump trucks couldn't slow me down. 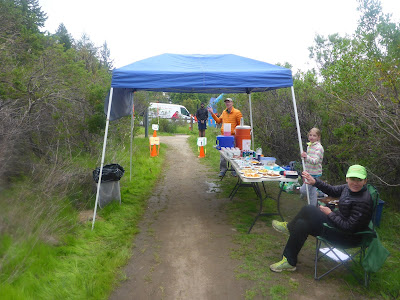 A funny thing about this race - there is an aid station about 50 feet from the finish. It's for the long distance people who turn around and head back out to do the course again. They made sure I didn't stop, tempting as it was.

And that's about it. I ended up at 3:30:59, so with some generous rounding, I can say I hit my 3:30 goal, which was a huge surprise given my time at the turnaround.

This felt a lot harder than a Half with 1800' of climbing should feel, but the variety of trails, views, and high fives on the out-and-back made it go by pretty quickly. A huge thanks to the volunteers and Coastal for putting on such a fun event - I'm so glad we finally got to run this thing!

PS: You can see more of my pictures here.

Posted by notthatlucas at 9:25 AM No comments:

"Training" for a Half!

That title is supposed to be a joke/pun of sorts - I think I read somewhere that the best jokes/puns are those that need to be explained.

The Brazen Racing Western Pacific event has a train for its mascot. Training is something I have been failing at recently, so running a race that involves a train (even if it's just the image of a train) charging down the trails made me reach a long ways for that title.

This was also a bit of a momentous race for me - it was going to be the first time since November of 2015 that I would be doing races of at least Half Marathon distance on consecutive weekends. I was a bit surprised by that statistic - it's not all that meaningful but I would have bet money that I had accomplished this at least once last year. (It was also going to be my 13th racing weekend in a row, so it's not like I've been spending all my time eating Pringles and watching Monkees reruns, although, there was a lot of that too.)

The course is not too challenging to follow - it's basically a lollipop with a bit of the stick exposed at the top of the candy, but the proper bit of the stick goes on forever. It's pretty much flat on wide gravel trails, with some bonus pavement in the middle.

Note the blue sky and sunshine. This is a course that can really do you in with heat - it's mostly exposed, and that long out-and-back bit forces you to deal with the sun and wind relentlessly. But today was pretty cool, so overheating did not appear likely.

Of the four distances offered at this race (5K, 10K, Half Marathon, and the Full Marathon that's also an official Boston qualifier), the Half had the most runners. Because of the Full going on, it meant the Half runners had no real cutoff to worry about, which, combined with the flatness and many aid stations, makes this an attractive first Half.

A kind of fun thing about how the course is laid out is that we spend time running along a fence that separates us from the long out-and-back bit. I got to see a number of friends running the Full that were about three miles ahead of me.

The first and last part of the course is spent hanging around Quarry Lakes.

There was no early start option, as happens at most Brazen races, so I got to see some runners that I don't normally see.

The first aid station was at about mile 1.8. We would see this aid station later. In my case, much later.

At this point, we left the lake area and started on the long trail along Alameda Creek.

Our second aid station was at mile 3.3, and also served as the 10K turnaround. 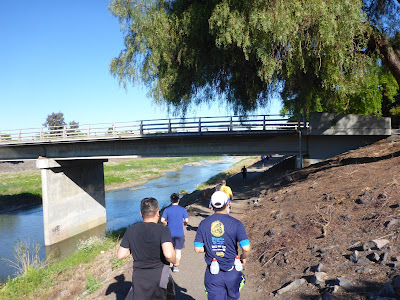 Almost all of our climbing was due to going under these overpasses.

The third aid station was at about mile 4.6. As much as I whine about how exposed this bit of trail is, you'll note that there are also a lot of trees providing shade.

There is an odd stretch randomly in the middle of the long out-and-back where the trail is paved and includes a bit where you borrow this road's bridge to cross a creek. 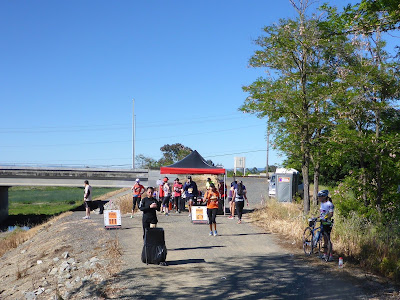 The fourth aid station was at about mile 6.75. This aid station was great for two reasons: It was the Half turnaround and it had a porta-pottie (of which I took advantage). A third reason was that the lead Full runner just happened to pass through as I filled my bottle.

This was the end of the stick, so most of the rest of my race was retracing my steps back to that first aid station.

The trail along the creek isn't my favorite - on the left are people's backyards - but the creek is pleasant to look at.

This is a popular trail with the normal people that live around here, and it was fun to see so many of them out walking their dogs. 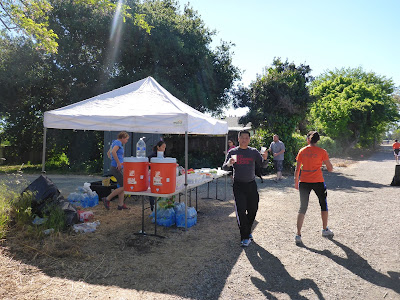 The fifth aid station (was third) at about mile 9.1.

The sixth aid station (was the prison second) at about mile 10.3.

This is where we turned left and headed back into the lake area. (Full runners kept going on a bonus out-and back.)

The seventh, and final, aid station (was the first) at about mile 11.7. The end of the stick and back to the lollipop bit. 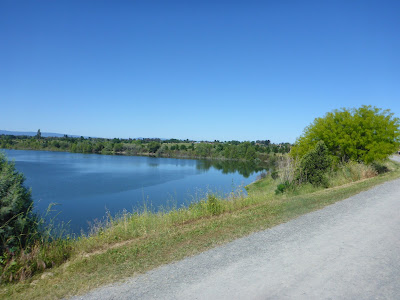 If you look really hard, you can see the finish arch over there. It was also starting to warm up a bit.

At this point, I was about 200 yards from being done. I was really tired and so thrilled to be so close. 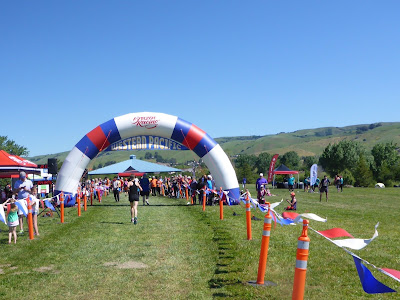 A fun thing - as I was slogging up the small hill to this chute, the winner of the women's Full blasted past me! So cool that I got to see her finish! 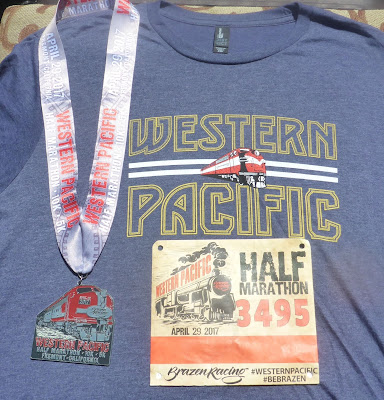 And that's about it. The race went pretty good for me - certainly better than I had any right to expect, with a sub-2:43 finish. I did end up with a weird blister (for me, anyway) on the back of my right heel, but beyond that, I was fine - just really tired.

This event requires a ton of volunteers, and they made it so fun. (Well, except for the whole grape peeling thing.) A huge THANKS to them and Brazen for putting on this event!

My second Half in two weeks went surprisingly well. Next weekend will push me even further as I go for my third Half in three weekends. And it will be a bit of a challenging course with actual hills.

I'm not sure what I was thinking.

PS: You can see more of my pictures from this race here.
Posted by notthatlucas at 2:14 PM No comments: