Loopiness has its place

There are several events that take advantage of the roughly one mile loop around the Crissy Field Marsh, creating timed events for runners to test their endurance with little risk of getting lost or being far from aid. I like timed events and the views of that area seemed like they would be perfect for breaking up the monotony of endlessly running around that loop, but I had never managed to make it to any of these events.


So I was happy that it worked out for me to attend the Pacific Coast Trail Runs San Francisco One Day event, even if only for their shorter six hour duration. I knew a fair number of people running the race and knew it would be a blast, no matter how badly it went for me.

There are a number of challenges to this simple course - the mix of pavement and gravel, some very sharp turns, and some potentially bad weather (being right on the bay by the Golden Gate Bridge can result in very cold strong winds). And fog - always with the fog.

One other big challenge is that this area is heavily infested with tourists - the views of the bridge and Alcatraz are pretty stunning, and if it's a nice day, the beaches are a blast. The RD managed to schedule amazing weather for this race, which meant the tourists (and many locals) were out in force. Dodging selfie takers, many with bikes left scattered all over the place, made this a bit of an obstacle course, although it did help break up the monotony, and I'll take selfie congestion over bad weather any day.

The event started at 6 PM on Friday and went to 6 PM on Saturday. I think the Friday evening start was a new thing, but I'm not sure. It certainly added to the challenge for those in the 24 hour event since they either had to try to nap during the day or else start the race and immediately head into sleep deprivation issues.

For the shorter time runners, there was a bit of flexibility for when to start. Basically, a new race could start every 6 hours (6 PM, midnight, 6 AM, and noon). I took advantage of the noon start on Saturday, which meant I could sleep in a bit and would be on the trail as the 24 hour runners were wrapping up their races, meaning I had a chance to look fast by comparison. (I didn't.)

The start/finish area looked a bit like a homeless encampment - there were tents, chairs, coolers and a wide variety of other things randomly strewn about. Since I was only there for six hours, I had little need for much space - just somewhere to sit my bag with my bottles. The Amazing Karen was having none of that, and made me a really fun sign - I'm now officially the "Crazy Cat Guy" (which I was asked about by one of the other runners).

I think there were seven of us that started our six hour event an noon. RD Greg explained how the looping system worked - we had to run our first five laps in the clockwise direction, and after that, we could change direction any time we crossed the start/finish timing mat by immediately recrossing it at the end of a loop.

Being able to change directions like this is pretty novel, and I think a great idea. What it meant was that you ended up seeing runners coming at you as well as going in the same direction, which made for a lot more interaction than normal at these sorts of events.

It's not really possible to cut the course (you could cut a bit off, but it would be very obvious you were doing it), but it is pretty easy to falsely trigger the start/finish timing mat, potentially giving you credit for a lap you didn't actually do. With the ability to change directions, you had to try to remember which direction you were going if you stopped to rest, use the toilet, or eat at the buffet. Having a midpoint timing mat took a lot of the guesswork out of the process since it served as a "second opinion" on how many laps you did, and was not subject to the false triggers of the other mat.

Also, I'm not sure, but I think if you crossed this mat and had time expire before you crossed the finish mat, you would get credit for half a lap. (After my last lap, I was a sure I couldn't complete another lap in the remaining time, but I could have gotten to the halfway point. Granted, then I would have had to come back without credit for the return. But maybe I could have talked some tourist into giving me a ride on their bike.)

A nice thing about these timed events is that you really only have to complete one lap to be considered a finisher. This means runners can set their own goals, which don't necessarily have to be all that related to the time. Alina had her sights set on reaching the 100K distance, and it was so cool that she made it with hours to spare (which made her more than a bit thrilled!).

Loren had as his goal to hit 100 miles in less than 24 hours for the first time. He really pushed himself as was able to get it done with enough time left over that he could make several cool-down laps. (Those laps pushed him to fourth place overall!)

A funny bit - on one of my laps, as soon as I hit the bit that goes along the road, I heard "Pick it up NotThatLucas" over a loudspeaker. I worked out that it came from a passing Park Police vehicle. Tourists stared at me and nervously gave me lots of room to go past them. Ace was on duty that day and was able to spend a bit of time encouraging us while answering tourist questions ("That can't be the Golden Gate Bridge - it's so red!"). 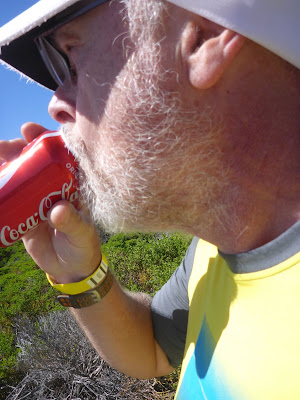 Two pictures of me in a row - sorry for that. Once I drained the bottles I brought, I switched over to rocket fuel.


The food that was available was really great (regardless of what that chicken's expression might make you think). Shrina and Karen made sure nobody went hungry or thirsty.

I ended up with 21 laps and a tiny bit over 22 miles, which was the furthest I had run since way back in August of 2016. This was pretty encouraging, especially since I came out of it with only normal soreness. It was extremely sunny and warm, which made the afternoon breeze actually fairly welcome. (And the sunburn unexpectedly fierce.)

This is from my Garmin. The little handle on the right is not part of the course though. 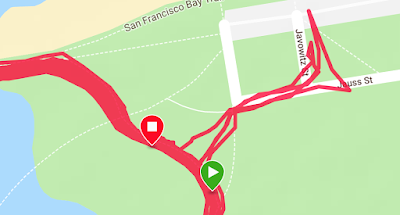 That handle shows my two trips to the bathroom. (I like how it looks like I had trouble finding the toilet, or escaping it.)

The course is reasonably flat.

But if you work at it a bit, you can make that "reasonably flat" look much more challenging. (This shows the one time I decided to try the counter-clockwise direction. I was surprised at how many people in the race that I almost never saw just because they were going the same direction as me.) Clockwise worked better for me since I was able to hug the "inside lane" and it seemed a bit easier for tourist management.

The race was a blast! It was fun seeing so many friends hit their goals and other friends pushing their friends to hit those goals.

Even those wearing chicken hats.

PS: Here's a link to more of my pictures from the day.
Posted by notthatlucas at 9:34 PM No comments: