While looking through a recent issue of Trail Runner Magazine (motto: "One dirty magazine!"), I came across a mention of the Tahoe Trail Running Series Emerald Bay Trail Run. There were four things that made this catch my attention:


So we decided to make a nice four day weekend out of the race.

Side note: We stayed at a place called the Beach Retreat & Lodge in South Lake Tahoe. It was really nice, and right on the lake with a nice beach, but there was a wedding every night we were there. The receptions were generally pretty loud, but always stopped at 9 PM. It was still pretty odd and got a bit old.

The course was on an amazing trail that went around the edge of Emerald Bay, passed through the famous (for something or other) Vikingsholm buildings, then along the shoreline of Lake Tahoe to DL Bliss State Park. 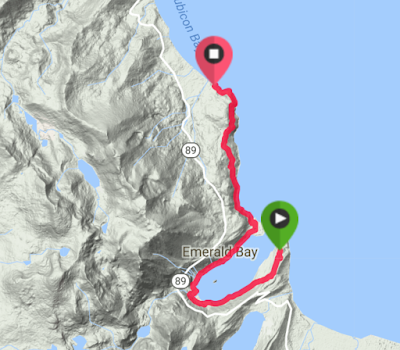 The "flat and fast" claim is apparently based on definitions of those terms that apply only to races in the Tahoe area. The trails were often littered with trip hazards and lots of stone steps and hills. Nothing horrific, but on a course with so many views, it was sad to have to spend so much time watching your step. Fortunately, I'm fine with not going fast and stopping frequently to take pictures.

The race started at the Lower Eagle Point campground at Emerald Bay State Park. This campground closed after Labor Day, so we had the run of the joint to ourselves, and were basically directed to park in the various campsites.

Because of the publicity and word getting around about how scenic this race is, they had about twice as many runners sign up this year (around 300) as last year. As tradition dictates, I started at the very back. 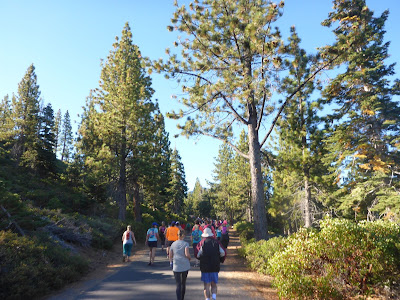 The race started with about a third of a mile on a paved uphill road. This seemed a bit odd, but it served as a great way to sort out the faster runners (namely not me) from the others before we made the turn onto the gnarly single-track downhill trail. 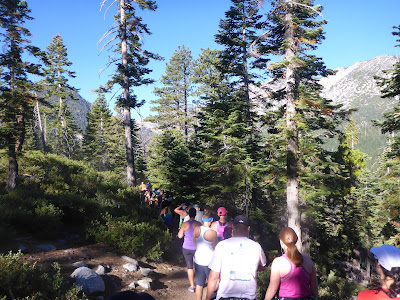 Once on the trail, it was a slow conga line for a while. I didn't mind much since going slow meant I could sneak looks at the views. 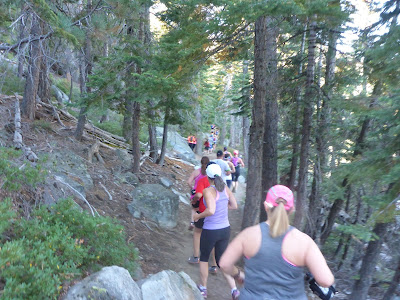 The downhill would have been pretty sweet to blast down without the congestion, but it did have its share of rocks and roots that likely would have doomed my blast.


The first couple of miles were pretty congested, but were also stunningly beautiful. There were a few runners determined to pass on the narrow trails, but for the most part, most were content to just keep moving at the group pace.

By the time we hit the Vikingsholm area, the trail was smoother and wider which allowed the runners to better sort themselves out by speed.

I knew we were getting fairly close to our aid station, and could hear a lot of noise coming from up ahead, so I assumed that was it. Instead, it was a group of campers banging pans and cups and making a ton of noise - it was truly awesome (unless you were camped close to them and hoped to sleep in). 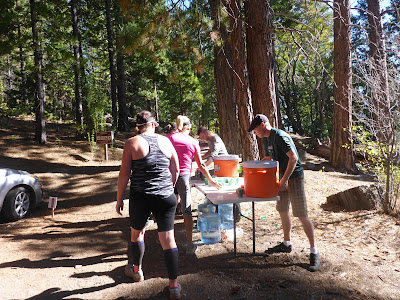 The aid station was at about mile 3.3 or so. I was carrying a large water bottle and had about half of it left at this point, but knew there were nearly four miles left and it was really warming up, so I topped it off (which ended up being one of my smartest moves this whole race). 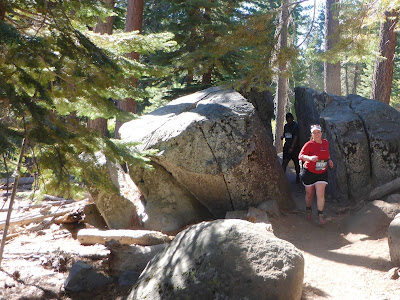 There were a lot of boulders to dodge along this course, especially in the second half. 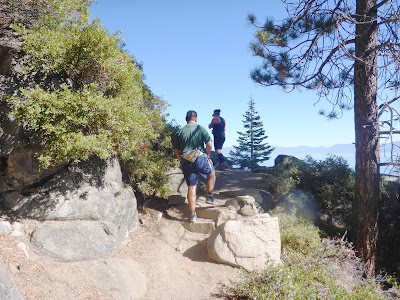 Then the main climb started. There was no elevation chart to look at before the race, so I really didn't know what to expect (beyond the "fast and flat" claim). This climb was not particularly steep (about 400 feet of climbing in a mile and a half), but it was a bit rugged with lots of steps and rocks. 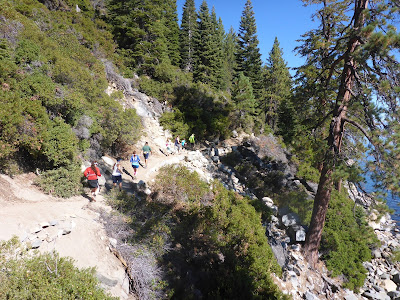 I had been looking forward to this downhill, and it was a lot of fun, even if you still had to watch your step. 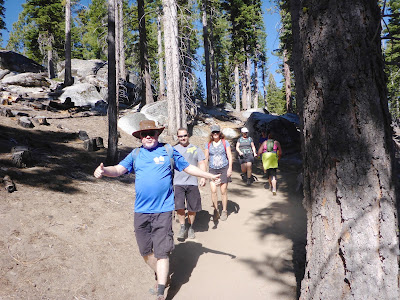 By now we were on a stretch of trail that had a lot of normal hikers on it. This particular group was loudly cheering on the runners. They even lied and said I looked good. 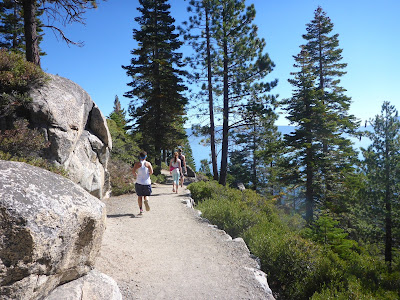 A lot of the trail at this point really lived up to the "flat and fast" claim. But wow, if you stumbled here you could fall for a long time. People were opening up the running during this part. Even I got into the act. (And yes, you should start hearing the faint sounds of ominous music at this point.)

The photographers were from Lefrak Photography, and they took some amazing pictures. The fun thing was that one picture of every runner was picked to be available for free (with the rest available for purchase). Even better, those free pictures were really stunning. This particular guy got these shots of us:

One thing to note in the above pictures is how smooth the trail was. It was shortly after this, with about a mile to go, that I managed to step into a small hole and become one with the trail. I got scraped up a bit, but the real issue was that my ankle was pretty seriously tweaked.

Sadly, I failed to take a picture of the hole or talk a passing runner into taking my picture. My running was done for the day, but I was able to hobble reasonably well.

Mrs Notthat ended up beating me by about four minutes - I think even if I had avoided the fall, she would have beaten me by at least a couple of minutes. For the record, this sand was not awesome on a damaged ankle.

There was a fairly long line for the beer, and standing in the sand was not something I needed to be doing in any case. Mrs Notthat verified that we were no threat for an age group award (a really nice thing was that they used five-year age groups!). There were other raffles going on as well, but I really needed to go take care of my ankle.

An odd thing about this race (and something to stress about if you are like me and prone to stressing) is that we were told we had to get our car out of that campground by 1 PM or it would be locked in until spring. The website said there would be a bus that held 15 people to shuttle us back to the car, and when I did the math about there being 300 runners and that the bus roundtrip would be 30 minutes (at least), I decided it would be good to get in the bus line ASAP.

As it turned out, the race people could do math as well, and provided two shuttle busses that held about 30 each. A bad thing was that the bus had to drop us off up at the main road and we would have to walk down to our car. Under normal circumstances, that would have been a fun downhill run to the car (about 1.3 miles it turned out - getting there early and getting a good spot worked against you at this point), but since I could only manage a hobble, this turned out to be a pretty long slog.

In the end, they controlled the gate out, and I'm sure they hung around until all the runners had made the shuttle back and gotten their cars out. Their real goal was to make sure someone didn't decide to make an afternoon of hanging out on the beach at the finish or get back to their car and take advantage of the empty campground for the afternoon.

I should have anticipated all this and not worried so much, but in the end it all worked out fine. (The ideal thing to do is to have a friend drop you off at the start and wait for you at the end. Another idea that crossed my mind was to finish the race, then turn around and do it again, this time with far fewer people.) 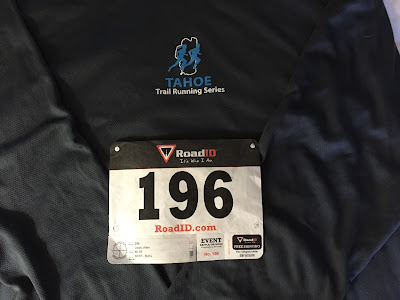 This race was a blast and well worth the effort to drive up from the Bay Area to attend. If your goal is to win, be sure to start up front and be OK with missing out on most of what makes this race so cool - the stunning views. If your goal is just to finish and enjoy the trails (which is the right way to do this race), do like me and just go slow and don't sweat the early conga lines. If someone can drop you off at the start and meet you at the finish, that's awesome and means you can really enjoy that beach area and the finish festivities. Even if that can't work out, it seems like they have it set up pretty good to get you back to your car, even if the math doesn't make it seem like it.

The Tahoe Trail Running Series has a number of events in the area, and I wouldn't hesitate to sign up for any of them based on this experience. (If you are a medal whore, you will be disappointed in this race though.) This was an amazingly beautiful course and I could see this race becoming an annual tradition for us.

Minus the ankle thing.

PS: I took a stunning number of pictures for a 7 mile race. I put all the useful ones here. You should be able to download them, but this is the first time I've tried to share this way (I miss the old Picasa way of doing things). Let me know in the comments if it works OK (or doesn't) for you.
Posted by notthatlucas at 3:14 PM No comments: