[Note: I apologize for how long this is. But it's mostly pictures so it's not as bad as it looks.]

Historically, the Double Dipsea race was held on Western States weekend, so I was unable to run it. That changed last year and I was thrilled to take a shot at the race.

I missed a cutoff with only about 3 miles to go. I decided then that I didn't need to run the race the next year. But when the registration opened up earlier this year, Mrs Notthat was really keen to run it for her third time in a row. I rolled my eyes and signed up too.

Ironically, Mrs Notthat ended up getting an injury and had to miss the race. This gave me an out - it really isn't as much fun for me to run these races without her, so it would have been easy to bow out. But there was a pretty big part of me that was ticked off with how the previous year went down. I reread my race report from last year and realized that I really should not have a problem finishing this race - it's just a slightly long and slightly tough Half Marathon and I would have 5:19 to finish.

But like Rocky Ridge, this is a race with a mystique that really gets in your head.

Above is a simplified course map. In this case though, just because it's an out-and-back doesn't mean you can't get lost - there are many places where you can wander off the course if you're not careful. To help avert that, there are MANY brave volunteers at this race, with a lot of them guiding the runners.

One thing that added to my confidence this year was that I was going into the race knowing what the cutoffs really were. (Last year they were adjusted out mid-race. I'm sadly not a guy that easily adapts to change - knowing the real cutoffs from the start was a big deal to me.) 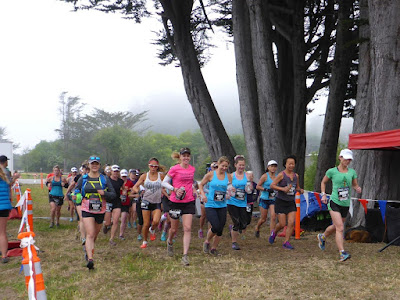 A unique thing about this race are the wave starts. Based on your age and your knack for using a toilet seat, you got held back a bit. The race starts at 8 AM, but only for women over 80. There are 22 waves, and my advanced age put me in wave 15, with an 8:41 start time. (The youngest runners started at 9:01.) Note that you can start with a later wave, but you cannot start with an earlier wave.

There was also an option to start at 7 AM with the early start, but those runners do not get an official time, although they are official finishers with medals and such. I considered taking advantage of that, which would pretty much take the cutoffs out of the equation, but I really do get a kick out of the wave starts, so I decided to take the risk and stick with my assigned wave. 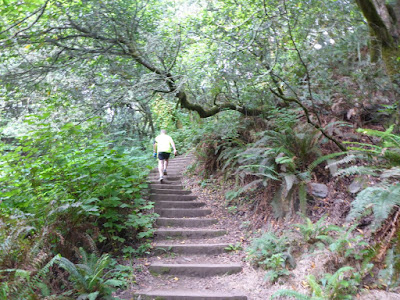 When you think of "Dipsea," you usually think of stairs. This trail is infested with them. Some of the stairs are more useful than others. These early ones were pretty good, especially at getting the heart rate up and going. 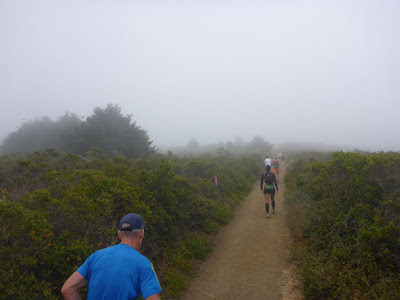 The Dipsea trail is known for jaw-dropping views. For this race though, we had a thick marine layer at the start which meant we didn't have to worry about being distracted by a view. It also meant it was wonderfully cool. 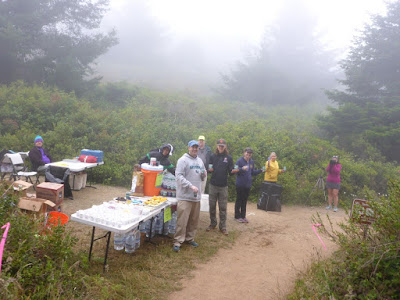 The first aid station is on the top of Insult Hill. That name makes a lot more sense when you are coming the other direction, which we would be doing much later. 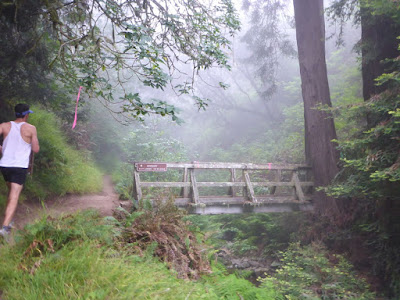 After coming down Insult, you enter a rain forrest that is so lush it's really hard to believe we're in the middle of a severe drought. 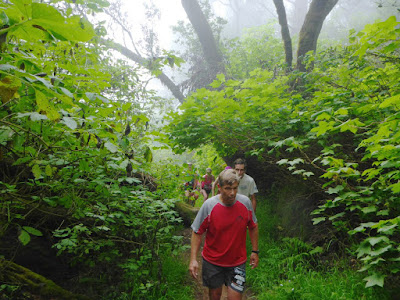 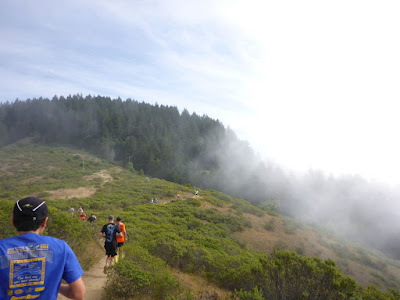 As we neared the top of that first big climb and the Cardiac aid station, we were above the marine layer and got a bit of sun.

When you leave Cardiac, you start down a treacherous bit of trail that often takes runners out - they are so excited to get a bit of downhill that it's easy to go too fast and trip.

This downhill eventually becomes much more run-able after that initial bit of trail. 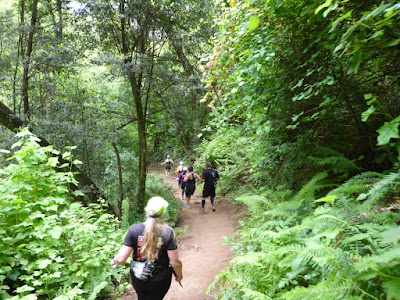 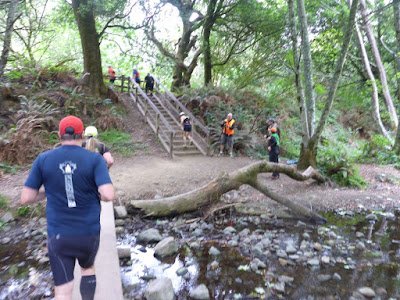 The downhill bottoms out at the entrance to Muir Woods with this creek crossing. If you look closely, you can see Nosaj (not his real name, in orange) taking pictures of us as we come through.

As we started up the hill out of Muir Woods, we started seeing more returning runners. Often the trail was wide enough, but there were a number of places where it was too narrow for runners to comfortably pass, which made this a real test at times.

As we got closer to the town of Mill Valley, we started having more road crossings. All of them had volunteers to stop the cars for us. 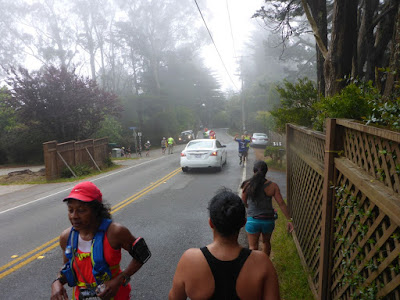 Once you get to the top of the hill, you are pretty much in the town, so things start to get interesting. 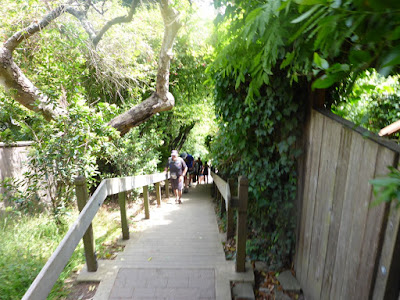 And then you hit the infamous Dipsea staircase. 688 steps. Fortunately, they are broken into several flights to give you some breaks. 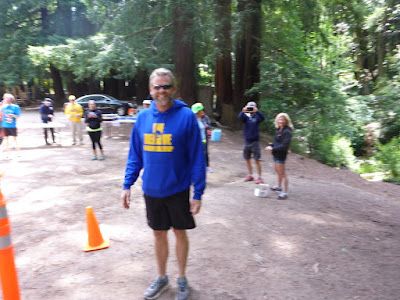 Eventually you get down all those steps and reach the turnaround aid station. This is also the first cutoff (11:25) - I showed up at 10:52 in great shape.

After refilling my water bottles, I headed back up those stairs. 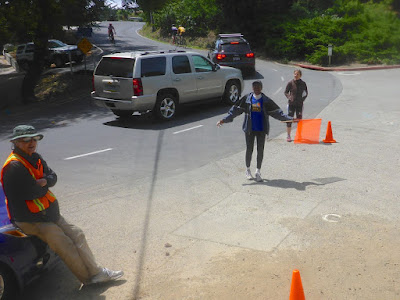 Eventually, if you stick with it, you make it to the top of the stairs and that hill. It's an awesome feeling to get a bit of downhill for a bit. 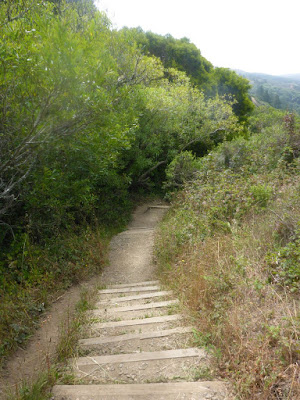 As I was going down that hill, I met the sweepers coming up it, which meant they were well behind me. That was a good thing. Even better, it meant there would be no more two-way traffic (at least with runners). 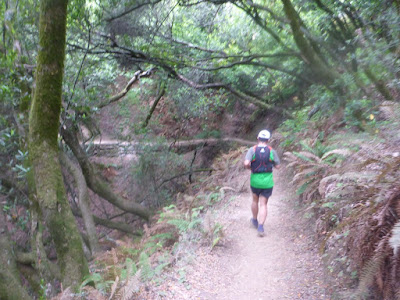 We had the trail to ourselves. 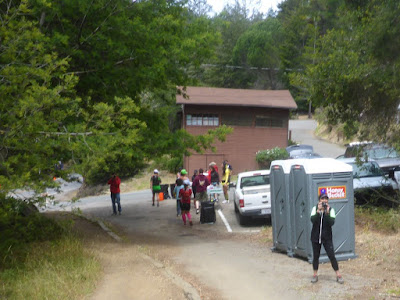 Coming out of that aid station though is a long, often tough climb back up to Cardiac. This is the stretch that ate my lunch last year. 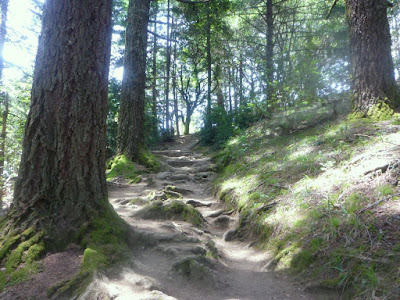 Eventually you get back to that gnarly bit of trail that means the climb is nearly done. Cardiac aid station it near! 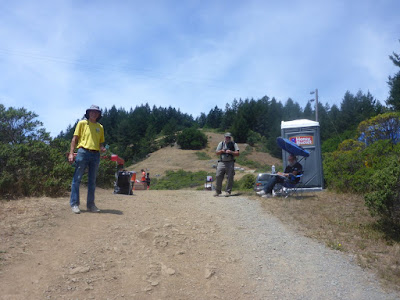 And just like that, it's here! This is the third cutoff (1:00). I got here at 12:37. Last year, this was the aid station that did me in - I missed that cutoff and was pretty trashed. This year I made the cutoff and was feeling OK. It was a really warm climb, so I took some time to cool off, and then practically skipped out of there.

There is still Insult Hill, but other than that, the climbing is all done. 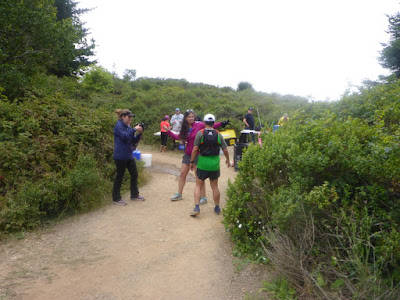 The last aid station, and the last cutoff (1:40). I got here at 1:13. I'm home free. Finally. It is one mile to the finish and it's on mostly gentle downhill. Unbelievably, I still had some legs, so I started moving fairly fast, all things considered. 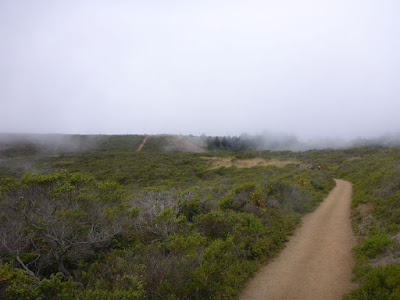 A huge thing was that, as we got lower, we got back into the protection of the marine layer. It felt SO GOOD to hit this cool breeze. 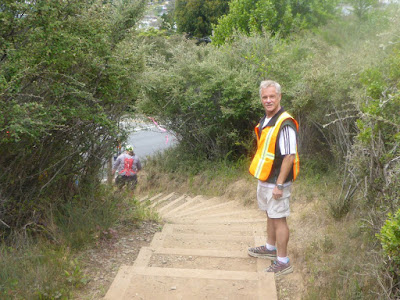 A few more steps, a road crossing, and this gets real.

I completely forgot to take any pictures as I approached the finish. I threw my soaking wet hat much higher than I would have thought possible (thankfully it didn't land on anyone) and let out a yell.

I cannot describe the feeling I felt as I came in. This was easily in the top three finishes for me. 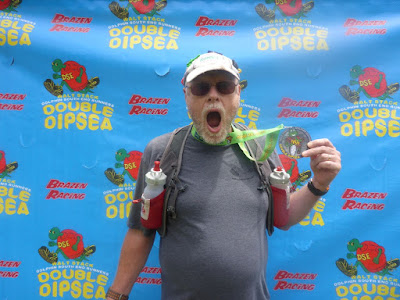 This is a special race with a unique format. It's hard, with tough trails and all those steps, but it's also beautiful and often fun.

One of the things that adds to the challenge of this race is that, until you get back to the Muir Woods aid station, you are dealing a lot with other runners. In my case, all the fast runners that I started ahead of have to pass me, then pass me again on their way back.

One thought I had was that, if I was a bit faster, I could wait and start with the last wave. That way I wouldn't have to deal with any runners trying to pass me and would only have the runners coming back at me. (I believe my finish time would also be penalized, but that would be fine - my concern would be the cutoffs. In this race, Muir Woods and Cardiac would have been really close if I had waited.)

And finally, a HUGE thanks to the MANY volunteers from both Brazen Racing and the Dolphin South End Runners that made this all possible - you all were rock stars!

And that's about it.

PS: You can see more of my pictures here.
Posted by notthatlucas at 5:29 PM 3 comments: