I'd heard of the Ruth Anderson Memorial Endurance Run, but all I knew for sure was that it was flat and paved. And loopy - you had to run multiple times around a lake.

It turns out, I really didn't know that much about the race. It's not flat, although the hills are very mild (my 50K ended up with just under 900 feet of climbing). If you like pavement, you could be on it for about 99% of the course. If you don't like pavement, you can be on dirt for about 95% of the course. If you don't like loops, well, that could be an issue, although since each loop is somewhere around 4.5 miles, and each loop has a wide variety of scenery and normal(ish) people sharing the trail, it really doesn't feel as loopy as you might think it would.

After my experience at the Riverbank One Day, running loops around a high school track for six hours, I figured this would be a good next step in testing my recovery. So I signed up.

An interesting thing about this race is that, although it has three distances (50K, 50M, and 100K), you just sign up for the race - you don't specify a distance. You get to pick your distance live, as you are running the race. When you get to the 50K finish, you get to decide whether you are done or want to go on for the 50M distance. When you get to the 50M finish, you get to decide whether to go on to the 100K. The trick is that, if you decide to go for a longer distance, you better make it, or you get credit for a DNF. (Another peculiar thing that can happen is if you lose track of how many laps you've done and overshoot your goal distance - you are now going for the longer distance.)

In any case, I knew that a 50K was all I had in me, and that was being a bit optimistic. I'm pretty well trained for a 10K, and could survive a Half Marathon pretty well, but a 50K? I haven't gone an ultra distance since the Brazen Dirty Dozen last July. Even so, I went into this race hoping for a 50K PR. Granted, that's not saying much since my PR was 8:24 at Way Too Cool a couple of years ago. But I figured if I had a good day, a 7:30 time at Ruth Anderson was possible. (Spoiler alert: Ha ha ha.)

The distances at this race are all certified, which leads to some complications. Such as a start that's a half mile from the main race area (making the first loop a bit shorter than the others). And for the 50K, you go through the main race area and hit the actual finish line a quarter of a mile into the next loop. 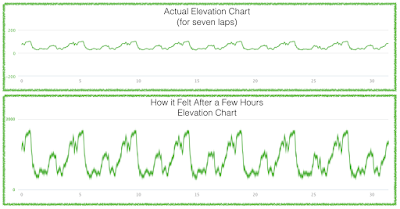 The loop is pretty much flat, but as the day wore on, the hills grew. 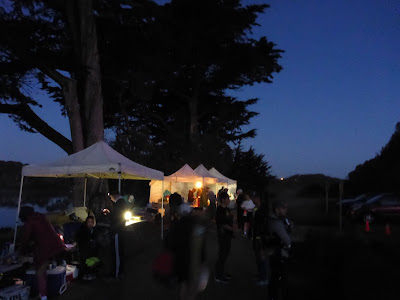 The race started at 6:30 AM, but because we had to hike out a half mile to the start, we had to get there pretty early to get our bibs and set up our stuff. Fortunately, I was smart enough to bring a headlamp for the pre-race porta-pottie visit.

It was starting to get light out as we wandered to the start. It was nice and cool, but there were no clouds in the sky, so there was a promise of a LOT of sun later on. 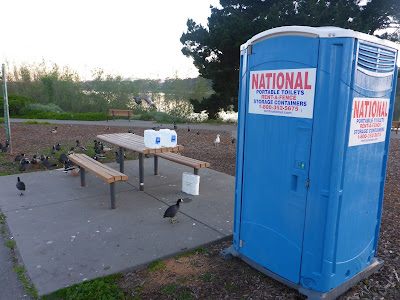 This was the unmanned mid-loop aid station. I figured I'd never really use this, but I figured wrong. That porta-pottie was very handy on the second loop, and the water became useful on the later laps. Some runners would leave bottles here so they wouldn't have to carry them for a whole lap. It was awesome that nobody seemed to mess with the stuff here - we were in a very urban area with a lot of people wandering around that were not part of the race. That the toilet paper survived the whole day was very cool! 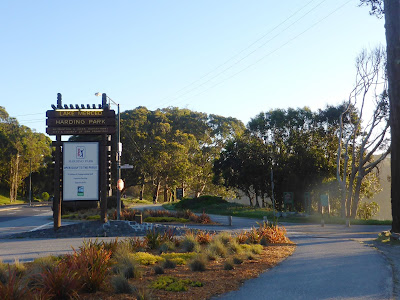 The TPC Harding Park Golf Course clubhouse was inside the loop. While we never had to cross any roads, we did have to cross their driveway, and it was often pretty busy. But the golfers were very accommodating and almost never tried to run us over. Even more amazing, they somehow managed not to laugh out loud as they saw me "running" by. 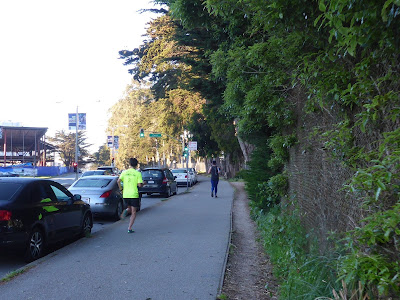 One interesting thing about loop races is that, eventually, the faster runners will pass you. I had hopes of getting at least two laps in before getting passed. HA! Chikara blew past me shortly after I headed out on my second lap - he was on his third, and was running about twice as fast as I was. 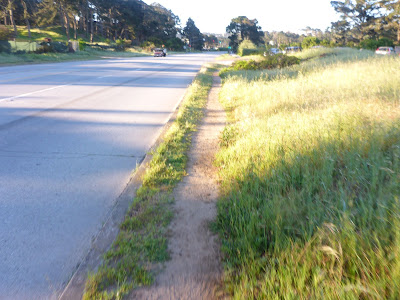 There was one short stretch of single-track. It's a little hard to tell, but it was also slightly downhill.

The course was in a very urban area of San Francisco - there was almost always a road just off to our left, and the trails we were on were very popular for the normal people that live around there. But crowding was never an issue. The dirt path along right side of the trail was a blessing. There were a few places where the shrubbery had overgrown the dirt trail, and even a few places where that shrubbery included poison oak, but mostly it was like this and very runnable. 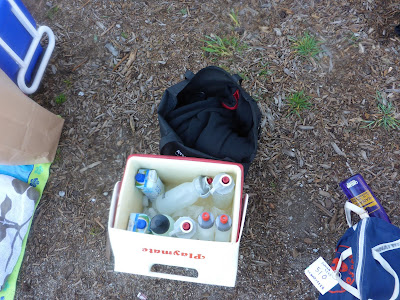 My goal was to bring enough pre-made bottles of Tailwind that I could just swap out my bottle at the end of each lap, and that worked out pretty well. As it got warmer, I did end up supplementing the Tailwind with water at the mid-loop aid station, but the Tailwind worked well and kept me going with no stomach issues. 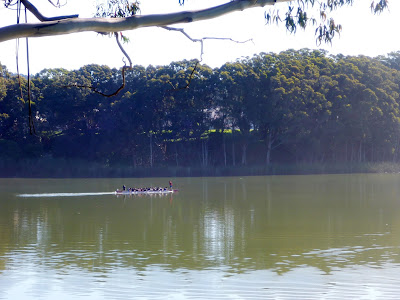 Later in the day, crewing teams showed up on the lake, and it was fun listening to them yell out the strokes. 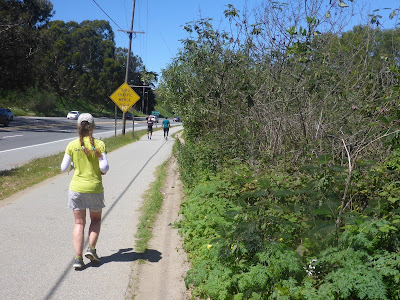 There are several fun things about the above picture. First, this is my last lap, and there is only about two more miles to go for me. Second, that's Kelly blowing past me on her way to winning the 50M. She was very steady and determined - so impressive! Third, see that guy in the teal shirt just ahead of her? He turned out to be in the 50K race as well. I ended up passing him and beating him by a bit over two minutes. But he ended up getting second in his age group (20-29), and a nice plaque. But I took solace knowing that I beat a guy 30 years younger than me! (And I was solidly beaten by a guy 23 years older than me - 81-year-old Bill was amazing out there! I love how he makes the 69-year-old Jim and 64-year-old Eric look like kids!)

And this is it - my finish line, a quarter mile into the eighth lap. The Race Official didn't even have to ask whether I intended to go on to the 50M race since I was obviously totally wiped out. But now I had a quarter mile hike back to the race headquarters area.

My sixth lap was by far my hardest and least fun. I really struggled, and as I came in to the race area at the end of the lap, my intention was to stop and rest for a few minutes. Maybe a lot of few minutes. But as I went past these guys, who had all already finished their 50Ks, they started yelling encouragement at me, and it really pumped me up! I ended up doing a quick bottle exchange and headed back out immediately. My seventh lap turned out to be pretty good and significantly faster than the sixth. (And I feel confident that, if I had paused, a DNF would have been in my future.)

As I mentioned earlier, each lap was about 4.5 miles.


My official finishing time was 7:50:07. A pretty big PR, but not as good as I had hoped for. Based on how close I had come to all but giving up in this race, however, I was thrilled with the time.


A question you should be wondering about is who is Ruth Anderson and why is this race named after her. I know I was. If you do an internet search on "Ruth Anderson runner" you get a lot of hits. She was an amazing local runner that started running relatively late, and dominated ultra races while in her 40s and 50s. I'm sad I never met her, but thrilled that I got to run in the 30th edition of the race that carries her name. 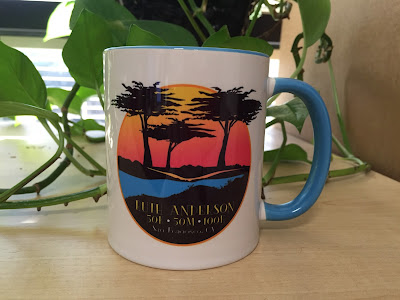 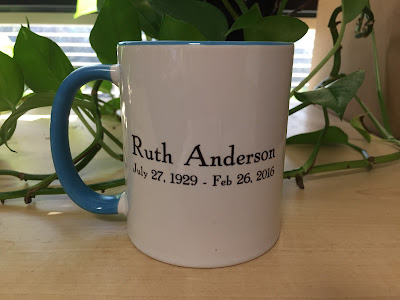 A huge thanks to everyone involved in putting on this race - it was a lot of fun and a running memory that won't soon be forgotten.

PS: You can see most of my pictures here.
Posted by notthatlucas at 4:09 PM 1 comment: