The Brazen Diablo Challenge has had quite a past, with the weather determined to keep things interesting. Something went wrong this year though, and unusually nice weather led to lots of records falling and lots of fun.

I had originally signed up for the 10K back when I wasn't sure how my heel would be feeling, but come race time, I upgraded to the Half. This meant that I would get a chance to throw down with Mrs Notthat.

Having this race in late spring usually guarantees a lot of fun creek crossings. This year there were only a few small token crossings.

At mile 1.1 we hit the first aid station. It was nicely loud! 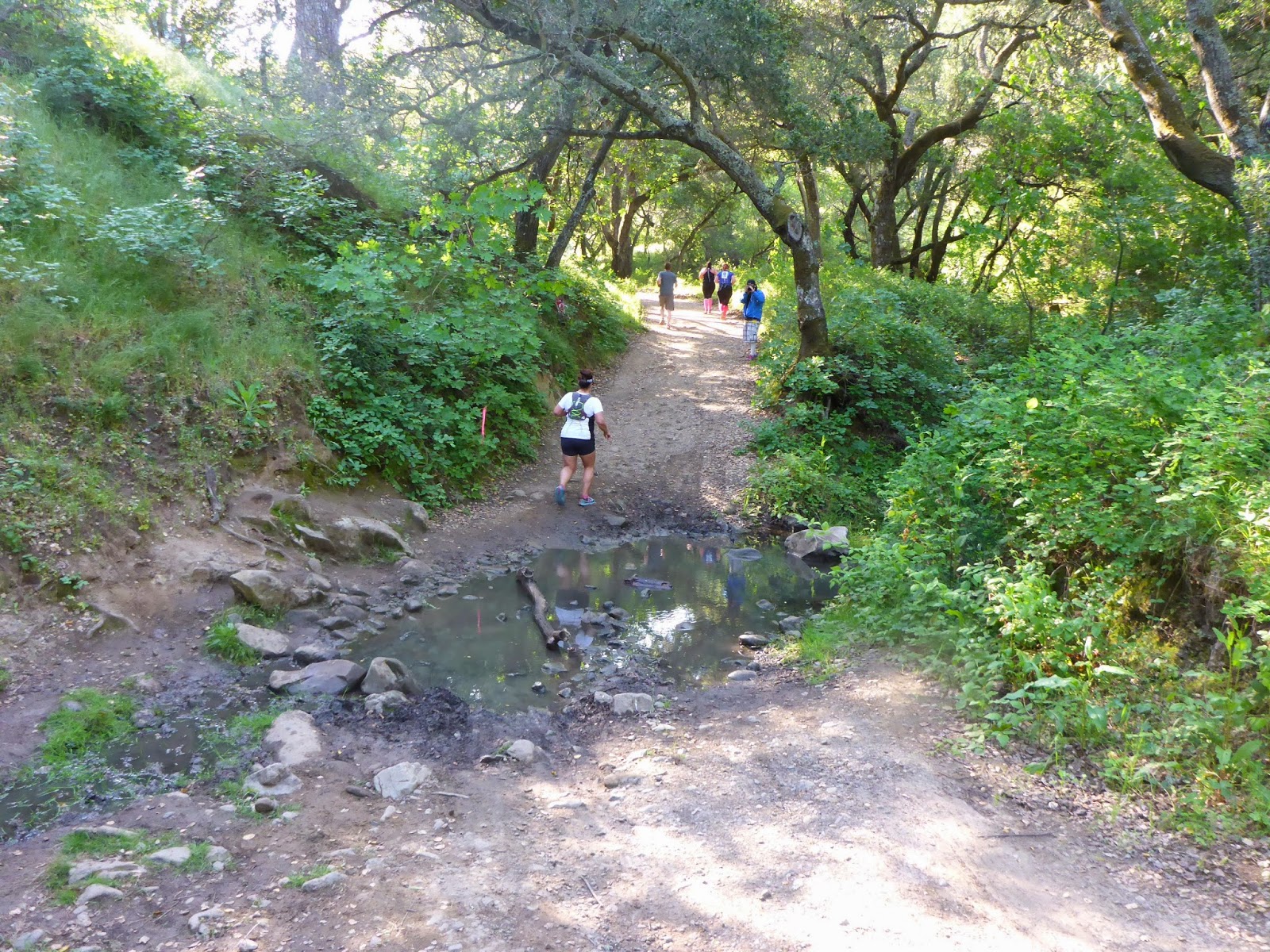 And then finally, a creek crossing with a little bit of water. If you look really hard, you can see volunteer paparazzi Leahcim (not his real name) who picked a great spot to take a bunch of pictures (all runners had to navigate this raging torrent). Here are the pictures he took of Mrs Notthat and I crossing: 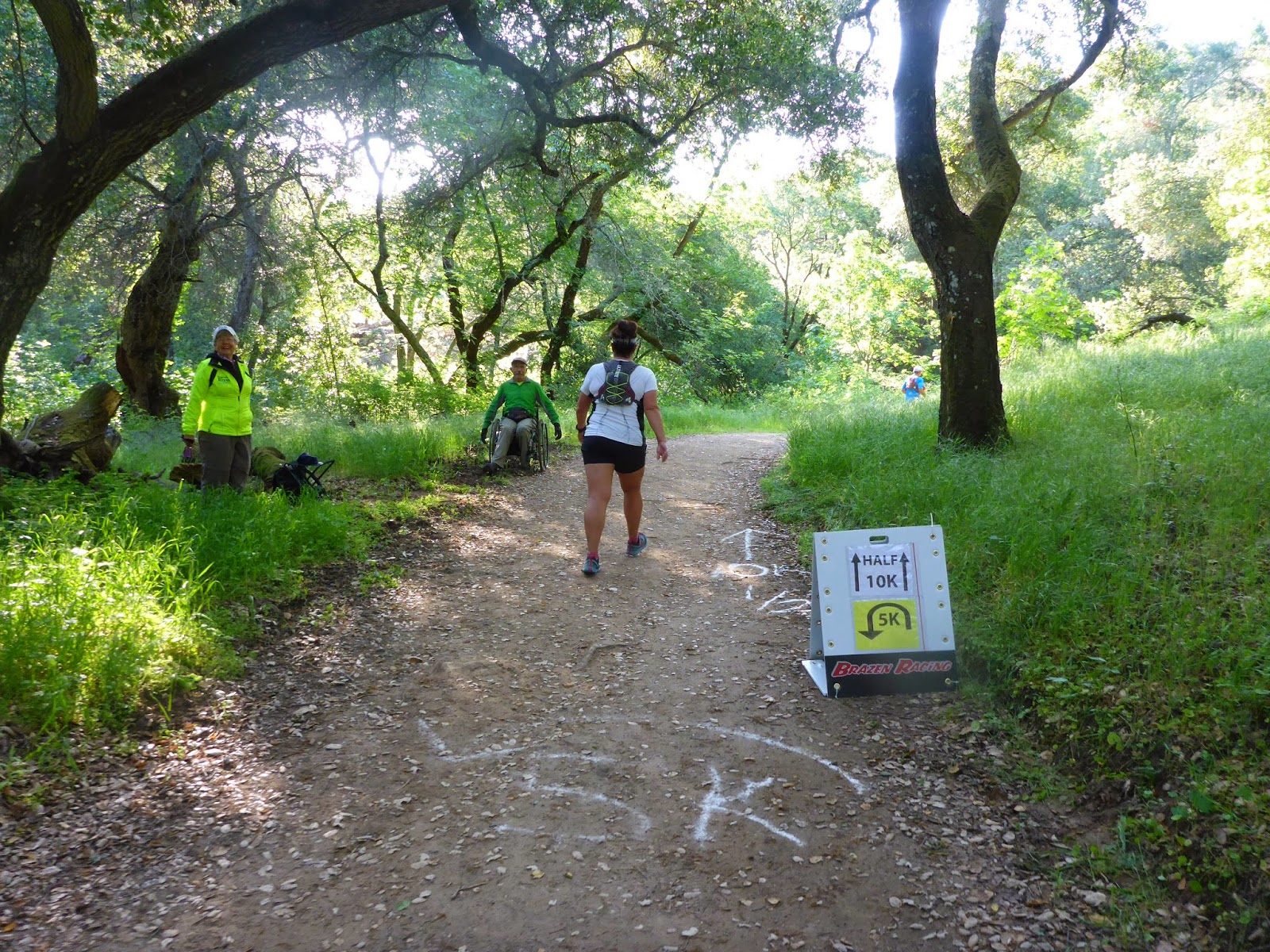 A little bit after bravely surviving that river crossing, we made it to the 5K turnaround where Bob (not his - oh wait, that really is his real name; my secret code has met its match!) and another volunteer were busy cheering the runners on.

Not long after the 5K turnaround, we took a left onto some of my favorite trail on this course, even if it is largely uphill. 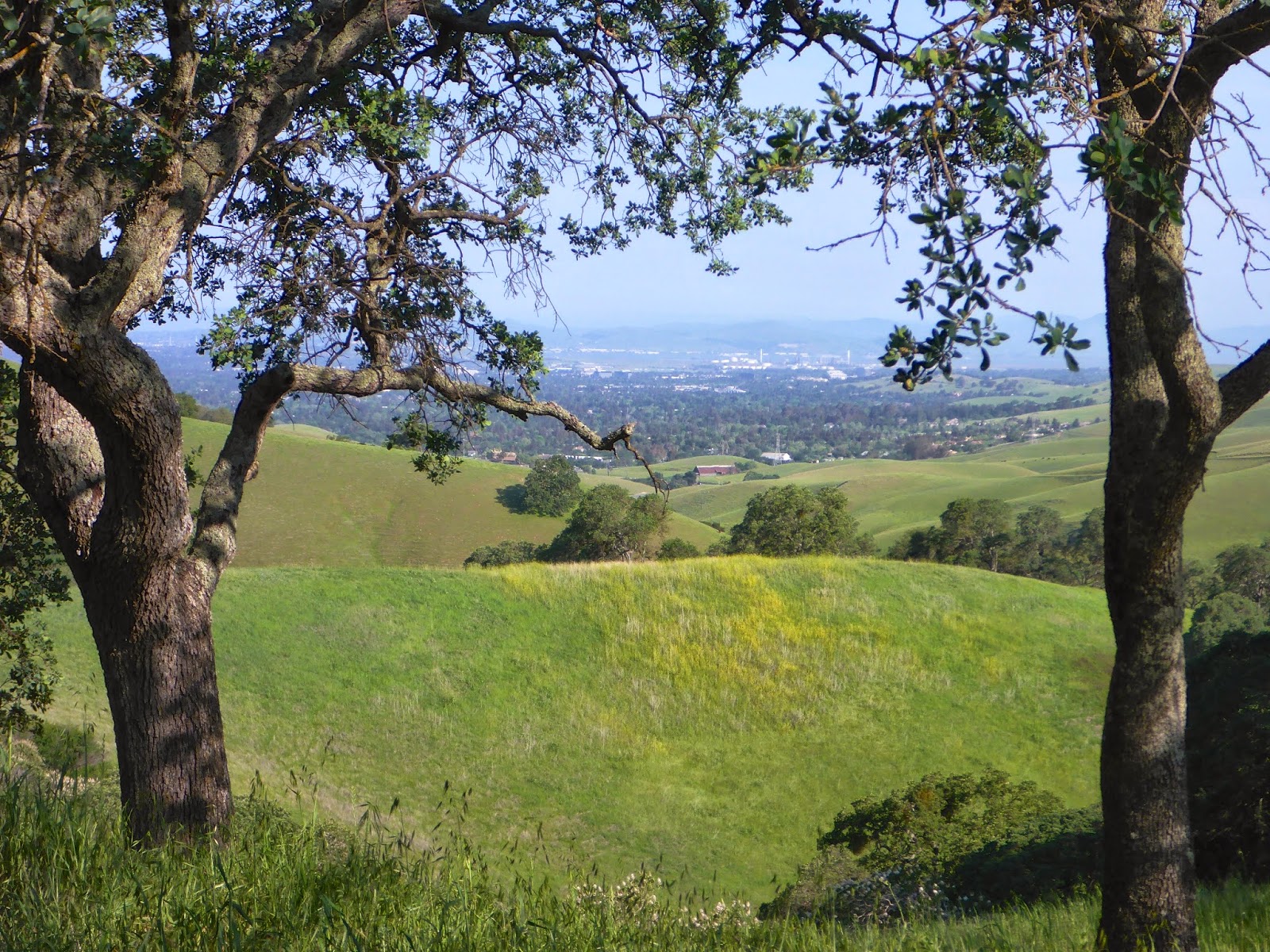 One thing about climbing the hills on this course - you are almost always rewarded with a great view, which is nice to look at while you are trying to catch your breath. 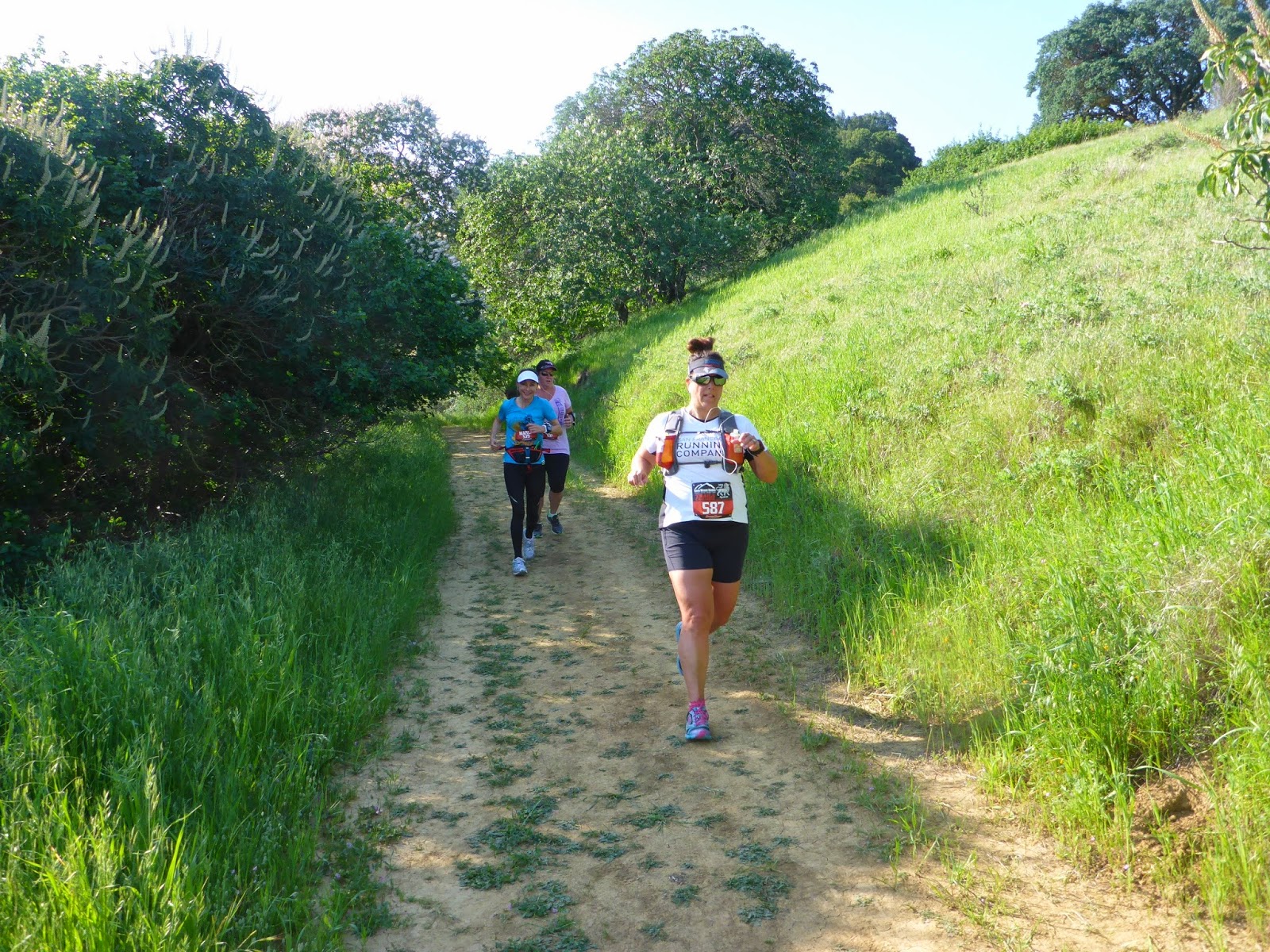 As a complete stunner, I was able to pass Irual and Alram (not her real name) on the way down that first hill. It was really early in the race, and I knew this wouldn't last, but I had to take a celebratory picture anyway. And I did not yell "IN YOUR FACE!" (At least not out loud. I think.)

Last year, the lead 10K runner went through here as I was leaving. This year, I saw no 10K runners, which meant that I must be flying! (Umm, no. It meant that the Half runners were given a 30 minute head start this year - last year it was only a 20 minute head start. Still, I didn't know that so in my mind, I had a chance to win this thing!)


At the top of the second hill, the Brazen Rabbit was hanging out. A few hours later, she was on her way to Boston for a little race they have there. 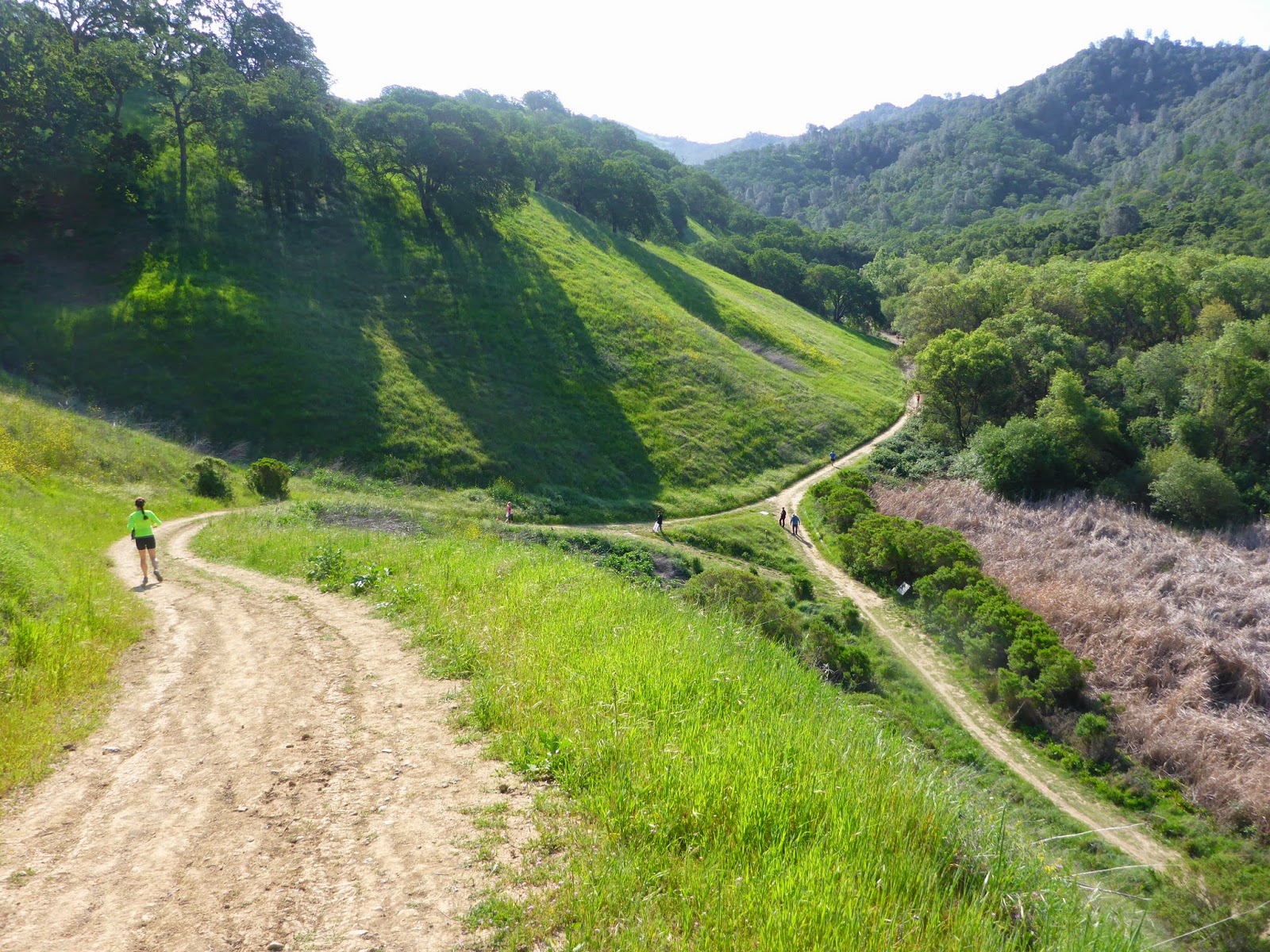 Heading down that second hill I had only been passed by one 10K runner and was hoping to make it to the 10K turnaround (which is just a little bit past where the trail disappears towards the top of the picture) before any others passed me.

I've made it to the bottom of the hill and still have not been passed.

Then I turned around just in time to see Nairb flying (as normal).

In the end I was passed by three 10K runners before I got to this point.

From the 10K turnaround it is a short dash to the Bermuda Triangle of this race, and the start of a very long climb that makes those first two hills seem like speed bumps. 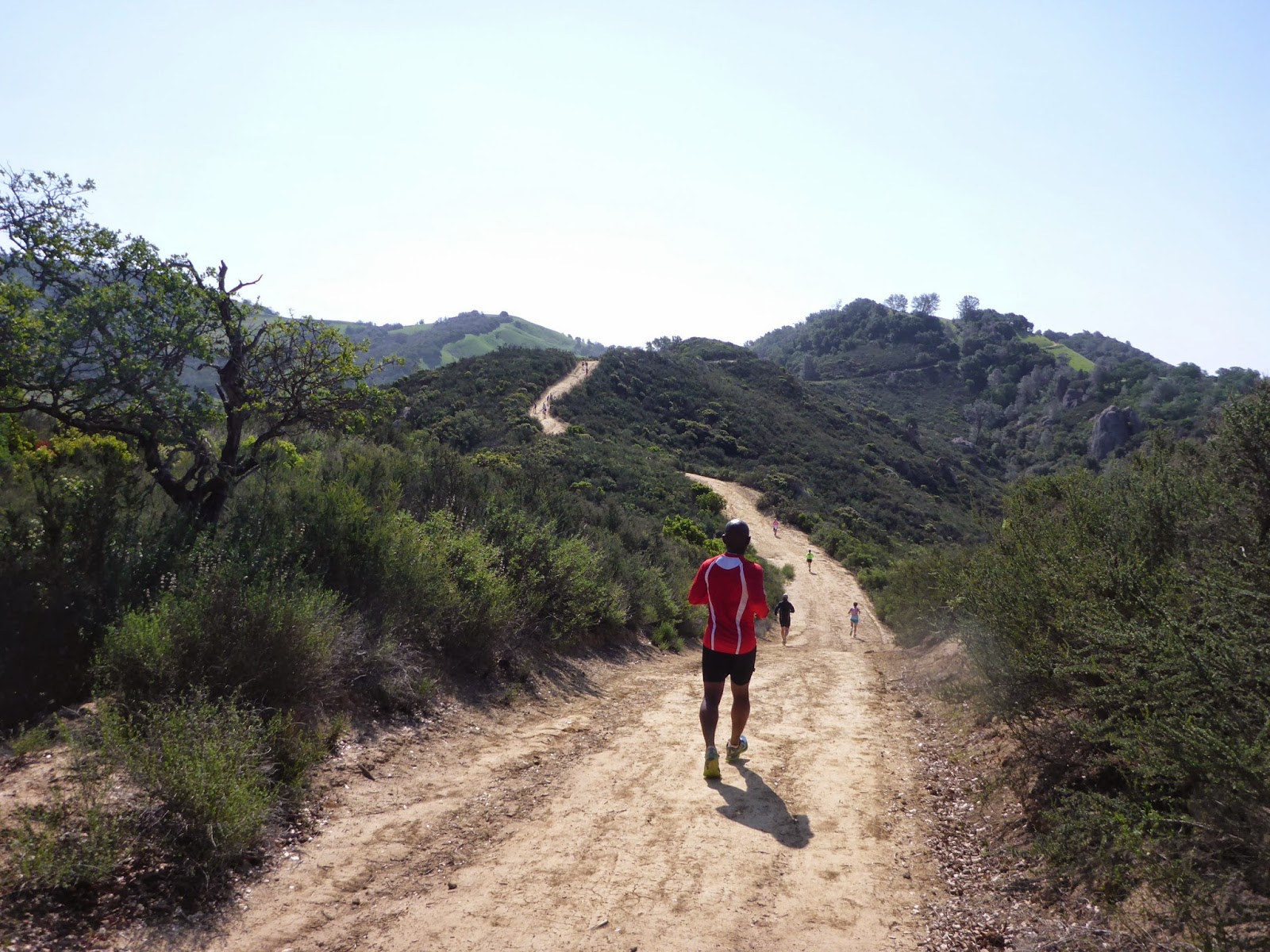 This climb seems to take forever, mostly because it does. It wasn't all that warm out, but being in the sun for so long managed to make things a bit toasty. 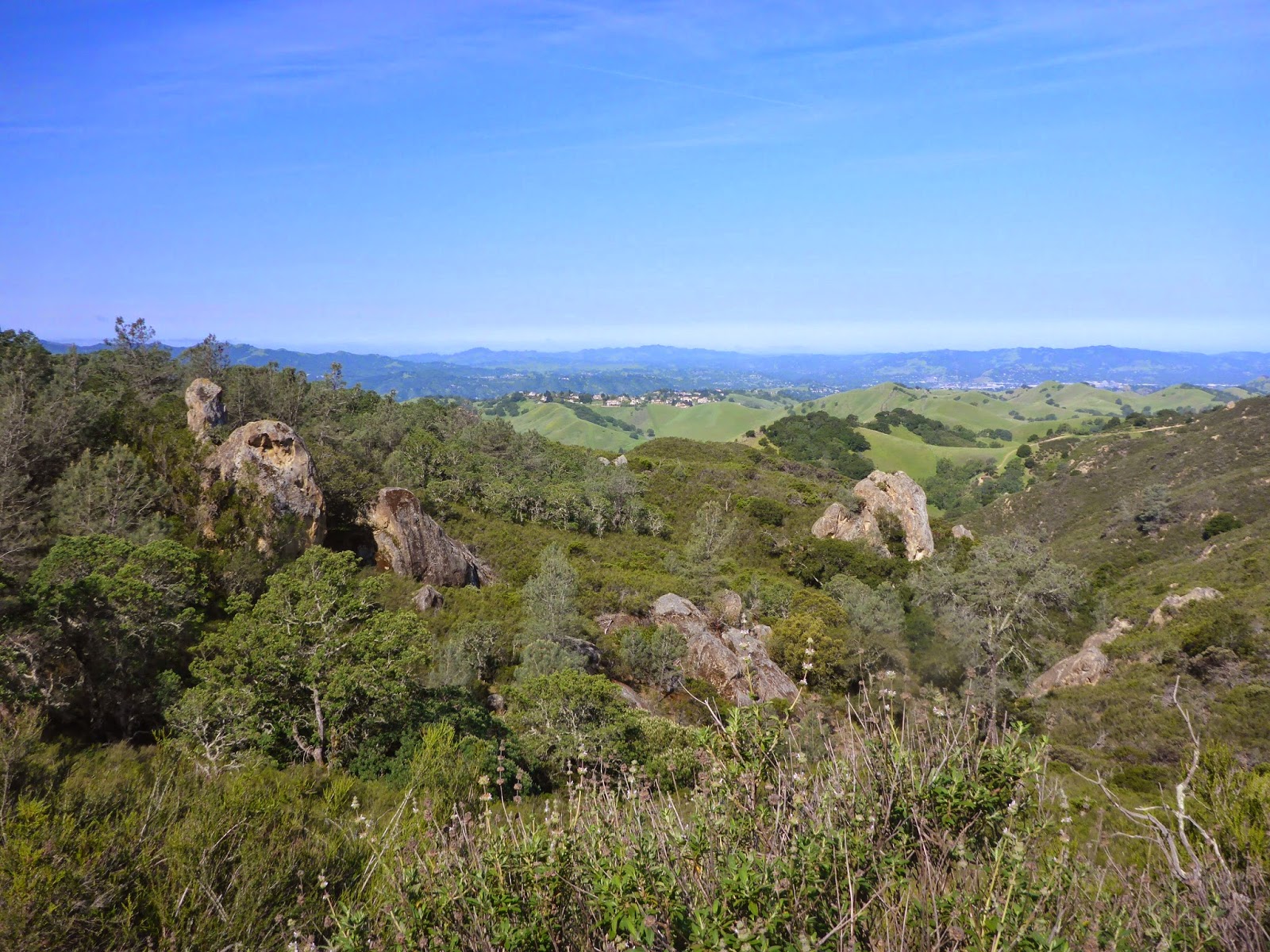 This part of the course is shared with the 50K runners. Since this is about their mile 25 or so, we only see the leaders, which is actually a lot of fun (and very impressive!). 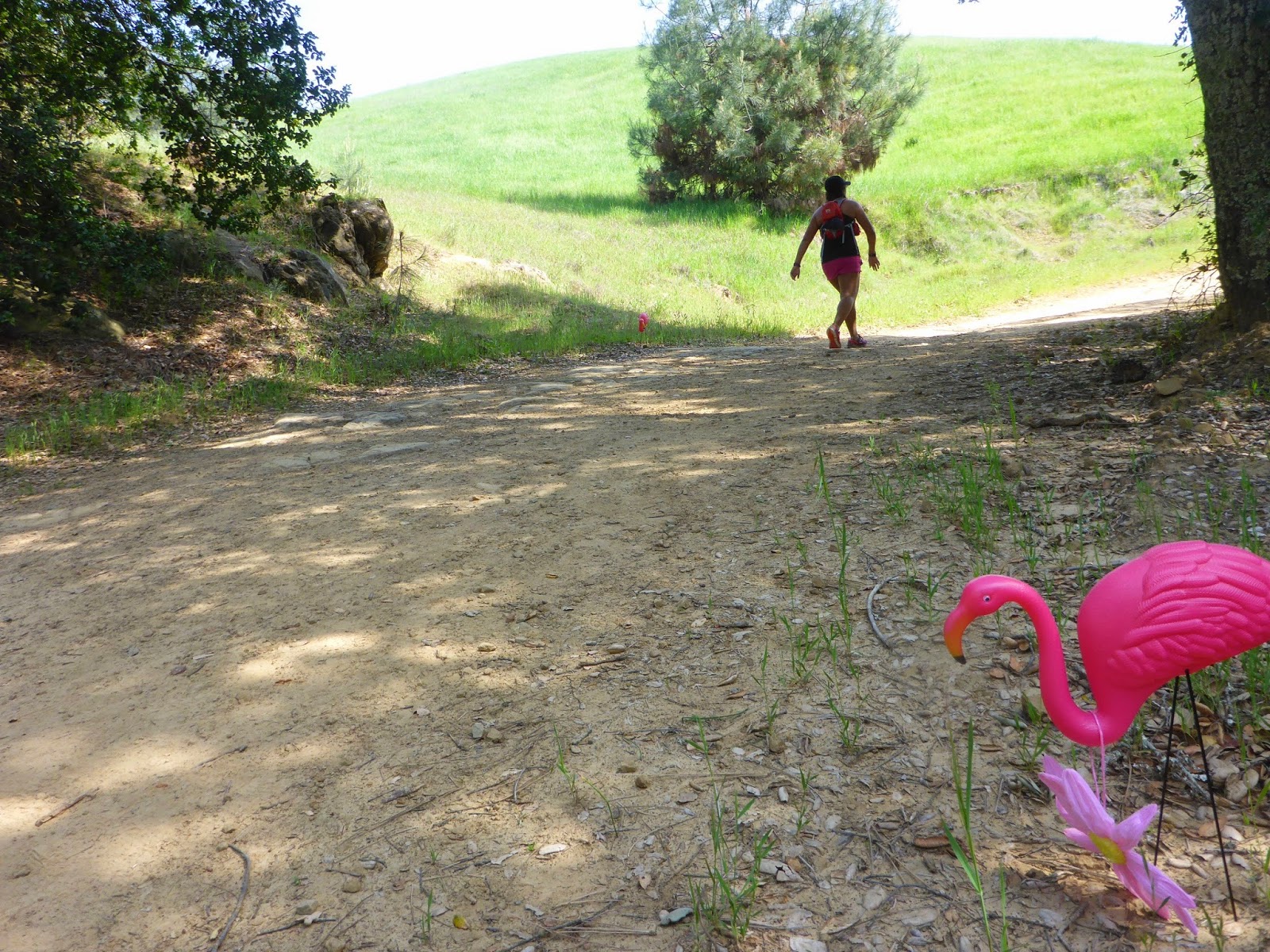 After spending so much time climbing up that hill, it was great to see a pink flamingo, since that meant the aid station was near. (Or maybe she was right and I'm not quite right in the head. I touched the flamingo just to make sure it was real.) 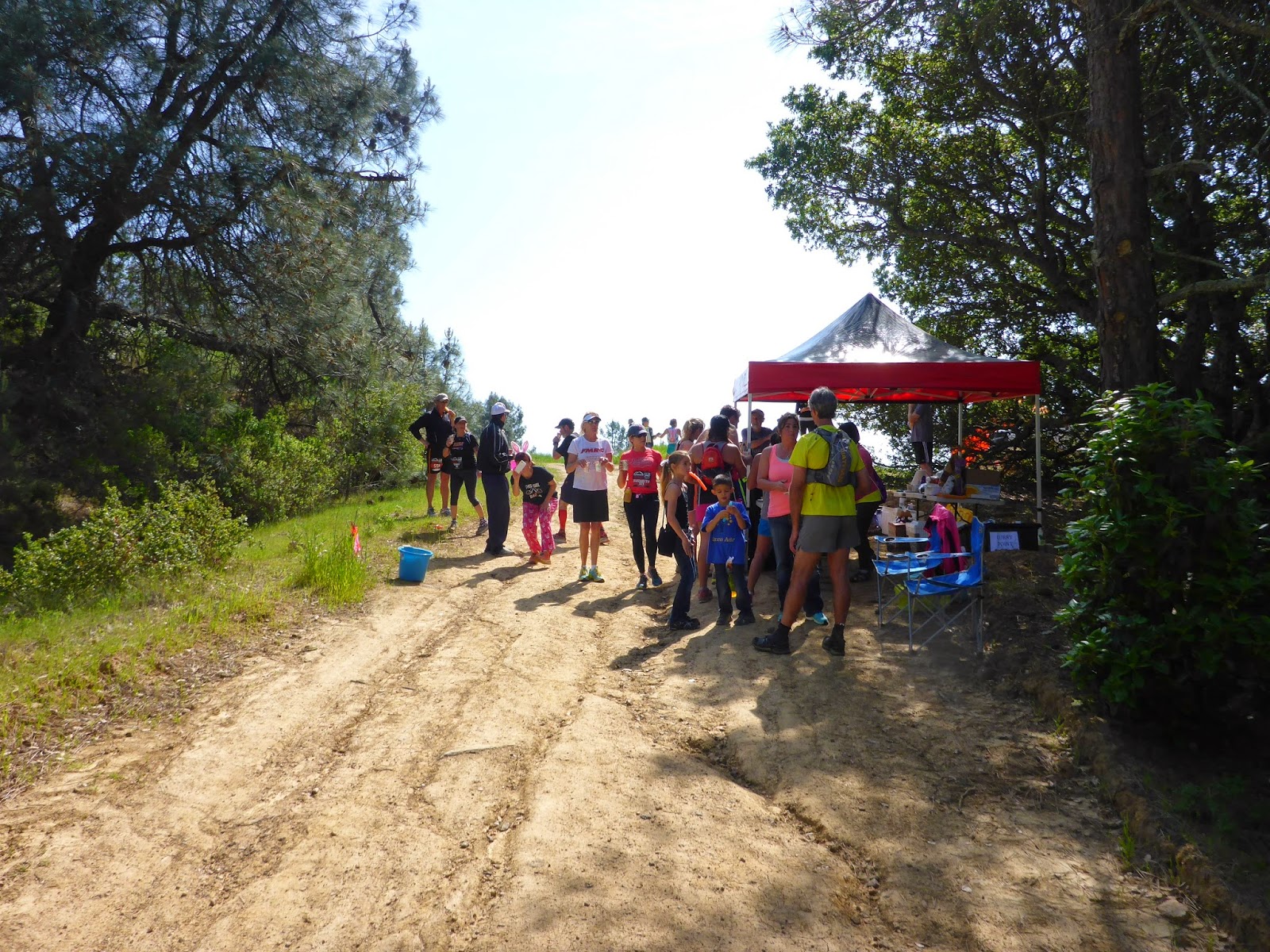 Our third aid station, mile 7.8, where the amazing and delightful Nerak Bacon (not her real name) worked her magic and passed out popsicles. 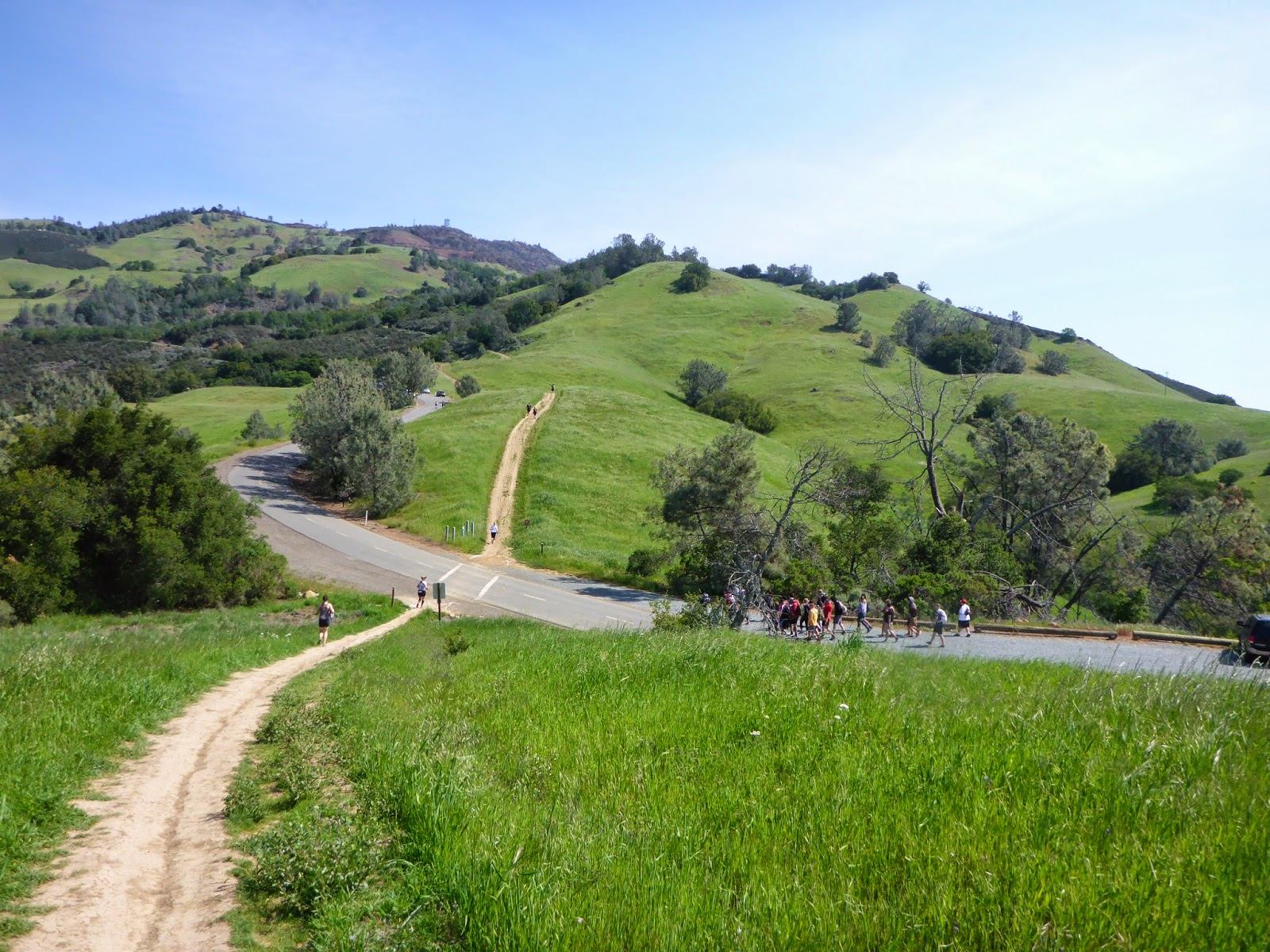 Not long after that aid station, we really are at the top of that long climb and get to begin a long downhill dash (or slog, in my case). This is probably my second favorite part of the course. It's a bit past halfway in the race, but you know all the hard bits are done and your reward is this pretty trail, surrounded by wildflowers, and all downhill. 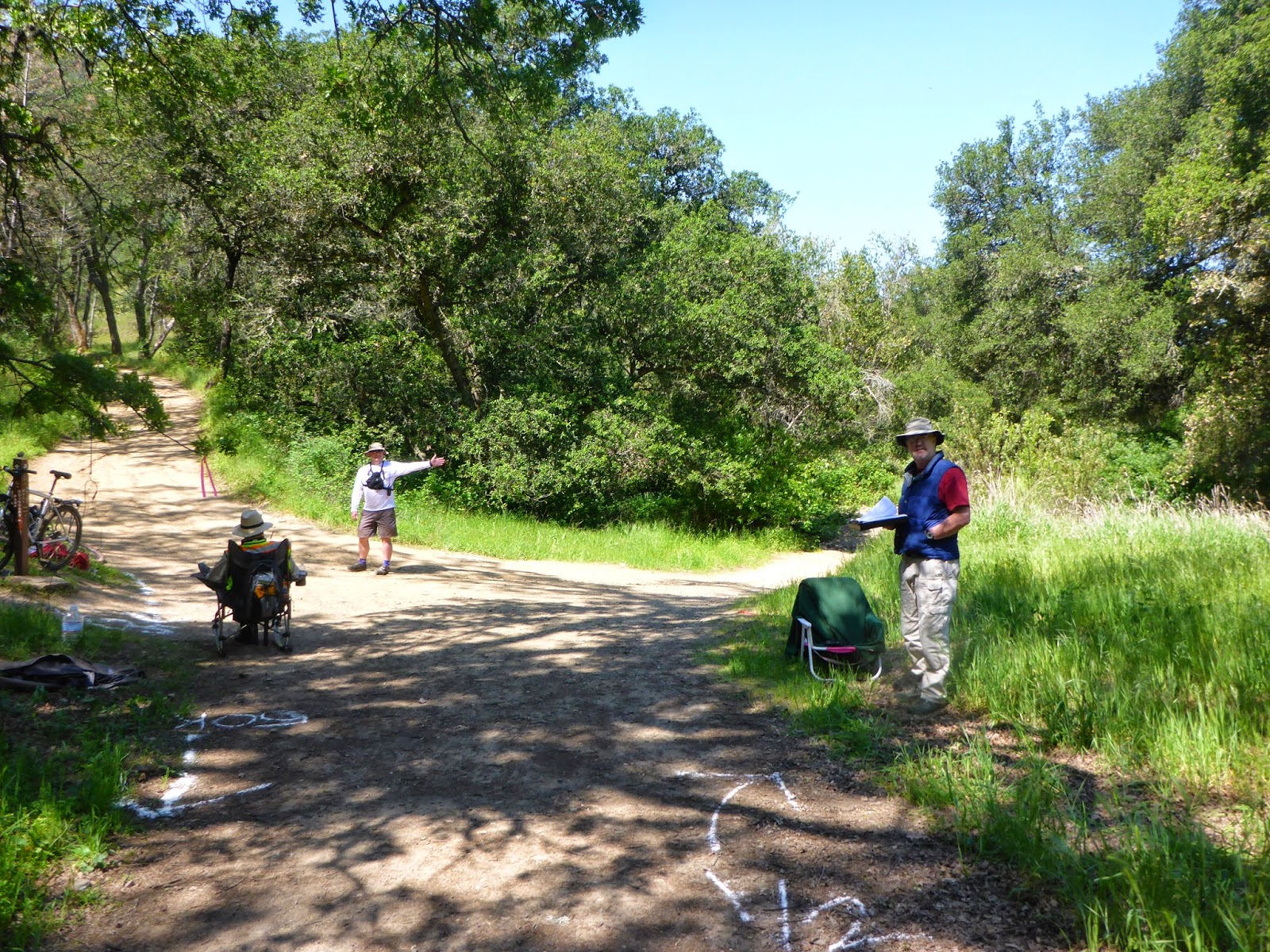 Eventually I made it back to the Bermuda Triangle area. At this point I'm mostly on the same trails I came out on (minus those two small hills, which we thankfully get to bypass). 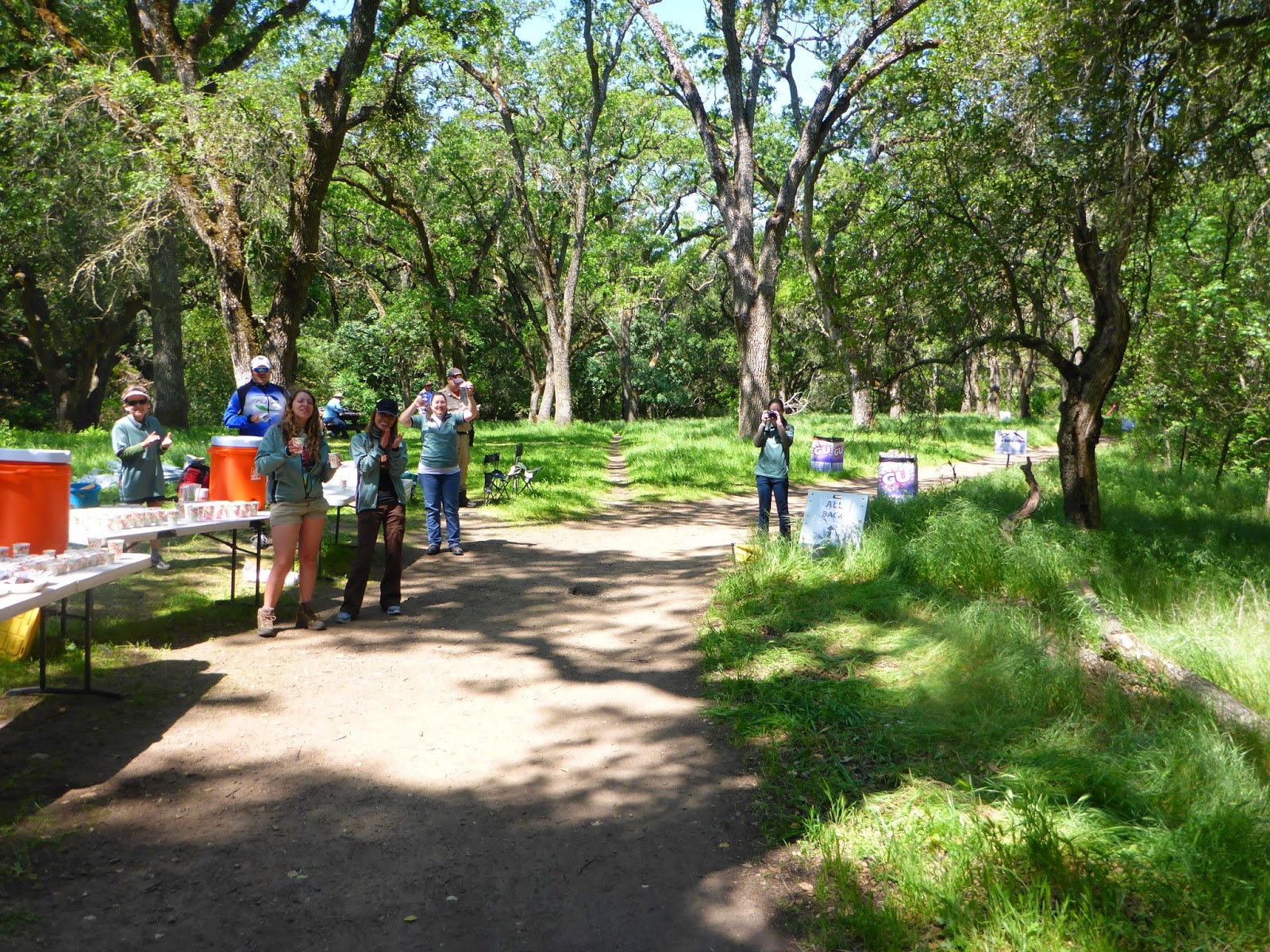 I managed to survive that creek crossing and make it the fourth aid station, mile 12.4 (this was also the first aid station, and was still pretty loud). 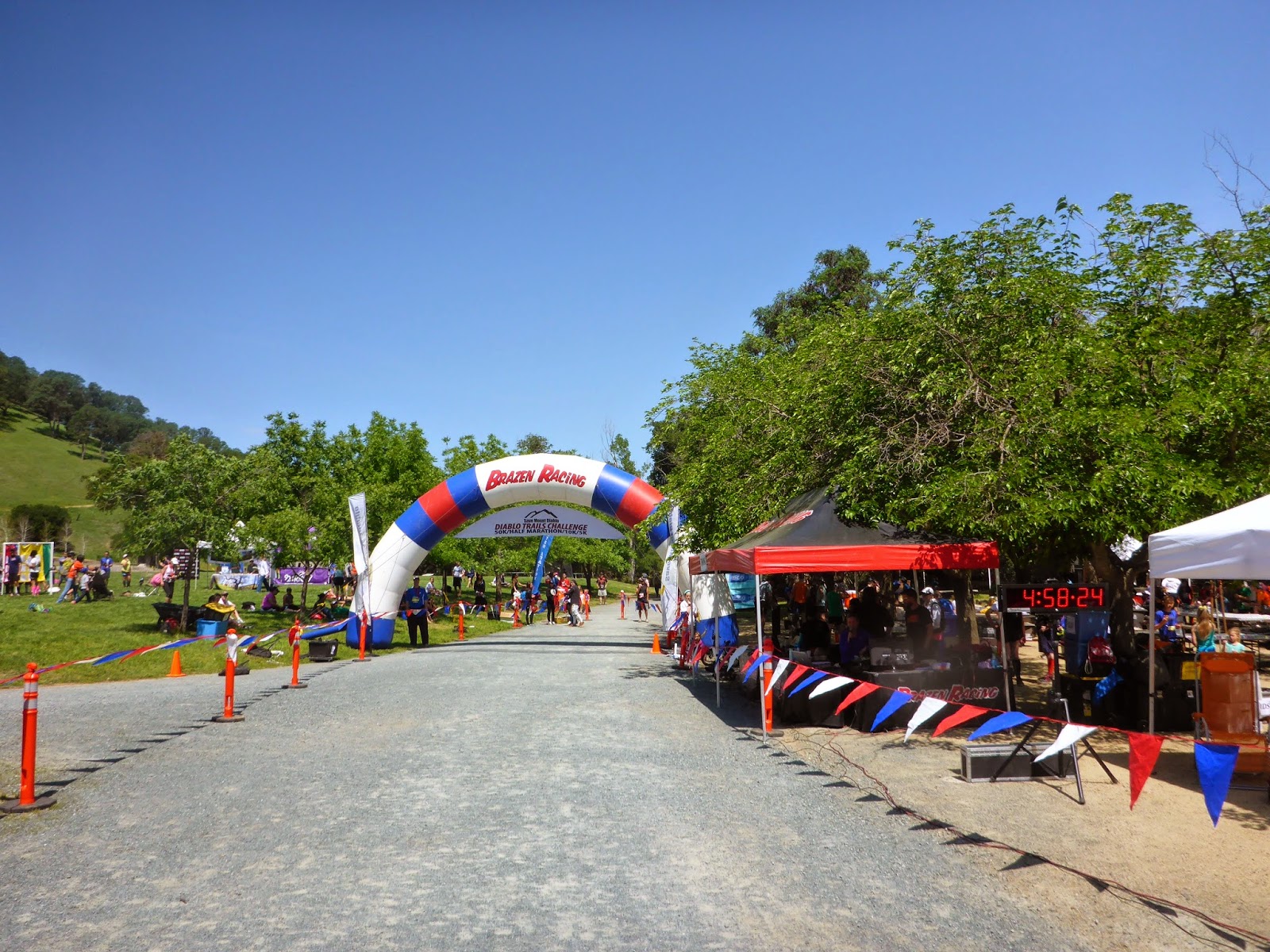 And then there was the finish line. I had not seen Mrs Notthat once after the race started, so she likely handily beat me. (She did, by nearly 20 minutes.) 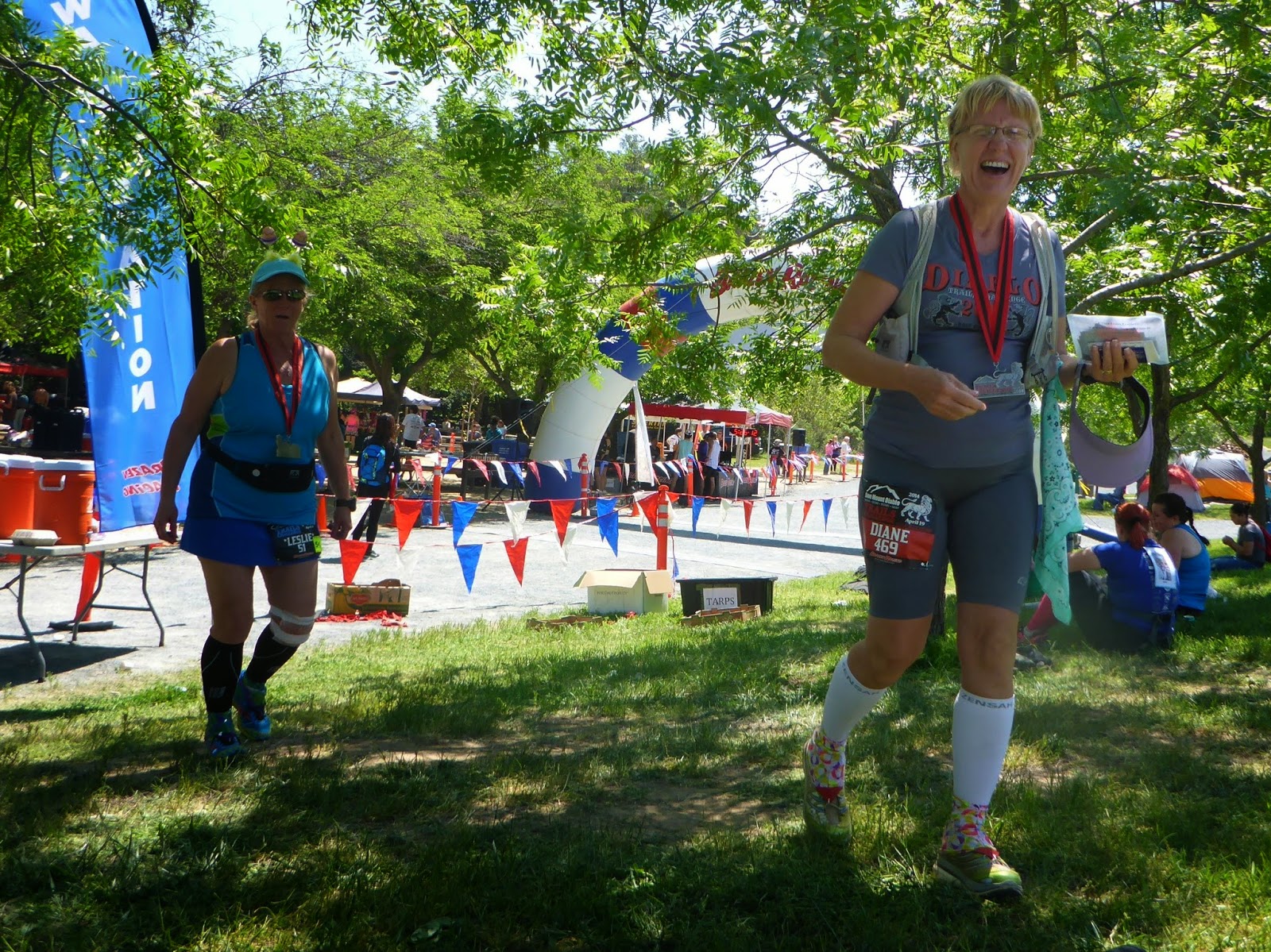 When I first saw Mrs Notthat, she asked if I had a credit card with me. Shopping opportunities at trail races?

What a fun day. As hinted at earlier, lots of course records fell today, including the 50K men's and women's as well as the men's Half, 10K, and 5K. The perfect weather conditions, and possibly the huge reduction in creek crossings seems to have made everyone faster. Both Mrs Notthat and I set course PRs (I beat last year's time by 25 minutes!). 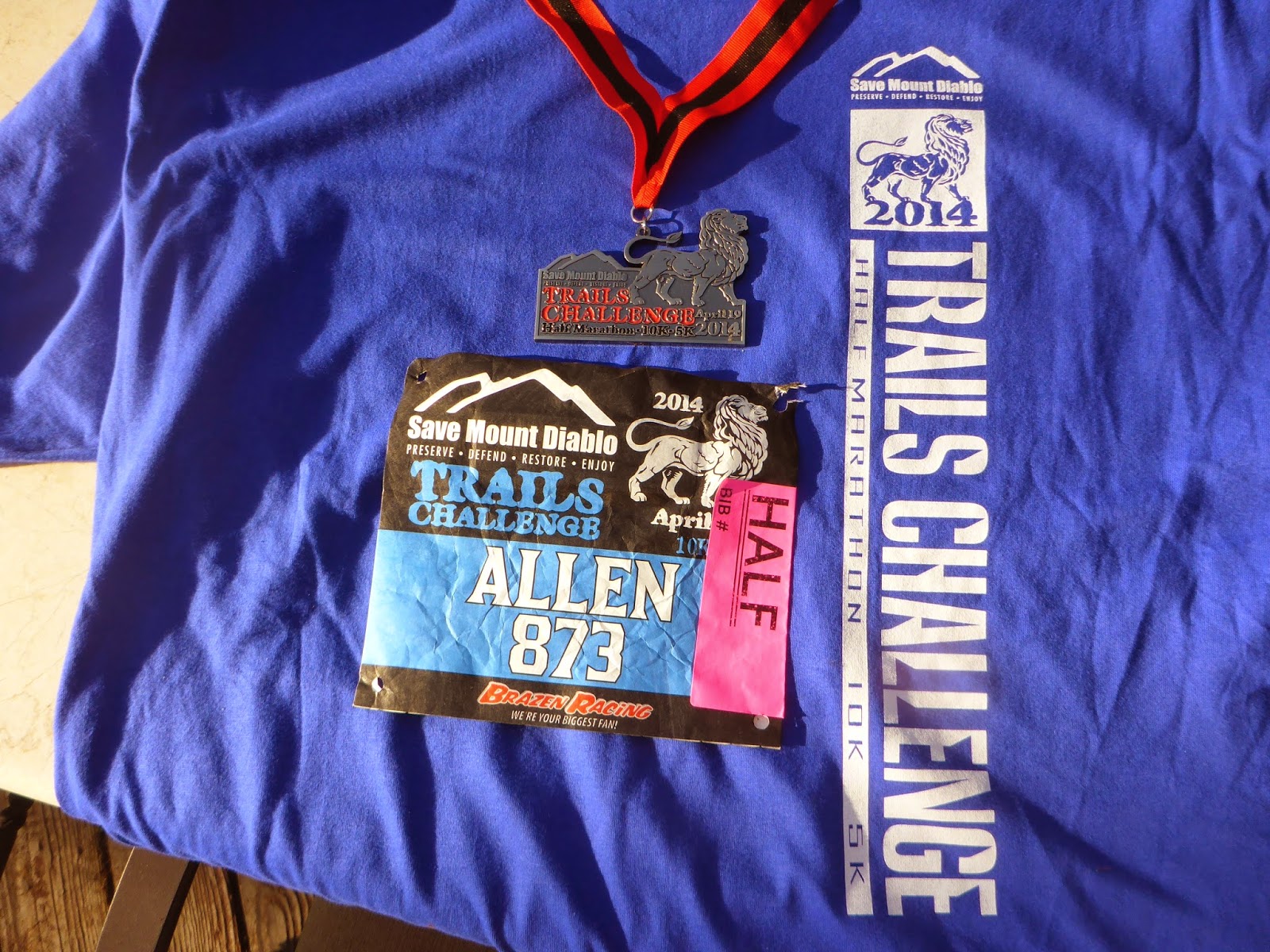 As usual, this race raised a lot of money and awareness for the Save Mt Diablo group, which works to protect, expand, and improve the Mt Diablo open space area.

And, as it turns out, cheer on trail runners like maniacs!

PS: You can see more of my pictures here.
Posted by notthatlucas at 5:11 PM 3 comments:

The Zoom Ayala Cove race is not exactly like your normal trail race. Oh, it has trails, and hills, and even stairs, but it's likely the only race you'll run where you get to help assemble the start/finish area about 20 minutes before the race starts.

And you have to brave the turbulent waters of San Francisco Bay on a ferry to get there.

For a flatlander like me, that boat ride was the scariest bit of the day. A nice side effect though is that, since we are at the mercy of the ferry schedule, the race starts at a reasonable time (10:50 AM). A not so nice side effect is that there is a pretty tight cutoff on the 15M distance since you have to be done before the last ferry departs.

All three loops provide stunning views all the way around the island - it's never dull. 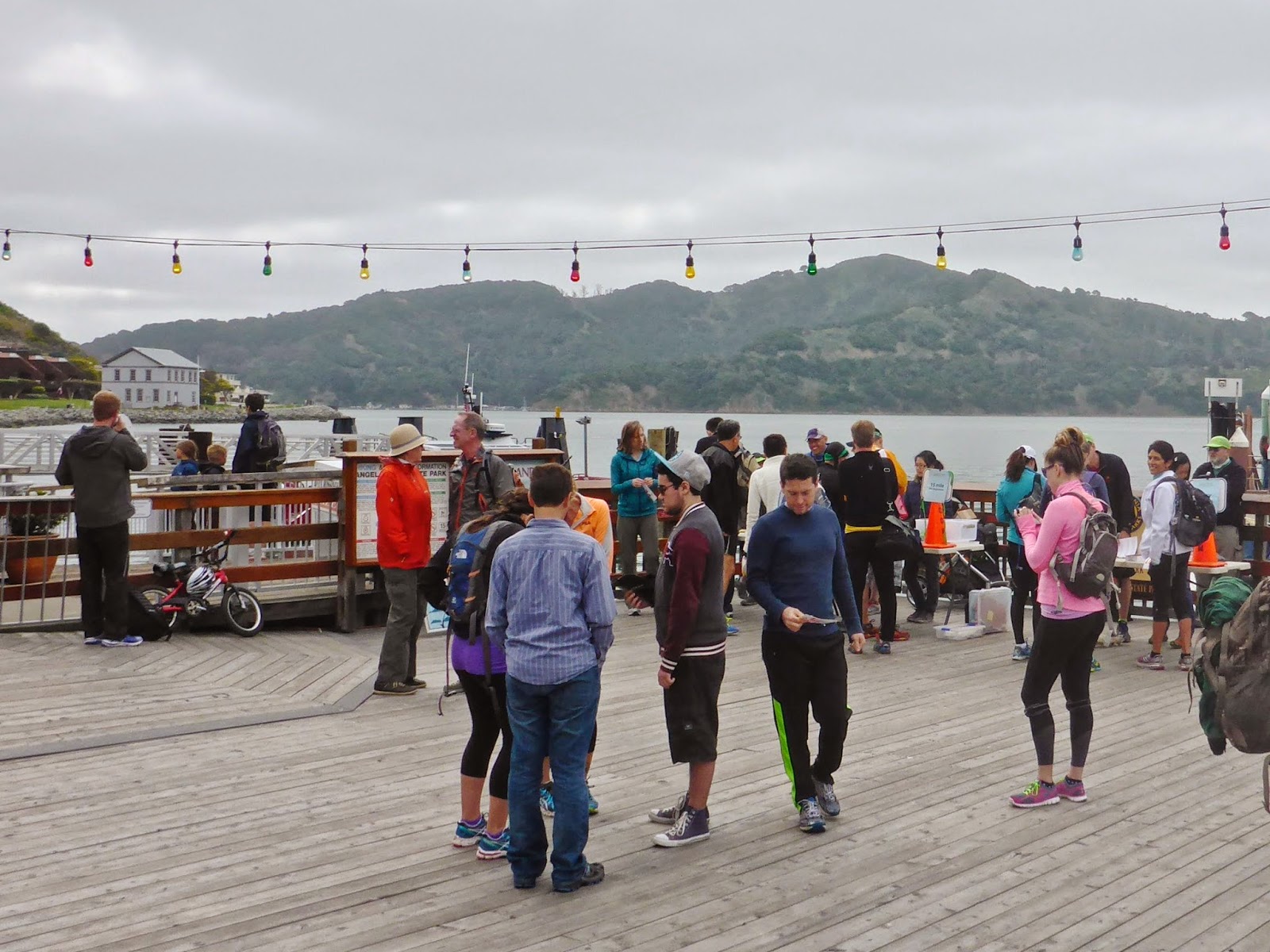 The first ferry to Angel Island leaves Tiburon at 10 AM. There is a registration table set up near the dock where you can pick up your bib.

Warning: They do NOT supply dramamine. Or a proper life vest. (Supposedly the ferry has life vests for everyone, but I didn't see anyone wearing one. There ought to be a law.)

Eventually we had to board the ferry. A unique thing is that all the start/finish stuff is stacked up near the dock, and runners just grab something as they go past. (Unless you are like me and wait to be nearly the last to get on that thing.) It's also worth noting that there are a lot of normal people getting on the ferry too. They tended to look at us like we were mildly deranged. If they only knew… 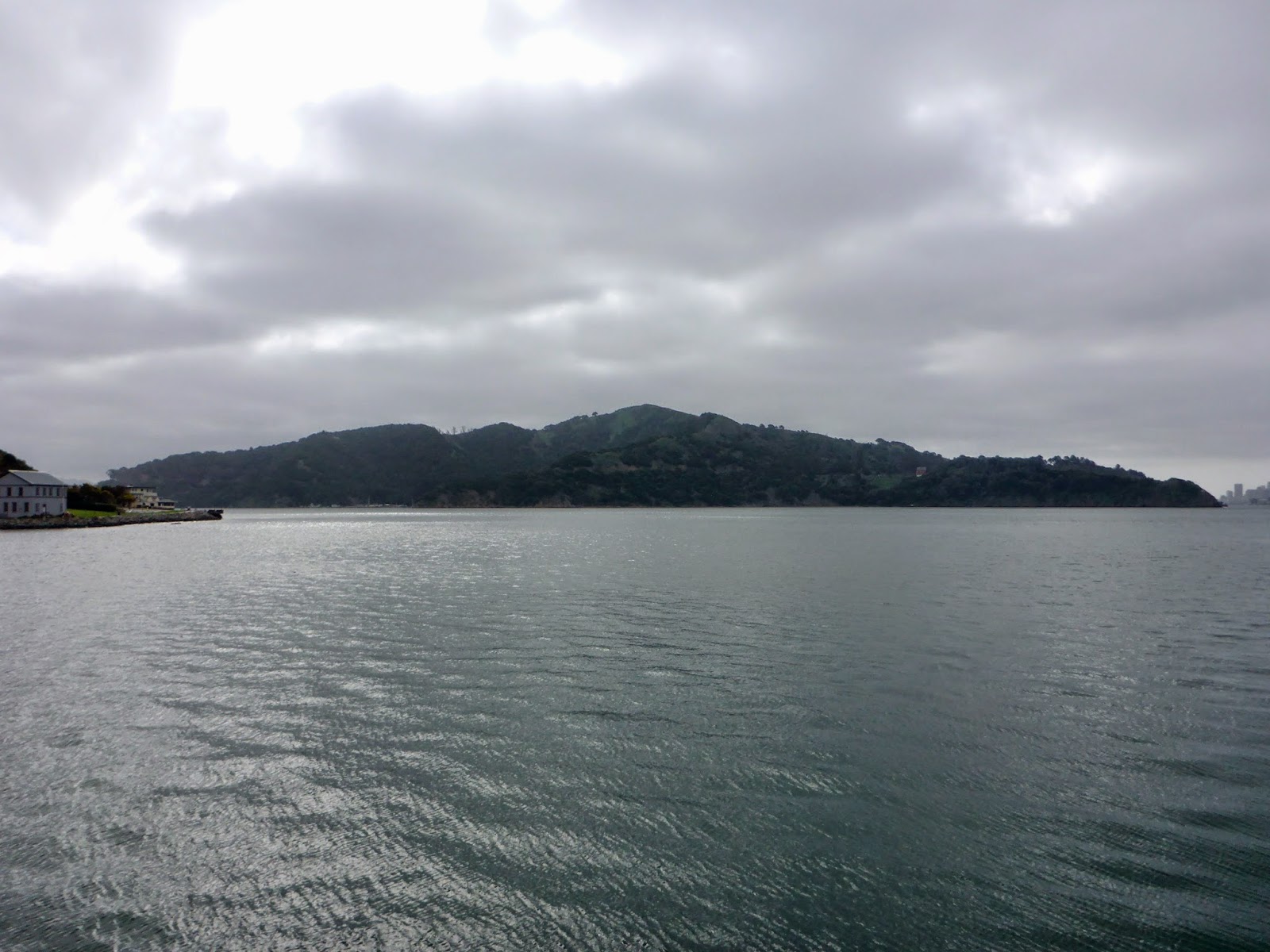 Angel Island is surprisingly close. I believe there is an event that involves swimming to/from there. None of that made me feel any better as the ferry started off.

Also note how non-sunny it looks. It was pretty cool with a cold breeze at this point, however, it did clear off a bit and get significantly warmer later on. 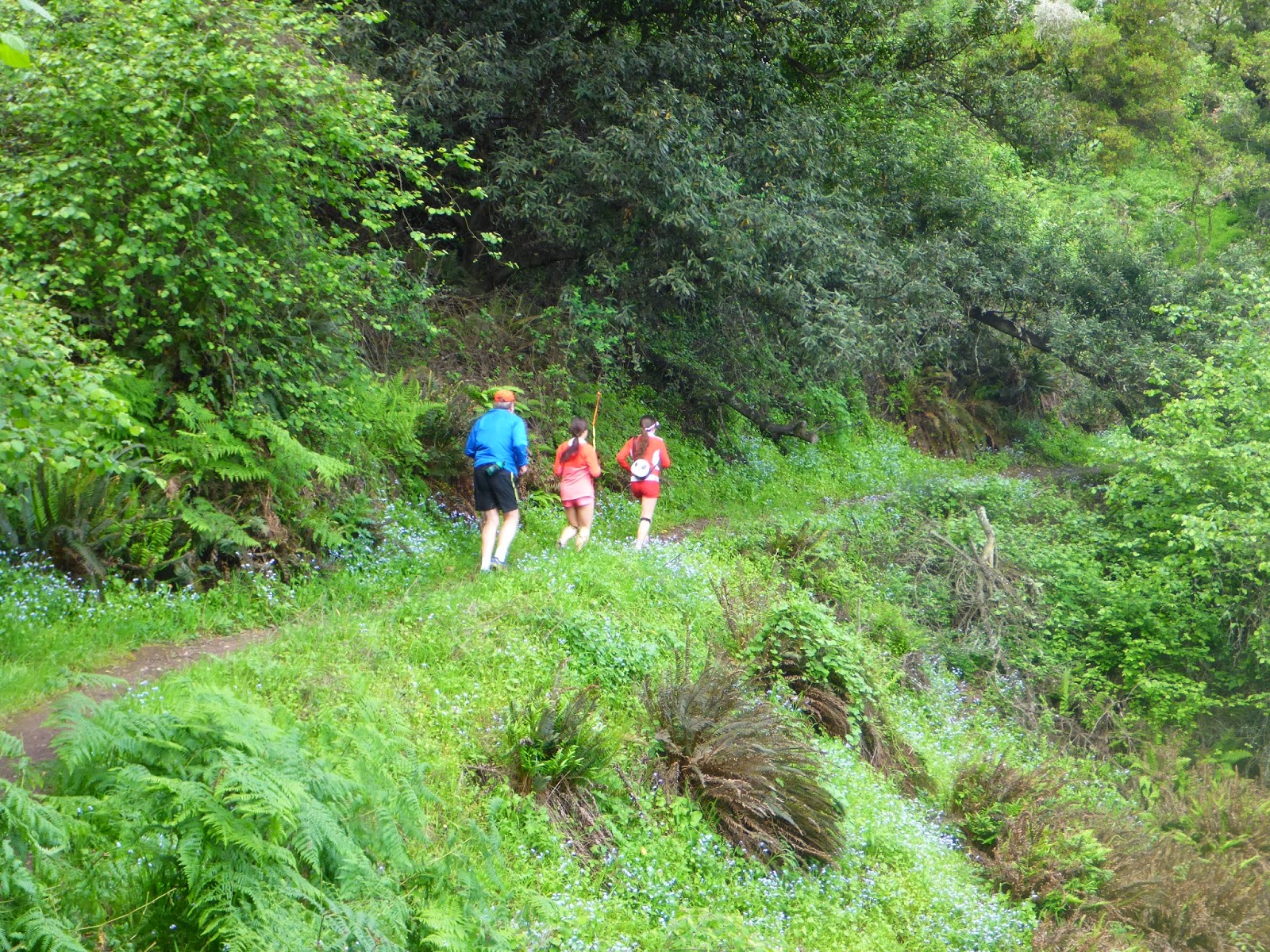 Eventually the 10M runners got to head out. There is a nice single-track trail that you take to get to the loop that you're running. It was so lush and pretty with lots of wildflowers. 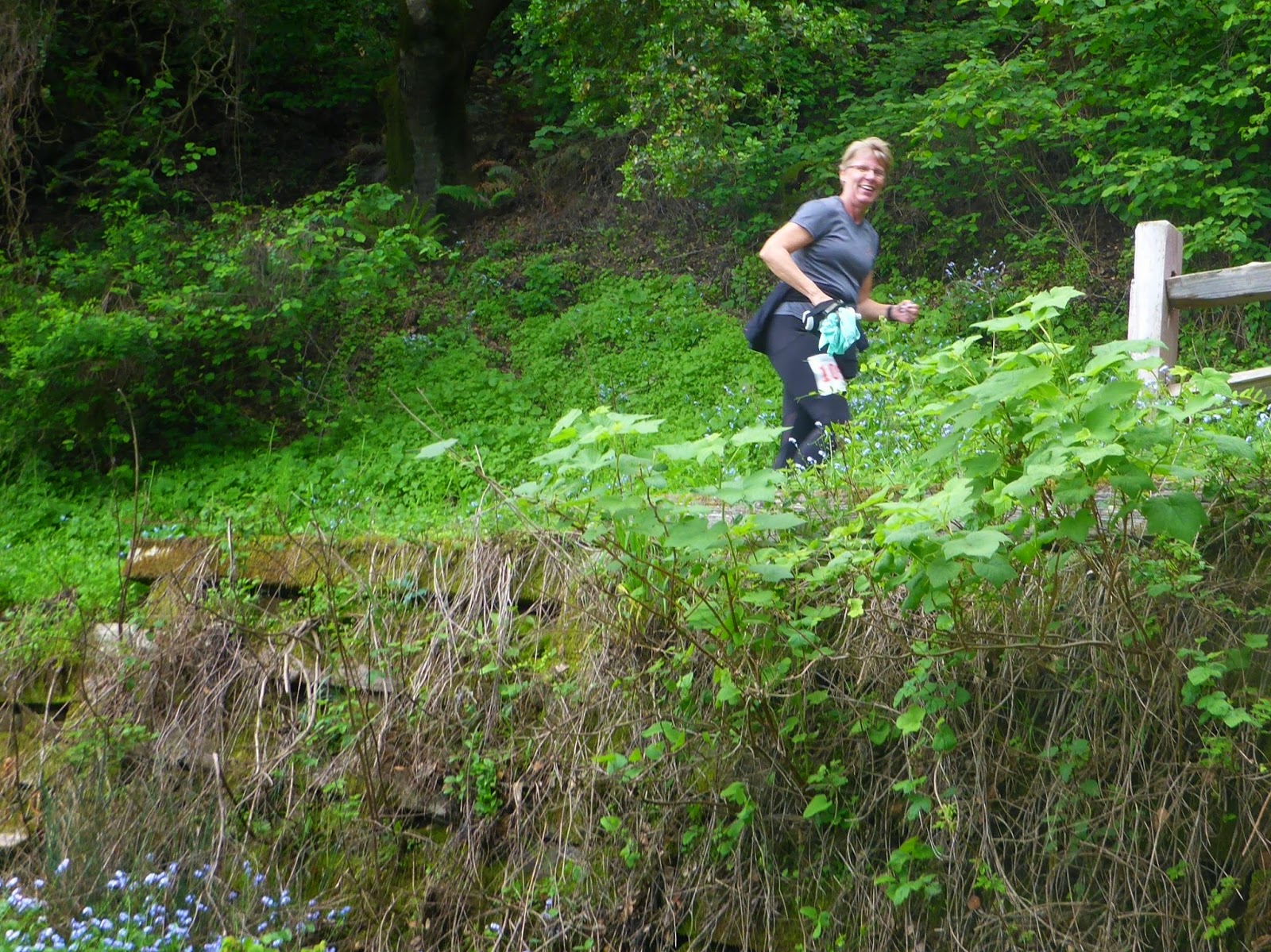 Mrs Notthat was not that far ahead of me. But it was early. 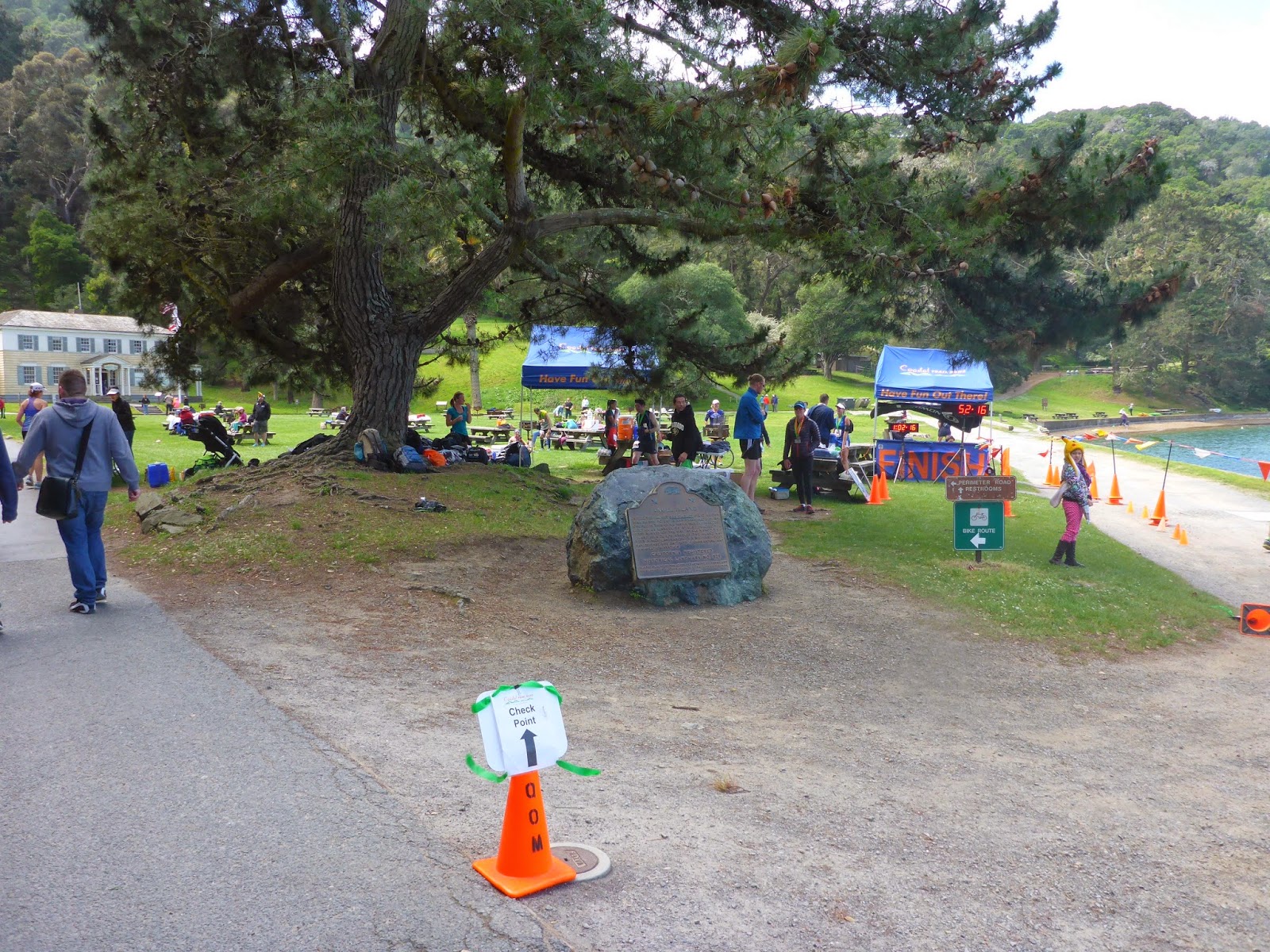 At the end of the middle loop, I was back at the start/finish area where I headed back up that single-track trail to the inner loop. The inner loop has by far the most climbing but also the best views.

The inner loop includes a short out-and-back that takes you to the top of Mt Livermore. I figured my chances of seeing Mrs Notthat here were pretty remote; I totally expected her to have long since finished this bit of the course. But then, there she was! I had a chance of catching her. Yes, it was a small chance, and mostly relied on her coming up lame or getting lost, but there was a chance! 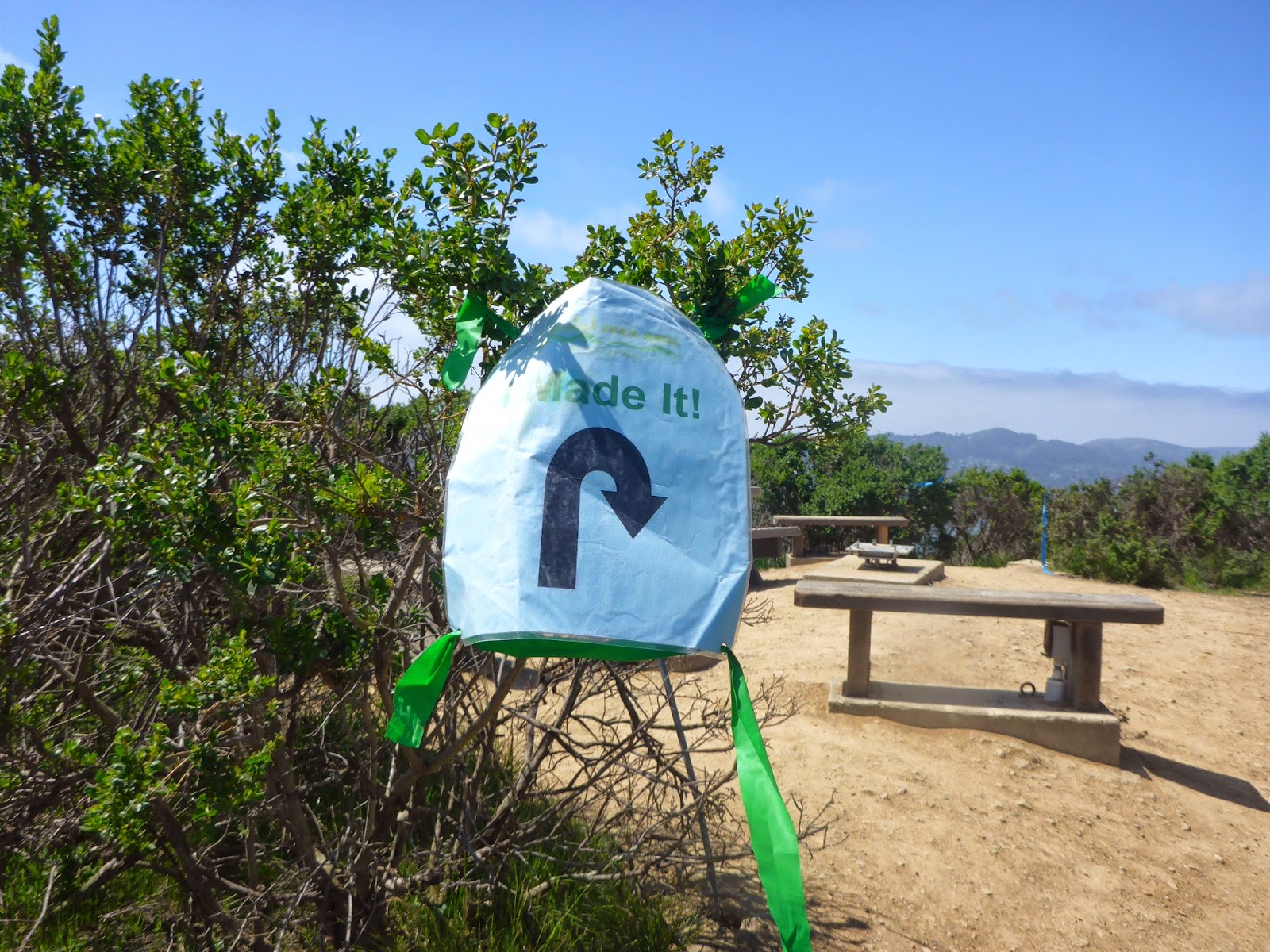 About 20 feet before you get to this point (the top), there is a bench. There were a lot of tourist-type people hanging out there, and I had to dodge around them a bit and managed to trip on a rock as big as a grape and fall into a shrub. I have a knack of falling in races when there is nobody to see it happen, but not this time. I don't think any runners saw it, but at least a dozen normal people had some surprise entertainment.

I promised to pay for the shrub, got up, and trudged up to the top. It got really quiet as I headed back down past all these people - sadly I disappointed them by managing to stay on my feet. There were a number of trees you had to duck under, or in this case, go around. In one case, I was jogging down a hill looking at the trail (so that I didn't trip on anything) and weirdly found myself ducking. Apparently my subconscious has eyes in the top of my head since it saw that I was about to crack myself on a low branch that my proper eyes had never even seen. I felt the bottom of the branch brush the top of my hat. Yikes! Now THAT would have been a show!

Both the middle and inner loops end with a mad dash down a set of stairs that are not nearly to code. But I survived them (Double-Dipsea training!) and ended up back in the dock area and just a bit from the finish. 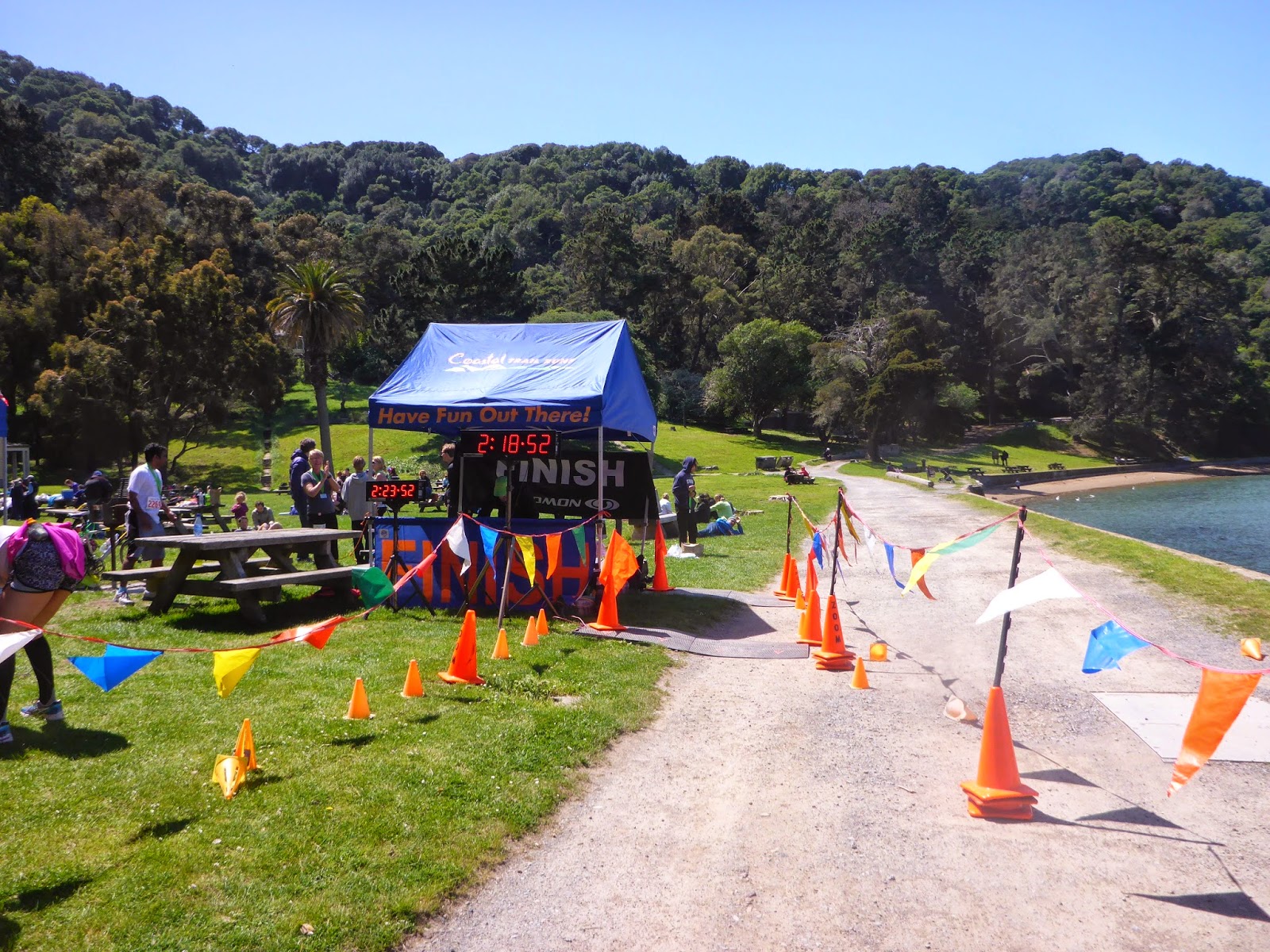 Age group awards are peculiar things. Both Mrs Notthat and I are in the same age group, but different sexes. Mrs Notthat got fifth (and beat one other). I finished after her but got first. And only. (But I'm not telling anyone that part.) 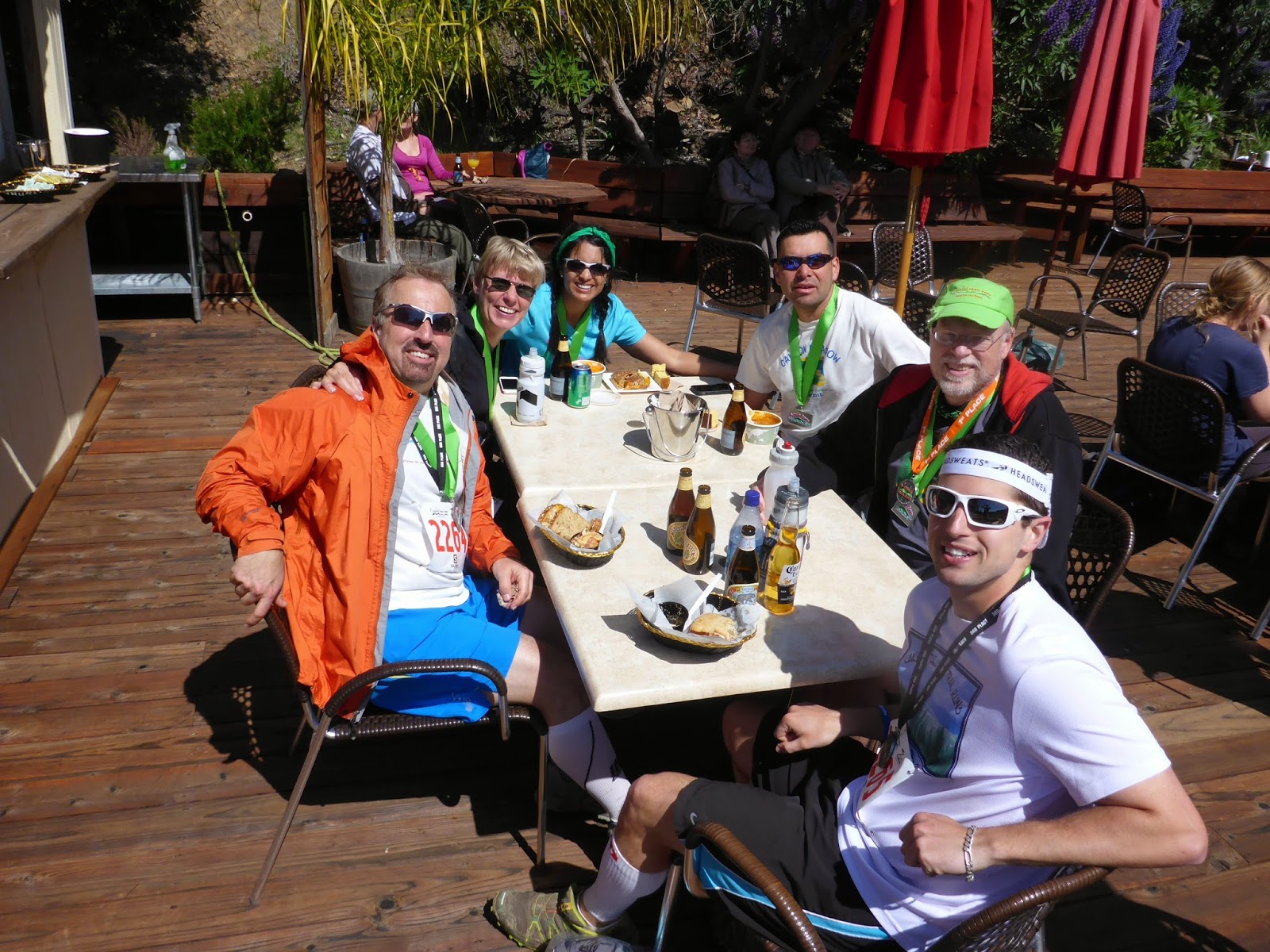 There is a surprisingly good cafe near the dock, so a group of us had a fine late lunch.

Eventually we had to get back on the ferry. By this point I was too tired to be very nervous. 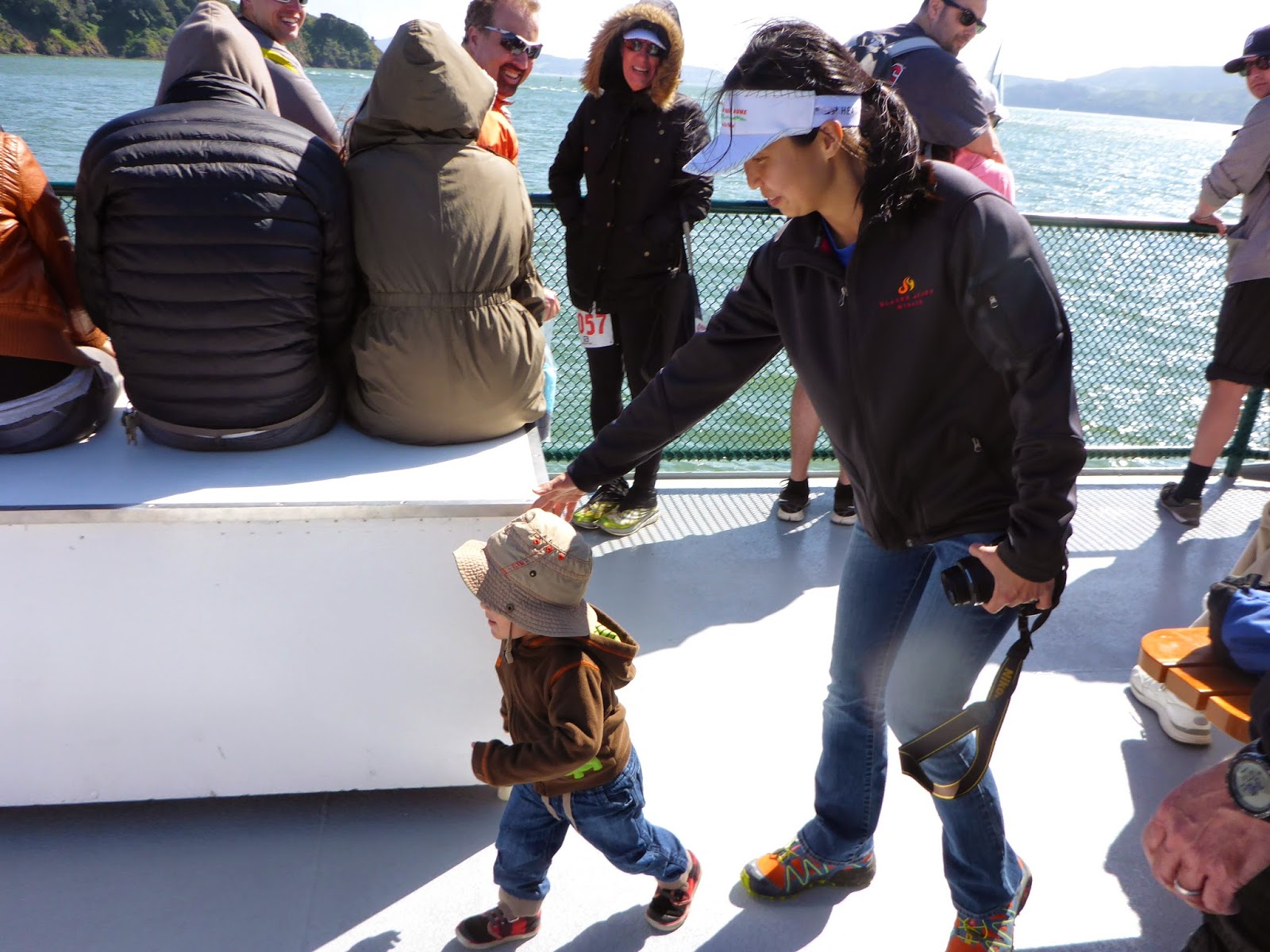 One person that loved the boat was Toddler Coastal, who kept running back and forth on the rocking deck. 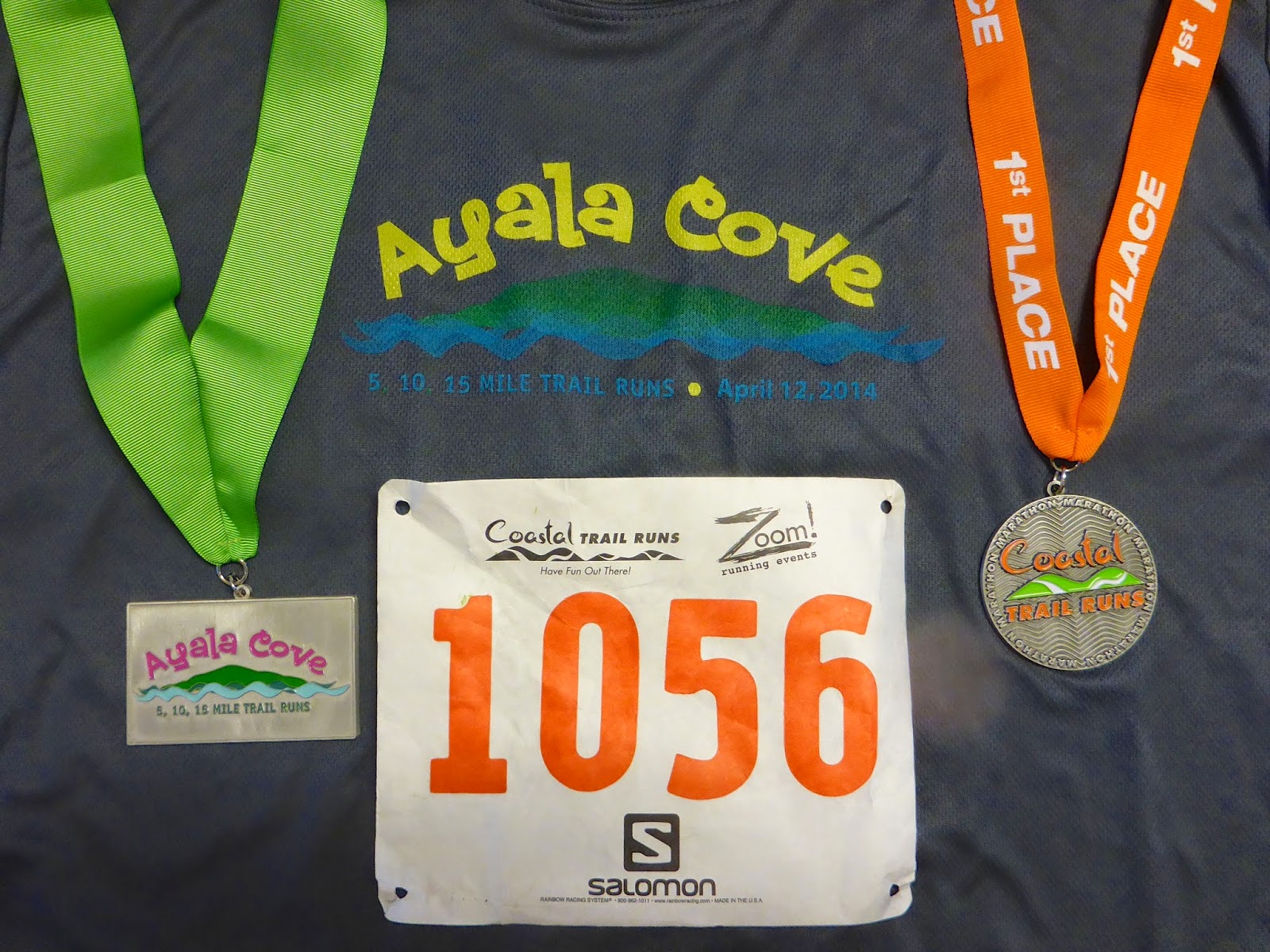 And if you are in the right age group, great bonus medals!

PS: You can see more of my pictures here.
Posted by notthatlucas at 6:26 PM 1 comment: