Huddart Park, just outside of Woodside, along with its neighbor Wunderlich Park are two of my favorite trail-infested places to wander around. Partially this is due to them being reasonably close to where we live, but mostly it's because they contain some of the best trails in the Bay Area.

I went back and counted, and it turns out that the new Inside Trail Racing Woodside Crossover trail race would be my 14th race in Huddart Park (2 as a volunteer). Most of those used very similar courses, which are famous for a short but treacherous downhill bit (after you get past the traffic jam) followed by a mostly gentle but long uphill bit. Depending on the distance you signed up for, you would either charge back down the hill or head over to Wunderlich and get some more climbing there.

Three weeks ago we ran a fun race here put on by the BayTrailrunners group (Whisky Hill Redwood Run). This race was very different from the others we had done, starting at the West Meadow picnic area I had never been to and using trails I didn't even know existed.

Fast forward three weeks and it's time for a new ITR race here. This race also started at that remote picnic area, and also used trails that I had never been on before. Even better, it included a new park - Purisima Creek Redwoods Open Space Preserve. (Sorry Wunderlich - no sweaty runners for you.)

I chose to run the Half distance, which meant I would not actually cross over into Purisima. But it did mean I had to go up the dreaded Richards Road Trail, which previous races had only briefly forced us to run.

The Half course was actually two loops - the first loop was the 10K course followed by the second loop, which involved a LONG climb that would take us all the way up to Skyline Road. As you can see in the simplified map above, this wasn't one of those courses where you could shut your brain off and just run; you needed to pay attention to the markings. Fortunately, it was well marked, with ribbons, signs, and flour (probably not gluten-free) so most runners had no trouble.

The race started on a relatively wide trail for a quarter mile or so, which meant there was no bottleneck once we switched to the single-track trail. 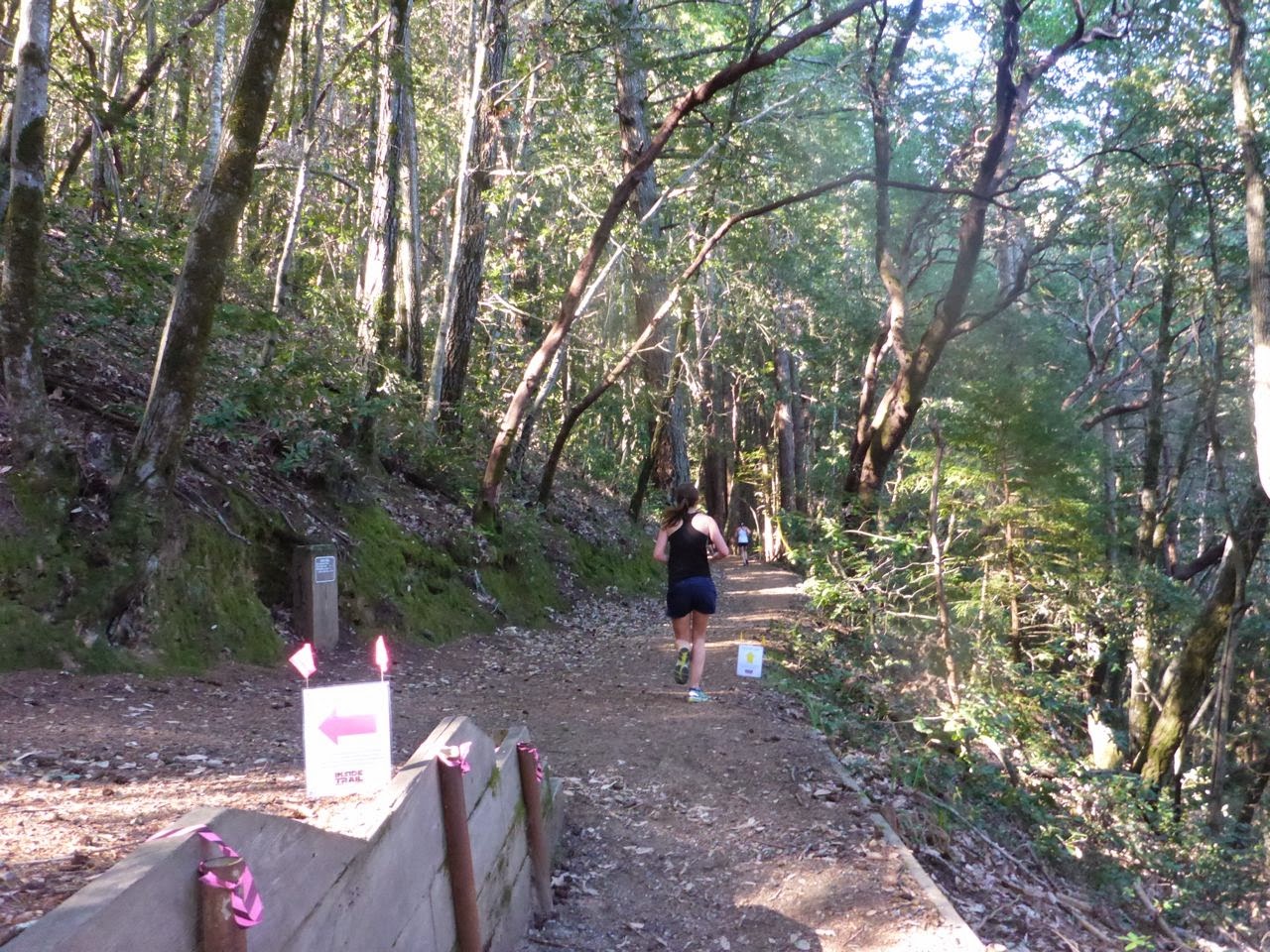 The Half runners had a 15 minute head start on the 10K runners. My hope had been to get to the top of our climb, roughly the halfway point of the 10K loop, before getting passed by a 10K runner. Sometimes my hopes are a bit absurd. In this case I was passed by the eventual winner, a 14-year-old name Ekul (not his real name) about a mile and a half into the course.

This was my first indication of how slow I was going up these hills, and how challenging that second loop was going to be.

A very cool thing was that Let's Wander Photography was out taking pictures, and they came out amazing. I love how they nearly make me look like a real runner!

The 10K loop ended by coming down that technical single-track that most races start on here. That bit of trail is fun when your legs and brain are fresh, but turned out to be too much for me at this point - about 0.2 miles from the first aid station, I tripped and hit pretty hard. I had a few new pains, and was a bit worried that I wouldn't be able to continue on, but after walking a little bit I figured out that the pains were nothing serious, and I would have get to keep going.

The first aid station, with the Perpetually Perky Racso and Ylrac, was at about mile 6. From here the 10K runners turned right and pranced to the finish, while the Half runners turn left and headed out on the dreaded Richards Road Trail.

The first mile or so of the trail is rolling and no big deal. This is the bit I had been on many times before. Then it starts going up. It wasn't hot out, but this is about the only exposed part of the course,
so it felt pretty warm. My watch said I was going up at a 47 min/mile pace. I honestly didn't think I was going that fast. (For you non-runners, a 47 min/mile pace is really slow. Picture how slow you walk when it's your turn to go into the dentist office. Then walk about half that fast. You would still have been a blur going past me.)

The one thing I will give myself credit for is never stopping. I ended up passing several people while lumbering up this hill, but only because they were taking frequent rest breaks. I also got passed by a dad carrying a kid on his back, so there is that.

Eventually the hill really ends and you make it to the aid station at Skyline Road, about mile 9 for the Half runners, and our turnaround point.

Lliw, not his real name (on the right, who was involved in putting together this new course) told me he had been getting a lot of glares from the Half runners. I told him that the advertised 2750 feet of climbing was way low, but he insisted it was exactly correct. (He was right, but man - that was the hardest 2750 feet of climbing I've ever done. For the record, the normal ITR Half course here only has 2100 feet of climbing.) 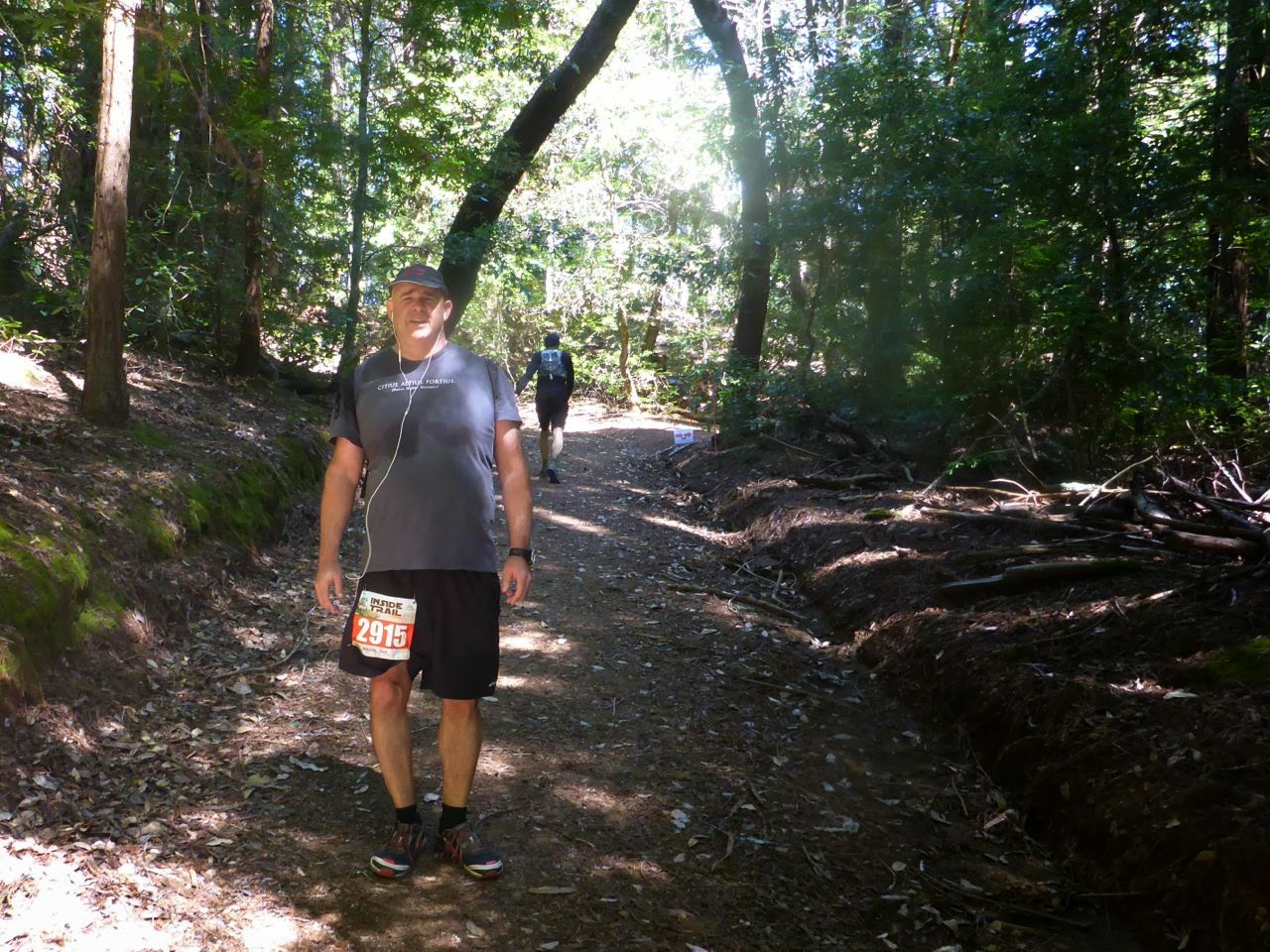 There was a short out-and-back getting to the turnaround aid station, and I was curious whether I would see Coach Luap (not his real name). I had gone so slowly up that hill that I had to believe he would be hot on my heals, and I was right. From the turnaround, we had mostly downhill trails to the finish. By this point, a lot of the faster 50K and 35K runners started passing me. 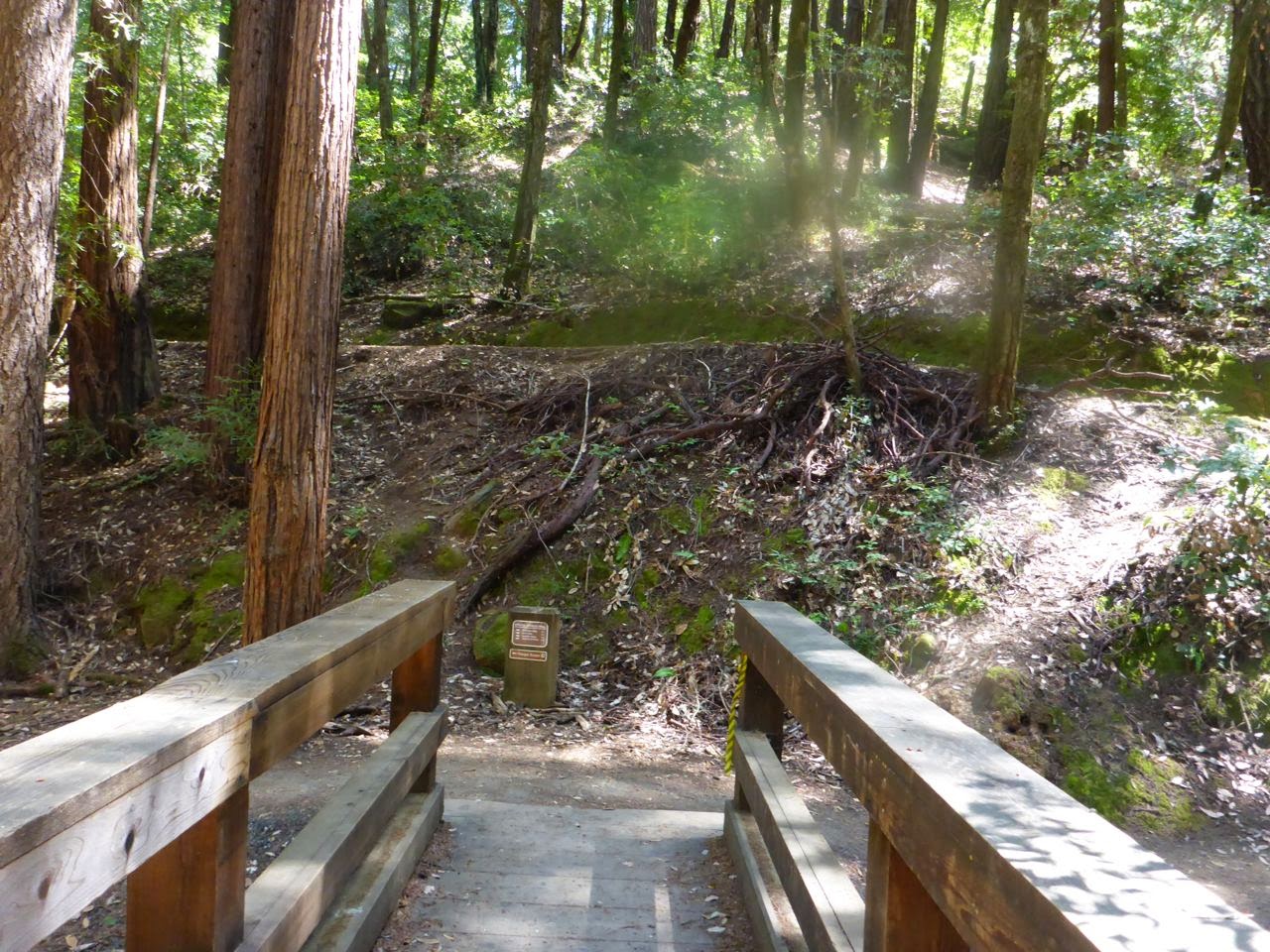 After bombing down the trail for a couple of miles, you cross this bridge, and cruelly, have to start climbing again. It's not steep, and it's not for long, but it's still a climb that I could have done without. 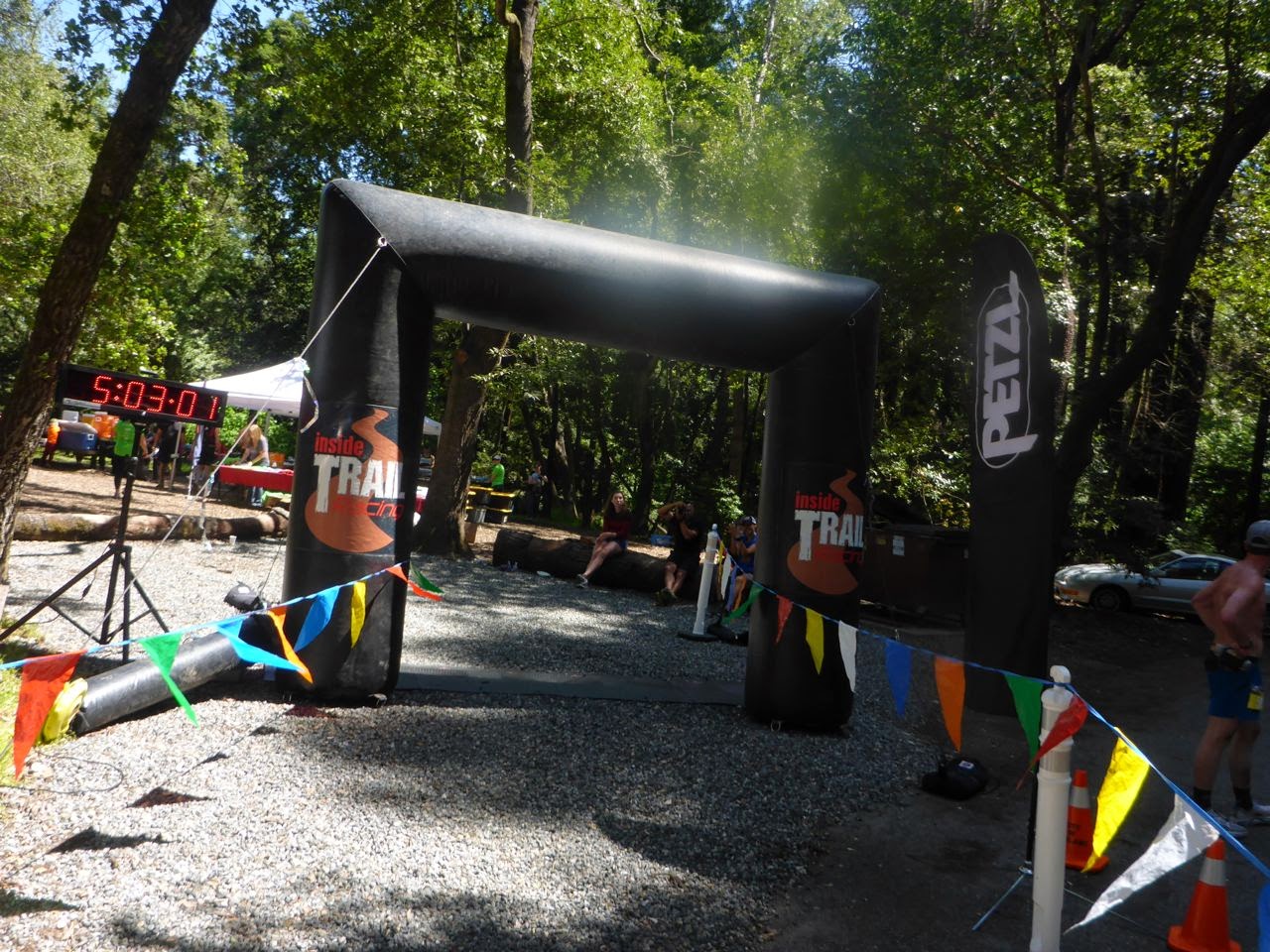 The finish line, finally. It took me a ridiculously long time to get to this point, but I did it. Racso took a couple of pictures to prove it.

Before the 50K started, I told Tnek that my main goal was to finish my Half before he finished his 50K. He laughed, but I had my doubts. I ended up beating him to the finish line by about seven minutes (he had a 30 minute head start, but ran a fantastic race for 11th overall).

Coach Luap ended up about 30 minutes behind me. Amazingly, he was not the coveted Dead Last Finisher though. Sadly, he had taken a nasty spill at that point a mile from the finish where we headed back uphill, and managed to crack a rib. Weirdly, he was still smiling.

This was a really hard race for me. My training has been sporadic, especially with regards hills, but it still should not have taken me a little over 4:30 to finish this. While crawling up the Dick Trail, I promised myself I would downgrade from the Half at the following weekend's Brazen Diablo trail race. But when I got home I realized that the Diablo course is shorter (this Half was 13.7 miles) and has less climbing than this course had.

PS: You can see more of my pictures here.
Posted by notthatlucas at 2:29 PM 2 comments: