Getting our GECKO on for the sixth time

Every year since 2011, Mrs Notthat and I have timed our family-visiting trips to Pagosa Springs to coincide with one of the trail runs put on by GECKO, a local race company that holds events to raise money for kid's outdoor programs. The races are always a blast and well done, and even better, we have recently been able to get more and more of the family to take part. It's now something they look forward to, and they have even done a few events on their own.

This year we were able to break in three family members that had never been able to participate previously (spoiler alert - they all did fantastic, of course).

For the third time, we picked the Turkey Track Trail race since it worked out well with the end of the school year and is a relatively mild course. All three times we have run this race, the course has been a bit different, although many of the trails have been shared between all three versions.

There are four distances at this event, and each is a loop (for the Marathon, you run the Half loop twice). For the Half and Marathon, all of the trails were single-track - some smooth and some determined to trip you up. The course was fairly flat, for a Colorado race (I showed 870 feet of climbing, but suspect it was closer to the advertised 750 feet for the Half), but did have enough climbing to remind you that you were at about 8,000 feet of altitude and oxygen was a bit scarce.
_____________________________

I'm one of those people that studies the course map and the elevation charts. Above shows the chart from the race website compared to what my GPS watch came up with. The overall shape and actual amount of climbing were similar, but there were some interesting differences.

I find that it's most useful to know the positions of the aid stations relative to the elevation chart - if you look at the position of the second aid station, I was expecting a pretty good climb out of it, but instead, we had more downhill to do. When we hit the third aid station, I expected another mile of climbing and then a nice cruise to the finish. Instead, after a short downhill, we actually started up the real climb, which ended just before the finish.

None of this was much of a big deal since the climbs were pretty mild, but it does give a peek into my mind as I approach a race like this. I knew after the second aid station that the elevation chart was not matching expectations, but I also knew it really didn't matter. The weather was awesome and the trails in great condition, so I just went with it.

Usually the races start about 15 minutes apart or so, which means that the shorter distance people have to hang around forever waiting for the long distance people to finish. In this case though, the long and short distances would all finish much closer to each other. The theory was that the short distance people could sleep in and show up later, and not have to spend so much time waiting for us after their race. As it turned out, most of Team Lucas showed up well before 8 AM and thus had a couple hours before their races to hang around. (Mrs Notthat and Shonna were smart and took advantage of the later start by sleeping in a bit.)

Team Lucas this year had ten runners (plus two in the kid's race). Two of us, 14-year-old nephew Blailand and myself, ran the Half. Mrs Notthat ran the 10k and the rest ran the 5K.


It was very nice and cool at the start. It was also sunny, which was a bit of a worry since heat + altitude = misery for me. (Bad math!) 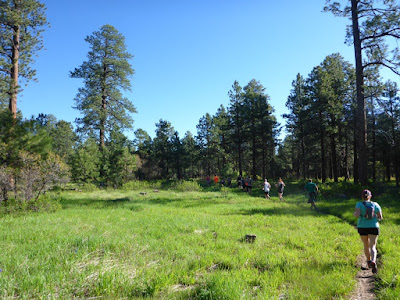 The trail alternated from crossing sunny meadows, like above, to darting through trees. In all cases, you had to be alert for tripping hazards - most of the time the trail was smooth, but there were often little rocks and roots doing their best to bring you down. 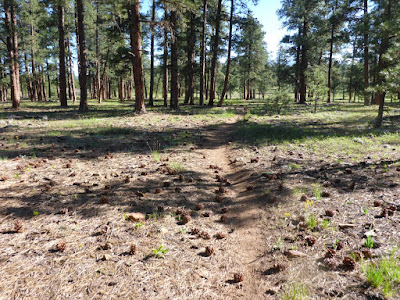 And pine cones - there were stretches where the pine cones and pine needles also kept you on your toes (and often concealed the real trip hazards).

But even with all that, and that's not really much, the trails were fantastic. 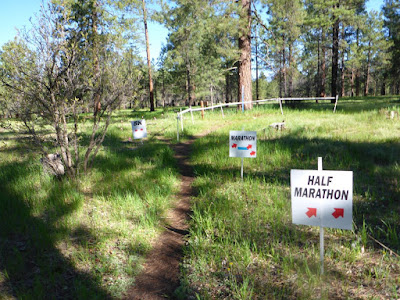 This was where the Half loop separated from the 5K loop. Really hard to miss this turn!

There were two kids we could see ahead of us - both had gone out kind of fast (just like Blailand did the first time he ran this), and my hope was to get past both of them. Blailand has won a number of age group awards, but they are usually by default. This time, I hoped he would get an award and the satisfaction of knowing he beat someone to get it. That kid in the above picture was about a quarter mile ahead of us, but we were closing in on him.

The first aid station, about mile 3, was nice to hit. Blailand had weirdly decided not to carry water with him, so these aid stations were particularly needed. (I was carrying two bottles and told him one was his whenever he needed it. He held out until near mile 9 when he finally took the bottle.)

Shortly after that aid station we passed the first kid and set our sights on the second kid, who turned out to be a girl. Back when Blailand ran his first race, he was bummed to be getting passed near the end, but was REALLY bummed when girls passed him. (He was 10 - these sorts of things mattered.) Now, he was going to get to pass a girl.

But she was tough - it would take a number of miles before we would catch and pass her.

There were occasional bits of trail that were infested with rocks - the trip hazards were no longer hard to spot.

The second aid station was at about mile 5.3. According to the elevation chart, we were going to start dealing with climbing now, so we both got nicely hydrated and fed. It was still pretty cool out, but we had been warned that the climb was largely exposed.

When we left that aid station, we continued going downhill, which surprised me. But the important bit was that we were gaining on the second kid, and shortly after this picture, we passed her.

Most of the trail intersections were marked like this - you had to work a bit to miss a turn or end up on the wrong trail.

The third aid station was momentous for a couple of reasons:


In my dreams I had hoped to get here before any of the 10K runners. This was their mile 2, but they started two hours after us, which meant if we could cover that 9.2 miles in around two hours, we would beat them. But according to the elevation chart, we had a lot of climbing to get to this point, so realistically it was unlikely we would beat the faster 10K runners. But I had did have reasonable hopes of getting here before Mrs Notthat.

In the end, because we really didn't have all that much climbing to get here, we really did end up beating the faster 10K runners! So now my goal shifted to getting to the finish before Mrs Notthat.

The first 10K runner passed us shortly after that aid station - and as a very cool thing, it was a woman!

The second 10K runner was also a woman. And the third! It wasn't until the fourth runner passed us that a male showed up - Colorado women are truly special! 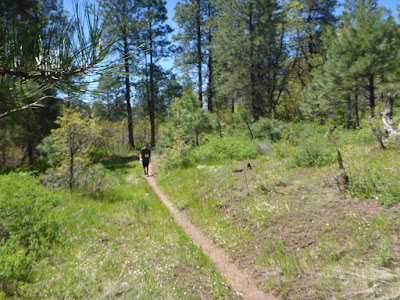 When we left that last aid station, we started with some downhill, but it wasn't long before we were on the hill I had been looking for since the second aid station. It had warmed up a lot by now, and lots of it was exposed. Blailand started slowing down - I think he had gotten behind on fluids and calories and was now paying the price (even though he had my second bottle - it had Tailwind in it, and that's a bit of an acquired taste, although I think it did him good to drink it). 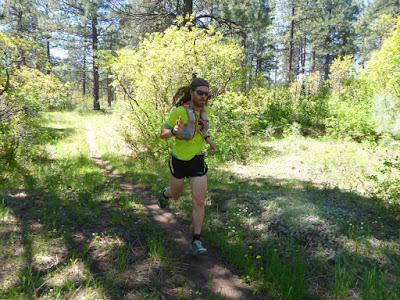 A minor goal I had was to finish the Half without getting passed by any Marathon runners. Now that I had seen most of the course, I figured there would be several fast Marathoners that would pass me. As it turned out, there was only this guy (who I believe won the 50M race last year). 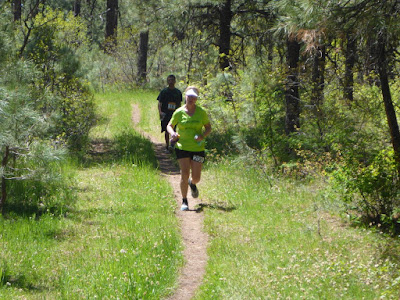 And then Mrs Notthat arrived, looking surprisingly fresh. The altitude normally does her in here, but for this race, it wasn't bothering her much. This was at about mile 12.5 for us, mile 5.5 for her, and she blew past us.

We could hear the finish line at about a quarter mile away, and it was great motivation to pick it up a bit.

Now that we were finished, the question was how many of us would get age group awards. When we first started doing these races, many of us (especially the kids) would get awards since there weren't that many runners. That's not true any more - you have to really work to get an age group award now. 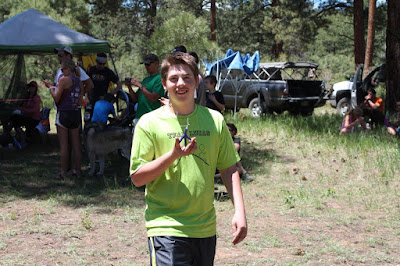 Denton, who ran his first race ever, got third in the 19-and-under age group in the 5K! That was pretty surprising since there were a lot of youngsters in that race. 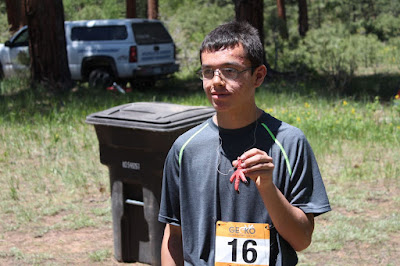 Blailand got second in his age group, and not by default either! He worked hard for that and was really happy with the result. Official results haven't been posted yet, but he came really close to a 3:30 finish time, which is a huge PR for him.

This was a blast! I was so thrilled that Shonna, Denton, and Dallas were all able to join us for the first time (and sad that Angie had to sit it out). I think this might have been Katelynn and Kyler's first non-kid's GECKO race.

A HUGE thanks to everyone at GECKO and all the volunteers that made this race possible and so much fun! We always look forward to these events and wish we could do more of them (there are also events involving swimming and biking). Pagosa is fortunate to have such a great group in the area.

And also thanks for making sure we didn't get eaten by any turkeys!

PS: You can see more of my pictures here.

PPS: You can see and download many more of my pictures in full resolution here (taken while going around the course) and here (taken by Lance and Angie in the start/finish area).

Posted by notthatlucas at 1:32 PM 2 comments: