Note that this is going to be long. Really long. War and Peace long. But there are a lot of pictures so it will go faster than you might think. Think War and Peace from Readers Digest. (All of you under 40 will have to google that.)

For the seventh year in a row, I was invited by Stevens Creek Striders to join their Last Chance party, ongoing since 1982. This is an aid station (the BEST aid station) at mile 43.3 of the Western States Endurance Run. 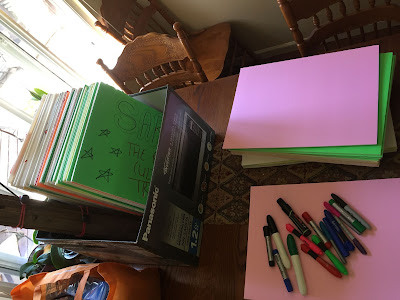 First things first, I needed to make the signs. Starting in my second year at Last Chance, I thought it would be fun to make signs for the runners I knew in the race. That year I made four signs. This year I made 14 signs (plus three made by others, and there were a couple of general purpose signs that I just reuse). Something a little different this year - I also made a couple based on requests for people I didn't know.

My next goal was to convince my Soul to haul more stuff.

I picked up a soft rooftop carrier bag, filled it with a bunch of light stuff, and freed up a lot of interior space. I knew we were getting more ice than ever this year, along with some bonus water jugs, so I needed as much room as possible.

I met Amer at the WSER warehouse in Auburn on Friday afternoon, and he turned out to have a vehicle that was big enough to hold my vehicle AND all the ice. We grabbed about 800 pounds of ice and ten water jugs. The trick now was to get all this ice to the aid station before it melted. (Not that being at the aid station was going to keep it from melting - we wrapped it up in a couple of tarps with a layer of insulation, but the heat was remarkable, and it never really got very cool that night. There was a lot of meltage.)

The Last Chance aid station is wildly remote - just getting there is not trivial - which makes it a bit stunning that so many people willingly give up their weekend to hang out here. There were over 50 people volunteering here - many of which showed up Friday and camped out.

A fun thing was that Tammy and Donna joined us there for the day. (After five minutes fighting the mosquitos, I think they were having second thoughts, but eventually the mosquitos go away when it gets too hot for them.)

Amer manned the grill for the second year, and made the best craft-quality grilled cheese sandwiches.

The first runner in was no surprise - Jim Walmsley came in at about the same time he came in last year, which was way ahead of everyone else. We knew the snow and mud of the high country was going to slow down the runners, but apparently not Jim. 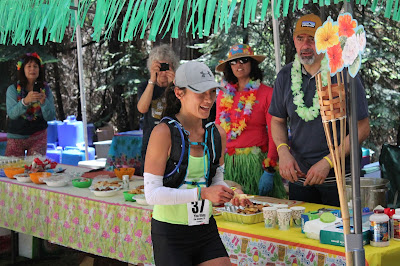 The first woman runner was YiOu Wang! And she looked really fresh and ready to dominate the rest of the course. (Sadly, she wouldn't, and would end up getting cooked in the heat.) 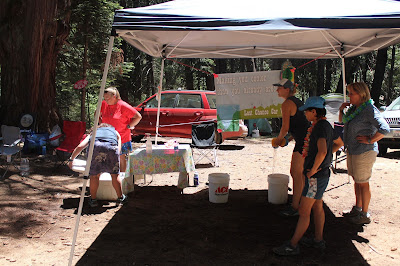 Something we've never done before was to have an awning over the car wash area. It was really hot by now, and the runners needed every break possible from the sun, even while getting ice cold sponges squeezed on them. (The ground would get muddy, so this setup would end up migrating around a bit to let the mud dry out.)

Every year, Last Chance gets to enter a runner into the race. This year was Mandie's turn, and even better, this was her first 100M race! (Spoiler alert - she nailed it! 14th woman in well under 24 hours!)

Kim was another Last Chance vet that got into the race (using traditional methods - he had only two lottery tickets!). It was his second 100M race, and first Western States - he nailed it! 36th man and just under 23 hours!


Chris and Ace are attempting the wildly hard Original Six Hundo Challenge, where they run each of the original six 100M races in the same summer. This race was the second of the batch.

They both got in to the aid station later than planned, which was actually good news since it meant they were adjusting their effort and pace to match the conditions. As a spoiler alert, they would both finish!


It was so great to see John get into the race - it took him four years of lottery frustration! But he was determined to make the most of it, and was running a smart race. 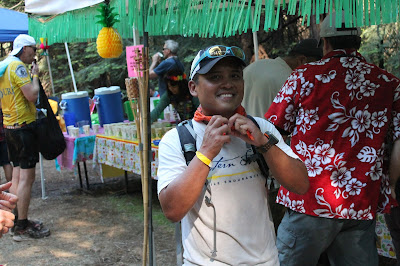 Rick was an amazing story. This was his sixth year trying to get into the race, and instead of getting in, he made it on to the wait list. Western States added a wait list for the first time this year, and since it was the first time, it was unknown how many of the wait list runners would get in (or at least get offered a spot). The list had 50 names on it - Rick was number 33 - and two weeks before race day, he was in. Eleven runners ahead of him on the list chose not to run the race. (Being on the wait list is really hard - do you train as if you are getting in? Do you book flights and rooms and gather a crew for something that might not happen? Or do you switch to a backup plan?) Rick chose to assume he would get in, and it paid off.

(As it turned out, I believe the 39th runner on the list was the last one to get in, getting Gordy's spot at the very last minute.)

For reasons that are unclear, we didn't have the traditional sweeper horses this year, but instead had the more standard sweeper runners. I'm not sure how many runners dropped at our aid station, but I think it was only one or two at the most. Sadly, several runners that left our aid station late would succumb to the struggle of the hot climb up Devil's Thumb and end up dropping there.

Once we had everything packed, it was time to make a mad dash for the finish line. This year, we knew there was little chance of getting there in time to see Walmsley win it, but we pushed on any way.

At Last Chance, we are very isolated. We have to drive about 40 minutes to Forresthill before we get a usable cell signal. So we are completely in the dark as to what's going on in the race, outside of our little piece of it.

I had to make a stop at the warehouse in Auburn before heading to the stadium, and while there, got a call from Amer letting me know that Walmsley had dropped and there had been no winner yet! So I ended up getting to the track in plenty of time to see Ryan come steaming in and grabbing the win. 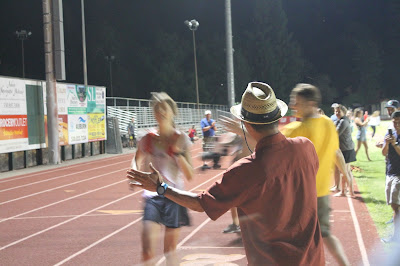 A bit later, the women's winner Cat came in.

I caught a stupid cold a week before the race, so I did something I've never done here before - I got some sleep. Not a lot of sleep, but enough that I missed seeing several runners come in that I would have really liked to see finish. But the sleep was very needed.

It was at this point that my day took a bizarre turn for the worst. After getting this shot, I ran from the track onto the edge of the football field's grass to get ahead of Ace and grab a couple more pictures. (Who am I kidding - at least a dozen more pictures.) And I stepped into a slight depression and twisted my already fragile right knee. Instantly I was reduced to a painful hobble. I managed to get a few more shots, but not the dozen I had hoped for.

It was so great to see Rick get this finish! He beat so many odds and a really tough running day to earn this - very impressive!

The last runner I knew on the course was John, and he came in with plenty of time to spare. By this point I was reduced to just standing in one spot to take shots, so I missed a great finish, but thankfully there were many others there that didn't miss it.

And that was about it for me. There was still 30 minutes left in the race, and from past experience, I knew that this last 30 minutes was going to be a bit wild. As it turned out, 23 runners would finish after John - two of those in the last minute, including one woman with nine seconds left! But I missed all that.

In retrospect, I should have hobbled over to the small stands and cheered all these runners in, but all I could think of was how hard it was going to be to drive the three hours to home. (Actually, the drive was fine - thanks in large part to the sleep I had gotten - but getting gas and a burger was challenging.)

I'm pretty sure this year's running of the race is going to go down in legend as one of the toughest ever.
It was a blast as always. There was a worry that we would run out of ice due to the high meltage, but that turned out not to be an issue. There was also a worry about water - in theory the Car Wash was supposed to stay away from the spring, although we were told on Friday that we were OK to use it. Probably. So we ended up using a mixture of the spring water and jug water (thankfully the spring was working reasonably well this year, but we've learned that we can't really count on that).

And for the record, the mosquitos seemed to be very happy to see us. VERY happy.

Posted by notthatlucas at 2:53 PM No comments: