It's mostly about the trees. And hills. But mostly the trees.

I have done a lot of races out of Huddart Park in Woodside, put on by four different (!) race companies. The thing they all had in common is running through LOTS of trees. Big trees, small trees, more big trees, some fallen trees - just plain a lot of trees.

If your thing is expansive views while out on the trail, you will be disappointed (for the most part) by these trails, since there are all these trees in the way.

Inside Trail Racing's Woodside Ramble on Saturday had perfect weather and their largest turnout ever. (It was the first time we had to park at a remote lot, although that was largely our fault since we live reasonably close and arrived fashionably almost late.)

At least we got there early enough for me to get a picture of Annod (not her real name) in the bathroom line. Seriously; it was a line until I pointed my camera at it and Annod (who said she was going to waddle around the Half today, and finished in a hair over two hours) was the only one that didn't run off. 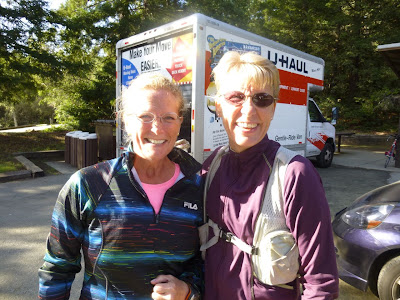 After I got bored tormenting the women's bathroom line, I wandered back and found these two hanging out in the sunshine. It really was pretty nice out (and Mrs Notthat did take her jacket off before the race started, which is very unusual for her), but still, they were enjoying the sunshine. 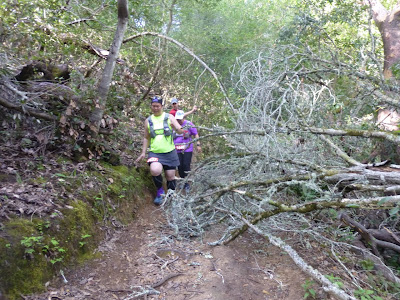 We had been warned that there were several downed trees along the course, and we came up to our first one shortly after the start. 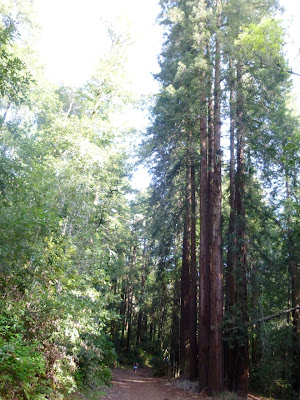 But not all of the trees had fallen. I never get tired of running through the redwoods like this. 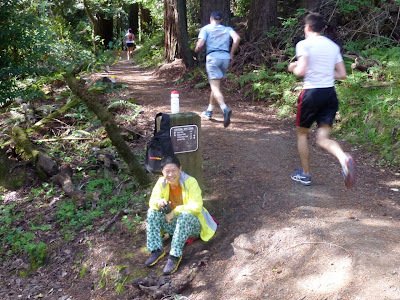 In the middle of the Big Climb, volunteer PJ Mas (not his real name, but what he was really wearing) was hanging out at a trail junction making sure nobody took a wrong turn. And taking pictures. Like this one of me. 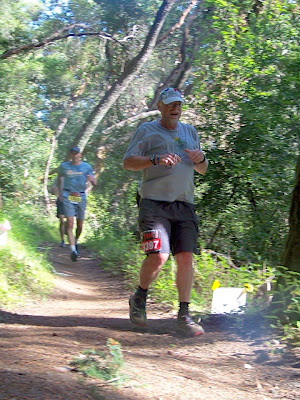 I love how I always look like I'm on the edge of disaster. And I think I nailed the "waddle" look. 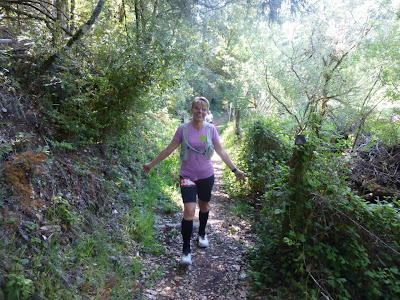 I wasn't sure how far ahead of me Mrs Notthat was, but I wasn't moving very fast so I figured a good estimate would be "a lot." This Half Marathon has an out-and-back near the halfway point, and I hoped she wasn't so far ahead of me that I would miss her there. As it turned out, I barely caught her before she scampered off back down the hill. 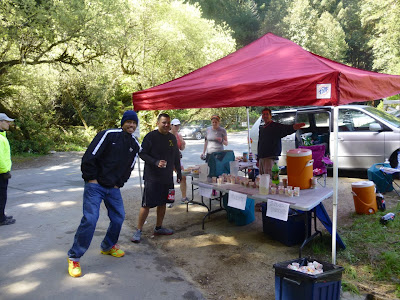 The aid station is about halfway along that out-and-back, so you get to see these volunteers twice. They were obviously having a bit too much fun. 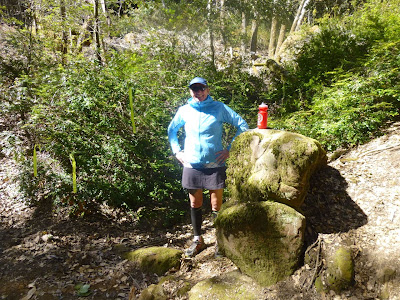 The best sight though was K-Dub guarding the Half turnaround. This meant I was a bit over halfway through and that a large part of the rest of the course would be downhill. 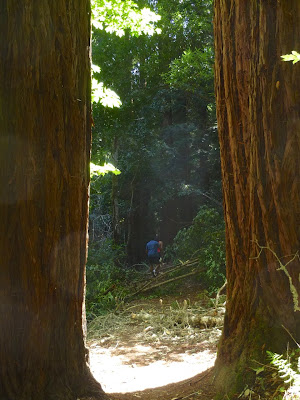 I like this picture showing the tree debris on the course while looking through these huge, decidedly non-debris trees. 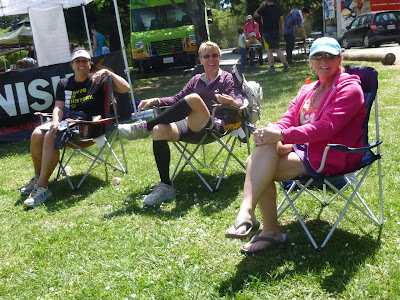 The funny thing was when I went to look at the results. I saw Mrs Notthat's name at a time that was really close to when I thought I had finished, which really surprised me. She assured me she was done a LONG time ago (she likes to rub it in just a tiny bit), and when I looked farther up the list I saw my name. Some day, when I'm in reasonable shape, I would love to finish with that time. But it wasn't today.

But here's the cool thing about Mrs Notthat's time - she beat her December time on this same course by a little over ten minutes! 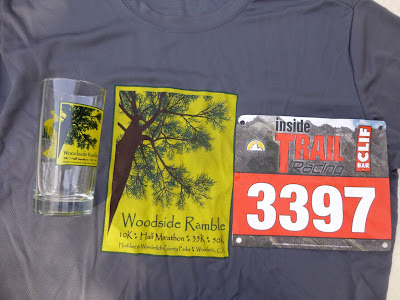 To nobody's surprise, this race was a blast! Everyone, from the ITR people to the volunteers to the runners made this a fun day out on the trails. The trails are wonderful and the hills aren't as bad as they look on the elevation chart.

You have to love a race where a machete would not be at all out of place.

Goats but no hill

We've spent a lot of time at Point Pinole Park, so at first the Zoom Point Pinole race didn't sound all that enticing. But then I looked at the course map and saw that they had managed to make the course different enough (running it backwards and with some new trails) that it would be interesting after all. 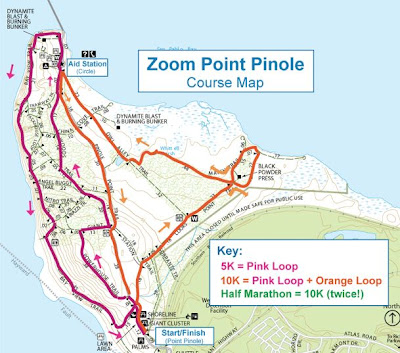 So Mrs Notthat and I signed up for the 10K, which since it was half of the Half Marathon course at about 10.6 miles, was more accurately a Quarter Marathon.

The weather at Point Pinole Park, which is a peninsula with cold water around it, can vary a lot. On this day it wasn't too bad - it was cool but with only a small breeze (which picked up a bit when you were actually along the shore and not protected by the trees). 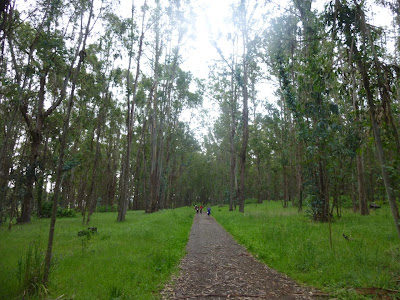 A lot of the course is in the trees, which I never get tired of. 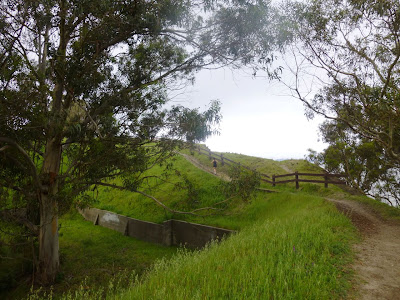 This is only the second time that I've been able to run this short bit of single-track that's easily my favorite part of the trails out here (as long as I remember to duck under the low branch that keeps me on my toes).

The course is more or less two different 5K loops, and at the end of the first loop, we are back in the start/finish area, where we head back out to do the second of the loops.

Back at the Way Too Cool race, there is an infamous climb called Goat Hill. It has no goats (they got the "Hill" part right though). Near the start of that second loop here, we found the goats. A lot of goats. 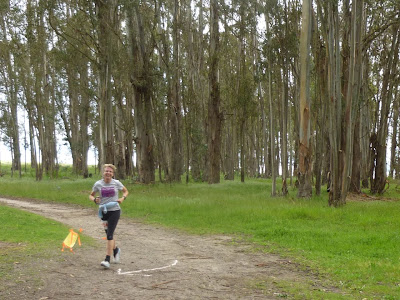 And then a bit after that I found Mrs Notthat, comfortably ahead of me (no surprise, and no, there is no way I'm going to make an "old goat" joke here). 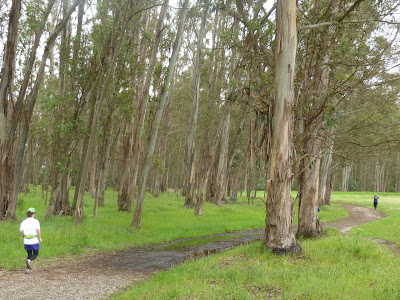 The Perpetual Mud Hole was present on this second loop. Being a veteran of this course, I knew about the bypass trail and managed to dodge this.

And before I knew it I was back at the first aid station a second time. This meant there was only about a mile left, most of which was paved and slightly uphill though. 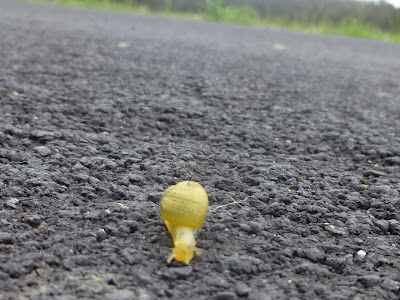 The pavement had many of these tiny yellow snails, a lot of which had been squished by the time I came through. (They were really hard to avoid, plus they were a bit obnoxious with their taunting.) 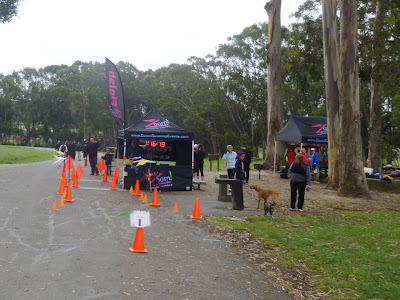 Once I managed to survive the Yellow Snail Gauntlet, I was at the finish line.

My time was not good for a 10K. However, since this was really a Quarter Marathon, my time was… still not good. 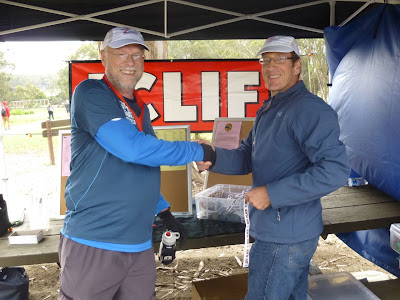 But good enough to win a third place age group medal. (OK, truth be told, I could have taken three hours to finish and I would have won this since there were only three in my age group.)

Here's kind of a funny thing about the age groups in this race; there were 34 Quarter Marathon finishers. Nearly a third of them (11) were in the age group that Mrs Notthat and I share. Unfortunately for her, 8 of them were women, with 3 of them being pretty fast (she got 4th, and beat 4 others, but no bonus medal, and I'm not gloating about that, at least not when she's looking). 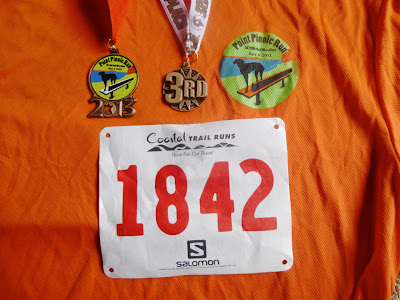 The race was a blast. And I loved the shirt with the dog on the bench (which looks a lot like our dog, other than our dog would never stand still like that, ever).

This race proved that even minor changes to a course can make it feel very different, and also that the Point Pinole trails are fun no matter which way you run them.

PS: You can see more of my pictures here.
Posted by notthatlucas at 6:44 PM 6 comments: