At least they got the "breeze" part right

Today was Brazen Racing's Summer Breeze race. It was at the same place that we ran the Bay Breeze race earlier in the year (click here for my write-up of that event). I'm not going to make the "Summer Freeze" joke, but I will say that the chances of anyone having issues due to heat exhaustion were very minimal. And actually, considering it is August, cool running weather is a good thing. But I doubt anyone would have missed the "breeze."

Mrs Notthat ran the Half Marathon while I worked at the first aid station with Aicirt and her daughter Aras (not their real names). 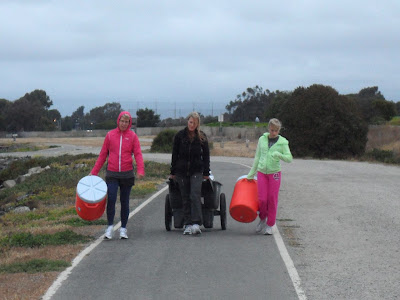 Working the first aid station had a few challenges:

• You couldn't drive to it. This meant we had to use wheelbarrows and walk the stuff 1.5 miles to the 5K turn-around to set up. This picture shows Mrs Notthat (who, by walking out with us, actually ended up doing a 5K as a warm up to her Half Marathon - she's an animal!), Aicirt, and Aras.

• It had to be set up first since it was the first one the runners would reach. So there was a bit of a hurry to get it up and running.

• It had to stay up the longest since it was also the last aid station the runners would get to. 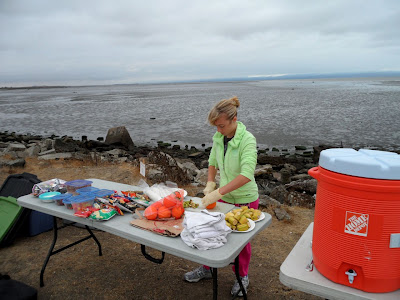 Aicirt took back one of the wheelbarrows to get the rest of the water. (This means she ended up doing a 10K!) Aras artfully cut up the fruit and set out the other foods, often having to chase them down when a gust would come up. 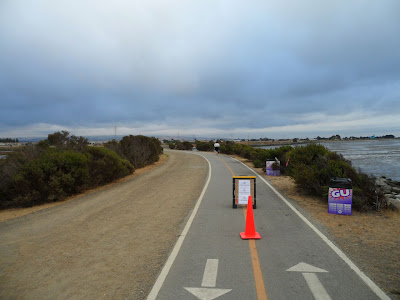 That cone represents the 5K turn-around. All of the races were out-and-back with turn-arounds at the halfway points. That 5K sign blew over several times. The orange cone, however, stood its ground.

Note: I promised Mr Brazen that I would tackle any 5K runners that ran past this sign. (You could tell who they were by the color of the numbers on their bib.) Sadly, I failed for one runner, a nice woman who thought it was a bit amusing to have missed this sign. I doubt she would have thought it amusing if she had gotten very far, say, to the 10K turn-around. I know I wouldn't have. 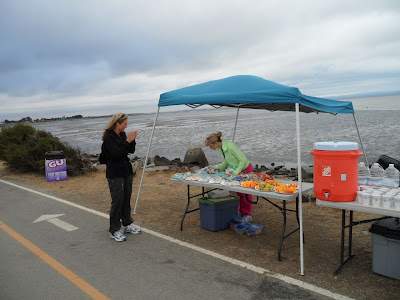 The aid station is all set up and ready to go. And "go" that shade did. We ended up collapsing it back down since it was more keen on pretending to be a kite than providing any kind of shelter. 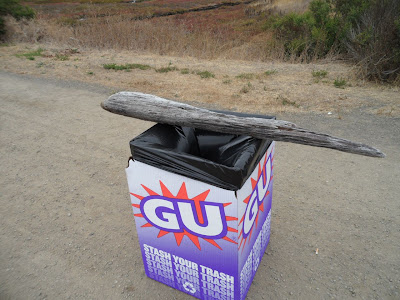 Improvised weights were used to secure the trash boxes. 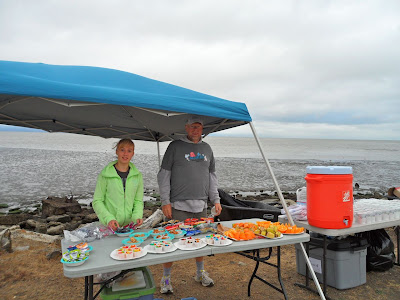 Aras and The Blog waiting for our first customers. (Another fun thing about the first aid station is that you get to see ALL the runners. Another challenging thing is that they all tend to show up at the same time.) 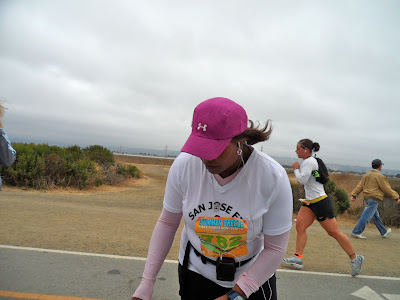 I got about 270 pictures of runners going past us (which I will post at Brazen's Picassa website - I missed groups of runners though when things got really busy and I had to help fill cups, and then later when my camera battery died).

There were a number of San Jose Fitters in the race, although I missed getting pictures of many of them. I did manage to get Anert though. 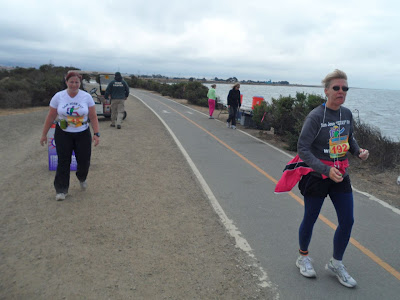 And Ahterb and Mrs Notthat (sorry that I caught you making such an odd face - I know I know, I'll make my bed on the deck tonight for posting this). In the background to the left you see the back of Yaj, a park ranger with a golf cart and a soft heart - he helped us immensely by hauling back some heavy/bulky stuff for us, making it easier for us to wheel all of this back out once we were done. 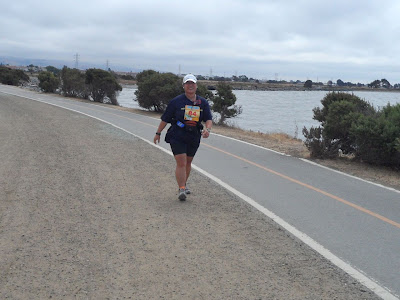 Fitter Anrol, enjoying the race (or just happy to be so close to being done). 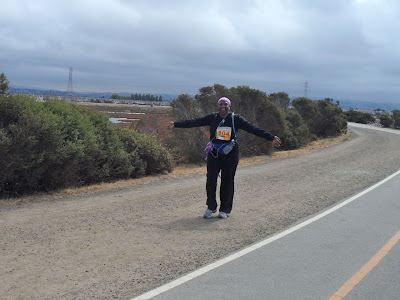 A Fitter whose name completely escapes me. (Next time you see me, you have my permission to tie my shoe laces together. Sorry!) 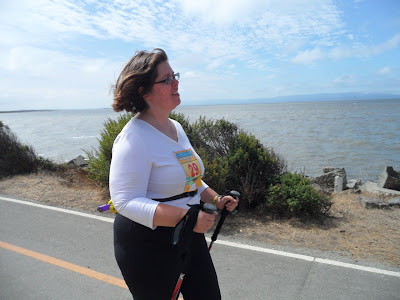 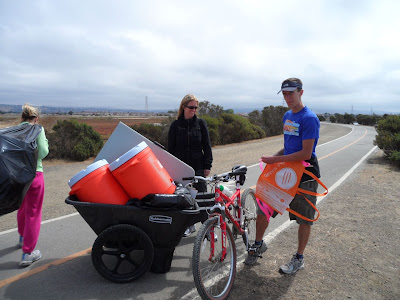 And then finally the Sweeper came through. This was our signal that the last runner had been through and we could pack up and head back. It maybe took us 30 to 40 seconds to do this.

It was a great day. Mrs Notthat set a personal record with her time (even though she fought a cramp for a lot of the way - this was a common theme since the coolness made it hard for some to get warmed up very well). We had a great time at the aid station - Aras was great at being perky even though she was very cold.

Thanks to Mr and Mrs Brazen for putting on another successful and fun event. I can't wait for Drag-N-Fly in a few weeks.

I think the unknown name is Leslie. Thanks for your support!

Excellent report! I had a great time (wo)manning the aid station at the start/finish, but you had much more hardcore duty... We had lots of shelter at the main picnic area - I walked over the little knoll to the start/finish and realized how much more wind and chill y'all had to endure! Thanks for helping and see you out at another Brazen event!

Mr. NotThat you are finally getting smart here. Handing out oranges and trackling wayward narrow focused runners seems somewhat easier than actually, you know, running. How was last night on the back porch?

That's LESLIE!!!
And thanks for cleverly disguising my name.

So how seriously does Leslie take her revenge? (And I don't see her name in the results list - does she race using an alias?)

DAK: "Trackling?" No wonder LA doesn't have a football team anymore. The back porch is OK once you get the raccoons to leave you alone.

Gees, you guys are something else.
Congrats to Mrs. Notthat. Now we need to see FIRST DAY OF SCHOOL photos, Soon, or Sooner.