The Dirty Dozen is back! And still dirty!

The Brazen Racing Dirty Dozen event/festival/torture-fest was last run in July of 2019. This race fills a niche that most normal runners would argue doesn't really need to be filled. Races have a start line, a finish line, and that's it. You try to get from one line to the other as quickly as you can.

There are a lot of runners though that know quite well what niche events like this (and the Coastal SF One Day) fill. It's a niche where you get to define your race's distance. You get to take breaks. Eat. Visit. Or you can push hard and cover a distance you might not otherwise think possible. Many get their first Half Marathon, Marathon, or Ultra distance finish. (Like me getting a 100K finish!)

The 2022 Dirty Dozen was its 11th running. In a throwback to the first running in 2010, this year's version was simplified to have only timed races (all other years had 5K and 10K races scattered throughout the day as a way to break things up by tossing fresh legs onto the course).

This year, runners had the choice of three hour, six hour, or the race's namesake dozen hour events. There were two and three person team options for each event. All events started at 7 AM. All events used the same 3.4 mile loop and had available a smaller 0.4 mile loop for the last hour, allowing you to get more distance while reducing the risk of the final horn blowing while you were only part way through a loop. 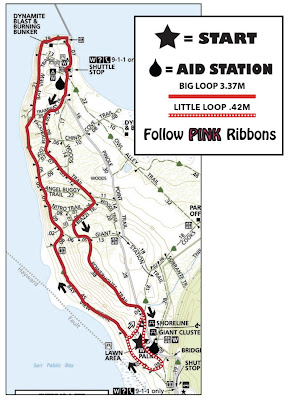 In my case, I had two goals:

With the Byxbee parkrun going until a bit after 9 AM, I likely wouldn't be able to head out to Dirty Dozen until about 10 AM, and it's an hour drive to get to Point Pinole. So my realistic earliest start time would be about 11 AM. As long as you don't mind officially starting your race time at 7 AM, you can physically start whenever you want - in my case, I headed out at 11 AM on my first loop. When I finished that loop, I had officially taken nearly five hours to complete it.

IMPORTANT BIT: If you start late, DON'T cross the start/finish line before you start your loop - if you do, you will get credit for a loop you didn't do, and Clocky will be quite put out.

By starting late, my only real option was to enter the 12-hour event.  It meant I had plenty of time (eight hours) to not only reach my goal of a Half Marathon, but have lots of time left over in the wildly unlikely case of me feeling perky and wanting to keep going. (Spoiler alert: HA! As if!)

The first exciting thing upon arrival was picking up my bib. Which couldn't be found. So I was given a loaner bib and told to go tell Sam in the timing tent.

As soon as Sam saw me, he said "I'll bet you're looking for your bib." They had been using it to test the timing mats. For someone who had just shown up, my bib had already finished many laps. Sadly, they made me use the loaner bib so I could finish my own laps.

When I left Redwood City, it was sunny and seriously warming up. While driving north to Point Pinole though, the marine layer quickly took over and the temperatures dropped. I had not brought any long sleeves and started to wonder if I was going to freeze (it's happened there before). The marine layer continued dominating the weather until I got within about five miles of the race, when suddenly it retreated, the sun started blazing, and my fears changed from freezing to getting roasted (it's happened there before).

While it was sunny all afternoon, it was not excessively hot and the constant breeze helped keep things tolerable.

A surprise was that we got to use the trail that more closely follows the coast. This avoids a dumb little hill (seriously, a very small hill, but one that becomes extremely irritating the more times you have to climb it) and puts us on much more fun trails.

At about the two mile point in the loop, you hit an aid station. I was carrying a small bottle, so this turned out to be very useful for getting that bottle filled.

One thing worth pointing out, there are FOUR outhouses along the course. This can be a big deal (and was for me on my fourth lap).

The second half of the course spends a lot of time in a grove of eucalyptus trees. If you've spent any time around these trees, you know how creepy they can sound. They creak. They squeak. They taunt you with the many little acorn-like things they drop on the trail.

But they are glorious.

Clocky likes to wander randomly around the course, tormenting the runners. Or confusing them. "Why is there a compass on the course?" If you really want to wind up Clocky (ha ha ha - clock humor), ask what part of Canada makes the best compasses. (And then run. Fast.)

My first lap weirdly was my fastest (HA!). It was odd to be running a lap with others who had been out there for four hours already - it made me feel a bit like an elite runner, at least until I would get passed like I was standing still by an actual elite runner. (It was a funny coincidence that the song "9 to 5" started playing as I finished that lap, with Sam remarking how the 9 to 5 lifestyle suits me.)

My second lap wasn't too bad - I was able to run most of it, but by the end, my right knee was complaining bitterly. I still managed to look like a proper runner for this picture.

At this point, I started to doubt that four laps were going to happen. Two laps were an ultra-10K. Three laps would get me to double-digit mileage, which would be an OK goal - it was something I hadn't done in a couple of years. I was telling myself that three laps might be my limit. I started to get down a bit.

Passing through the festival area though has a way of picking you up. I knew running was no longer happening, but felt like walking was still pretty tolerable. So I headed out on my third lap and would decide on a fourth once that was done.

One thing that came up during my third lap was that I realized I had made a big mistake wearing no-show socks. Back in the before days, I never wore them - they are a fairly recent addition to my wardrobe. I wear them at 5Ks, and have no issues. But after about nine miles, the top of the back of my shoe was digging into my foot and had created a raw spot.

I had forgotten that getting tired was not the only fallout of increasing mileage.

So, before starting my fourth (and I was pretty sure at that point, my last) loop, I stopped, sat down, took off my shoe, and stretched that sock enough that it provided protection. And that worked. But sitting on that chair felt really good. REALLY good.

Fortunately Janeth came by and started explaining the evils of chairs, so I struggled back to my feet and headed back out.

My fourth loop was uneventful, other than an outhouse stop.

And that was it. I got four laps and officially 13.48 miles. I had a minor, self-inflicted heel abrasion, a knee that was determined to keep me from considering a fifth lap, and many muscles that were feeling unfamiliar soreness.

But I was happy. And hungry. One of the best things about this race is the post-race BBQ. (On my fourth lap, the aid station had pizza, which was wildly tempting. There is something very poetic about eating a slice of pizza while slogging around the course in the middle of a race. But I chose to save myself for the BBQ.)

The medal is a work of art. There are 12 spokes, each with a keyword written on them. Spokes 1 through 12: Drink. Walk. Eat. Rest. Cheer. BBQ. Big Loop. Run More. Walk More. Little Loop. Finish! Then, a bit oddly, Run at number 12.

Maybe Clocky is a compass after all.

I ended up being dead last among the 12-hour men. (Heck, I would have tied for dead last among 6-hour men.) But I was second in my age group. Funny thing for those of you that think getting older makes it easier to win age group awards; since this race I've moved into the 65-69 age group. If I had been in that age group for this race, I would have been fifth. There may not be as many older people in these races, but the ones that are there are really good. 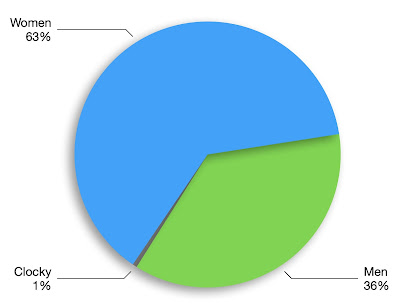 One thing that surprised me is that there were significantly more women in the race than men. The three-hour was nearly even, but the six-hour and twelve-hour had nearly twice as many women as men. I wondered if this was a fluke coming out of the pandemic, but in 2019 (the last time the race happened), there was a similar female majority in the timed events.

I had never noticed this before, and really can't explain it.

Clocky probably has something to do with it though.

Posted by notthatlucas at 3:10 PM