It all started because I keep myself well hydrated at work. I drink a LOT of water during the day. We have those standard water coolers that use the five gallon water bottles, and because I drink a lot of water, I end up having to change the bottles fairly often. At the beginning of the year, I started saving the plastic caps from the water bottles - I don't know why; they are orange and kind of nice looking, but still.

In any case, a few weeks ago I realized I had way too many of these caps (over 60) and needed to do something with them. I thought it would be cool to use them as orange "pixels" to "draw" "images" with. A coworker came up with the idea of putting little squares of magnetic tape on each one, and sticking them to a sheet of metal. 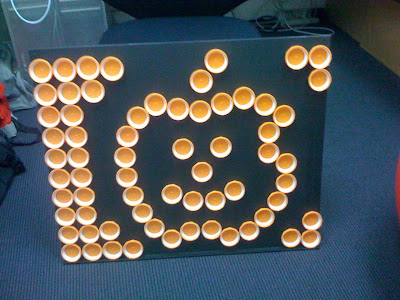 I remembered I had an old top to a lizard cage (thanks Lihp - not his real name), so I painted its underside black and spent a couple of hours cutting and sticking bits of magnetic tape to these caps. 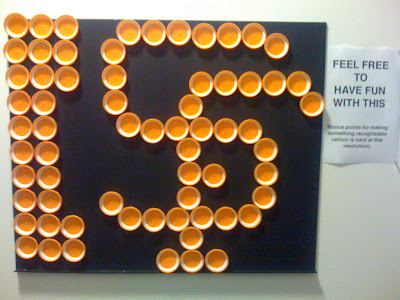 This one came out OK (and was the first one hanging on the wall outside my office), but it was before I had any idea what to do with the leftover pixels. 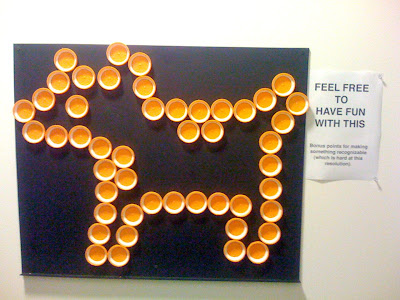 Then I thought of the low resolution icons that computers used to have. I really doubted anyone would work out what this was, but a geek passing the hallway guessed it immediately. (It is Dogcow, an image used in early Apple print dialogs to show print orientation. She (!) makes the sound "Moof" when excited. (Someone later used a few leftover pixels to give her a bone, which made me happy that they were able to recognize what it was, if not exactly who it was.) 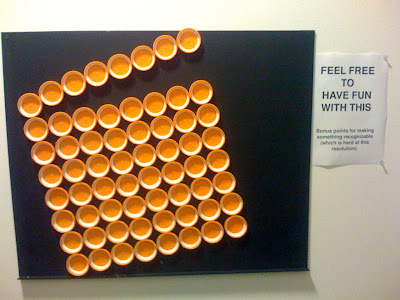 This one was pretty easy and nobody had much trouble working it out. (It's the Final Cut Pro logo. Sort of.)

Then we found out that our walls were to be painted. This "art" piece was extremely unofficial and I feared for its safety, so I unscrewed it from the wall and hoped for the best. Fortunately, coworker Yma was still at work when the painters noticed the holes in the wall and started muttering vague threats. Yma showed them the "art" piece and they were impressed (well, at least relieved that they didn't have to patch the holes) and left her with a short lecture about the proper use of mollies. 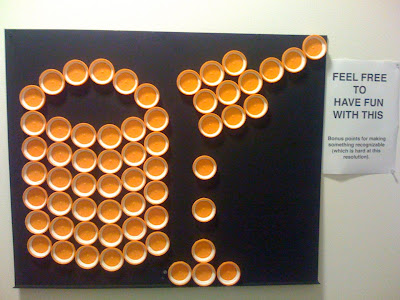 In honor of them, I did this. Sadly, nobody has been able to work out what it is.

So it's probably not art, but it is kind of fun. (And would be more fun if we'd start getting water bottles with different colored caps.)

PS: It's a paint bucket with a paint brush dripping paint next to it.
Posted by notthatlucas at 9:56 PM

OH yes, this is Art. And remember, I work in museums and I should know...

I was thinking the container is the National League Pennant and the wand is a bat and the dropping balls are the balls dropping, all right, but not in the container that has the pennant. I hate the Phillies by the way. These designs are very cool. When you finish the one with Isabella being sworn in as Supreme Court Justice, I'll buy it from you.